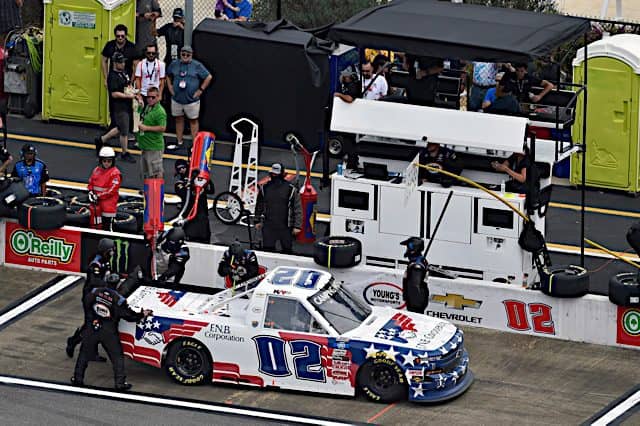 Eddie Troconis, crew chief for Kris Wright’s No. 02 in the NASCAR Camping World Truck Series, has been suspended by NASCAR indefinitely for a behavioral violation.

According to the penalty report from NASCAR, Troconis violated sections 12.8.1.c of the rulebook.

A violation of that section can be attributed to any of the following:

According to NASCAR.com, the sanctioning body confirmed the violation was not a competition or on-track-related incident.

Troconis has made 142 Truck Series starts as a crew chief since 2012.

Kris Wright and the No. 02 truck finished 36th last weekend at Talladega after a wreck.

Anyone know why this guy got suspended? I’ve done a few google searches and can’t find any specifics..

Agree but I guess NASCAR has to play the “we care” role so as not to piss off the Twitter crowd which will then scare the Fortune 500 crowd.

Must have been hallucinating again, I could have sworn there was a comment I was replying too.

They have a few rules that I see every weekend watching the races truck, Xfinity or cup so if they are going to enforce what ever it was they should practice those rules to everyone. Not just pick and choose who they don’t want to win the championship. One person gets points taken away for saying a naughty word and then Wallace said Bullshit last week they said nothing I could say alot more but they can take their rules and stick them up their a!!.