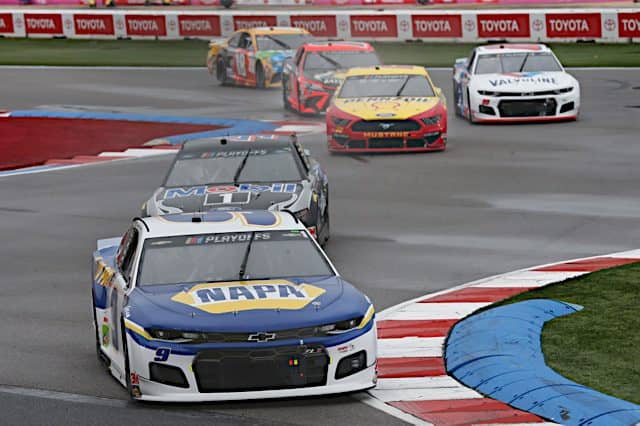 Will the NASCAR Cup Series eventually exclusively have races on Peacock?

This week NBC revealed it will be streaming the final three Cup races of the season on Peacock.

The move comes after a fiasco last week when NBC reportedly attempted to force Youtube TV to bundle Peacock as part of all of its packages. Peacock, the little streaming service that couldn’t, has done a whole lot of … uh, couldn’ting in the couple of years since launch, being a huge money loser its first couple of years of existence.

The reality is that NBC Universal, unlike its contemporaries CBS-Viacom, Disney and Time Warner, just does not have enough in-house content to justify a streaming service, and so the solution is to pay a handful of companies a lot of money to use their content on the platform. The Office was a good show and a lot of people watched it on Netflix. A 10-year-old network comedy is not something to build a streaming service around, and yet that is probably the biggest in-house brand NBCU has at its disposal.

Earlier this year, NBCU essentially bought the WWE Network in the United States. In exchange for poorly timed commercial breaks, technical glitches abound, and absolutely butchering the largely uncensored archives, WWE will be paid a little over a billion dollars over five years. Financially, the move doesn’t make sense, as the WWE Network had 1.6 million subscribers worldwide in October 2020. Assuming all of those were paying $10 per month in the United States and absolutely none of them were subscribed to Peacock as well, all of which they were not, WWE Network is a money sink for the company. But having that content is useful when looked at as one of many reasons to subscribe to Peacock.

See also
Truckin' Thursdays: No One Safe Heading to Martinsville

Unless there was a mechanical issue the team has not been forthcoming about, there’s no reason for any driver to just drive head on into a wreck like that. That was something you’d see a lot in the ‘80s and ‘90s, when cautions were race-to-the-line. There were so many bad accidents back in those days because of that rule, most infamously at Pocono Raceway in 1988 when journeyman Jocko Maggiacomo T-boned Bobby Allison and prematurely ended the career of one of the greatest drivers in NASCAR history.

But even back then, it was dumb for an underfunded driver to head full steam into a wreck like that so far back from the pack as they’d pass anybody still there regardless due to attrition.

Cobb really needs to either get her head in the game and drive like a 10-year veteran instead of a 10-year-old or step aside and let someone else pay to get in her truck. That was a very reckless move and could have seriously injured somebody. Like Red Cup Man.

Maybe it’s time for no more Talladega Superspeedway in the playoffs?

It was brought up last week in an article by Joy Tomlinson on this website that Talladega Superspeedway should not be in the NASCAR Camping World Truck Series’ Round of 8.

I’m going to extend that point and say that Talladega should not be in the playoffs in any series at all.

Superspeedway racing just does not work well in the playoffs. The drivers trying to conserve and point their way into the next round aren’t going to be as aggressive as they would be otherwise, especially at the end of the first two stages.

And of course, running just inches apart in giant packs just takes way too much out of a driver’s hands. NASCAR has already determined that Talladega is ill suited as a cut-off race, what’s really the difference at the end of the day between the two distinctions?

If all three races this past weekend were in the regular season, there would be a lot of added intrigue to all three series’ playoff fields. Suddenly Tate Fogleman would have a decent chance at making the playoffs in Trucks, Bubba Wallace would be a playoff Cup driver, and Brandon Brown would have made the playoffs for the second consecutive year in Xfinity.

There’s actually a very simple solution to moving Talladega out of the playoffs: move the summer race at Daytona International Speedway back to July 4 weekend and move Talladega to its current place as the regular season finale. If a driver has a bad race and gets knocked out of a playoff spot there, they had 25 more chances to make it in and shouldn’t be there anyway. Meanwhile, a driver who gets caught up in a big wreck in the playoffs at Talladega has put their entire season in a hole.

See also
Fire on Fridays: Time to Take Talladega Out of the NASCAR Truck Playoffs

Who can avoid elimination at the Charlotte Motor Speedway ROVAL?

This weekend marks the fourth time the traditional October race weekend at Charlotte will be conducted on the ROVAL layout.

The first weekend was a Ford sweep, with Chase Briscoe winning the Xfinity race and Ryan Blaney stealing the Cup win after Martin Truex Jr. and Jimmie Johnson wrecked in the final chicane. Ever since then, however, the Xfinity race has been won twice by AJ Allmendinger, and the Cup race has had some big runs by Chase Elliott result in big victories.

Expect Kyle Larson, Joey Logano, Brad Keselowski and Martin Truex Jr. to play it fairly safe. All four drivers have decent cushions from the cut-off line, and with the attrition this race usually brings, they should be safe if they can just stay out of trouble.

As far as who can win on Sunday, my pick is William Byron. He’s more than due for a victory, he needs a victory, and he’s got a tremendous advantage over most of the field with just how above the competition Hendrick Motorsports has been on road courses in recent year

I have tried the free version of Peacock, and they would have to pay ME for anything else! The interruptions and freeze ups are ridiculous. Trying to watch Motor Mouths when I get kicked off the service literally every 10 minutes make anything unwatchable. I certainly don’t expect that the pay for version would be any improvement. I guess I will just not watch nascar anymore Oh well, Indy cars and F1 are still free.

That would be a huge gamble for NASCAR to show races exclusively on a streaming service. They are already starving for viewers and ratings. I don’t see how making it more difficult for viewers to watch would help.

I see your point with Talladega but the whole playoff process is kind of like a race at Talladega. One bad decision or problem in one race can kill a season of excellence, so it’s kind of fitting.

“There were so many bad accidents back in those days because of that rule, most infamously at Pocono Raceway in 1988 when journeyman Jocko Maggiacomo T-boned Bobby Allison and prematurely ended the career of one of the greatest drivers in NASCAR history.

But even back then, it was dumb for an underfunded driver to head full steam into a wreck like that so far back from the pack as they’d pass anybody still there regardless due to attrition.”

Micheal Finlay, you have no idea what you’re talking about! Allison’s crash happened on the first lap, and Jocko was only 5 cars behind Allison at the start. Allison had a tire going down on the pace lap, but instead of pitting, he decided to take the start and then pit. He didn’t make it. Allison’s tire let go coming through the tunnel turn and he spun, blocking the track and leaving Jocko, blinded by tire smoke and close behind, no where to go.

I know Jocko, he was close friends with Allison, and was sick over what happened. They became friends in the 70’s, when Jocko was racing AMC’s (a former Penske Javelin in Trans Am, and a Matador in Cup), and worked with Penske and Allison on developing the AMC’s. Jocko has endured years of hatred and attacks from people like you, who have no idea what you’re talking about, and have blamed him for an accident he had little or no control over. Because of the treatment he received from fans, how he was portrayed in the media, and how upset he was about what the wreck had done to his friend, shortly after Jocko completely turned his back on racing.

Jocko was a second generation driver, his father was an accomplished modified racer in the Northeast, and Jocko was a successful road racer, including winning the 76 Trans Am Championship, and an IMSA win. He may not have raced full time in Cup, concentrating mainly on northeast races and road races at Riverside and The Glen, but he was more than a “journeyman driver”.