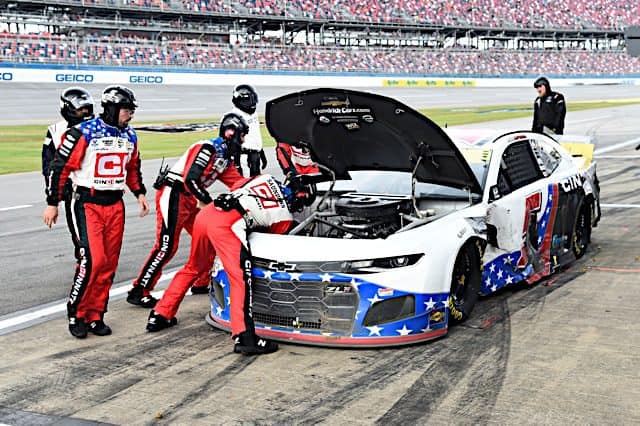 Kyle Larson wound up crashing during a feverish attempt to record a fast enough lap to avoid being parked by the NASCAR damaged vehicle policy in the NASCAR Cup Series race at Talladega Superspeedway. Does the current rule need any tweaking?

Josh Roller: I’ve noticed when crews are repairing a car while under the clock, they seem a bit frantic. This is understandable. Currently, the damaged vehicle policy clock starts once the car enters pit road and remains on until the car exits. So the clock is running before the crews can even touch the car. The two changes I’d make to the rule would be not turning on the clock until the car is stationary in the pit box. An official would be dispatched to each team on the DVP clock with a tablet that displays a countdown clock. The clock then runs until the car begins to move. I would also give teams an extra minute (seven minutes total) to repair the car. These changes would help the frantic nature of some of these repairs and give teams and NASCAR officials more time to give the car a good look before it reenters the track to attempt to make minimum speed.

Luken Glover: The clock definitely needs to start when the crew starts touching the car and stop when they are done. Teams are losing valuable time when the clock runs before the car even gets to the stall. NASCAR should also increase the clock by a minute or two. This rule does challenge crews and display just how quick they have to be, but six minutes seems to be rushing them. The No. 5 team was in a frenzy to get Kyle Larson back on track to meet minimum speed, and it led to Larson going out with a car not capable to run those speeds lap after lap without more repairs. The clock needs less tweaking than other rules, but it could certainly use some altering.

Frank Velat: Not a fan of this rule as it stands. It’s true that we don’t need a bunch of taped-up, fender-less cars becoming rolling roadblocks, but the amount of time given to teams is insufficient. The goal here is to make sure that the cars aren’t a safety hazard, which Larson’s car certainly was last week. Give the crews more time to be deliberate and focused, rather than forcing them to hurry and possibly cut corners that could be more dangerous than the original damage.

Stephen Stumpf: The DVP is a good idea on paper, but it needs some tweaking. The idea of the DVP is to remove wounded cars from the race, which would create less hazards on the track and prevent extra debris cautions. However, Larson cut down a tire and crashed a second time in an attempt to stay in the race. The low time limit leads to scenarios where a team haphazardly makes repairs in the essence of time, often sacrificing other necessary repairs in order to stay in the race. To improve this rule, have no time limits on the work that teams can do on a damaged car. But once a driver falls a certain number of laps down, they should be parked for the rest of the race.

A rumor has surfaced that Tony Stewart is interested in bringing Marco Andretti on board for a limited Xfinity Series schedule. Would Andretti be successful in NASCAR?

Roller: Marco Andretti wouldn’t set the NASCAR world on fire, but he would contend for race wins, particularly on ovals. He was always better on ovals in the NTT IndyCar Series, anyway. It may take him some time to get up to speed, but if his performances in the Camping World SRX Series are any indication, Andretti can adapt and adjust rapidly. The instinct is to put IndyCar drivers in road course races first, but in Andretti’s case, ovals need to be his jumping-off point and focus if he makes any NASCAR starts.

Stumpf: Andretti’s last IndyCar win was more than a decade ago, and he would be thrusting himself into a disposition in which he has almost no experience racing. That said, he did look promising in the six-race SRX schedule this season, and he has clearly shown his desire to race in stock cars. The potential is there for him to succeed, but he will have a steep learning curve if he and Stewart-Haas Racing decide to pursue this opportunity.

Velat: The IndyCar-to-NASCAR pipeline hasn’t seen a great deal of success. Tony Stewart and Juan Pablo Montoya are more of the exception while many other capable drivers like Sam Hornish Jr., Patrick Carpentier, Danica Patrick and Jacques Villeneuve just haven’t seen that same success. Unfortunately, I see Andretti falling into that second group. He never set open-wheel racing on fire, and while he may run well on a road course, the transition would likely be a difficult one.

Glover: Different drivers have different time spans of how quickly they adapt to another series. Some don’t adapt at all. Andretti’s style and his speed in SRX show he has the potential to mesh well with a stock car on ovals. Two IndyCar drivers who made the jump this season were Santino Ferrucci and Sage Karam. Both of them appeared to pick up on things quickly, especially on ovals. Tracks like Bristol Motor Speedway and Richmond Raceway would present good opportunities for Andretti, and he has the potential to pick up on things at other tracks in a short amount of time as well.

Kevin Harvick, William Byron, Christopher Bell and Alex Bowman are on the brink of being eliminated from the Cup playoffs after this weekend at the Charlotte Motor Speedway ROVAL. Will any of them be able to save themselves, and who would they bump?

Velat: Kevin Harvick will not be bumping anyone. The veteran driver has just one road course win in the past decade, and it won’t happen this weekend, either. It’s unfortunate, but this has just not been his year. The No. 4 group has bigger issues than not winning the championship. It can’t even win a race. I wouldn’t have imagined such a thing at the beginning of the year, but here we are. The four drivers on the outside right now will still be there after the checkered flag falls.

Glover: Harvick certainly has the ability to point his way into the Round of 8, despite his struggles this season. He is the only one who could likely do so. However, the other three would not be surprise winners. Christopher Bell has had a lot of success on road courses this season, with his lone win coming at the Daytona International Speedway road course. William Byron has led a combined 50 laps in the last two races at the ROVAL, with back-to-back sixth-place finishes. Alex Bowman went on a memorable charge in 2019 to finish second. I’m going with Harvick pointing his way in over Kyle Busch. But as we’ve seen in the past, anything can happen.

Stumpf: I don’t see any of the bottom four pointing their way in on points unless someone in the danger zone gets knocked out of the race. At only nine points behind the cutline, Harvick is within striking distance, but his performances on road courses this season give me little hope that he could reach the Round of 8 by outrunning his competition. The only chance for Harvick and Bell to make it on points is if one or more drivers are unable to finish. Byron and Bowman have to win.

Roller: Harvick is the only driver below the cutline who has a decent shot at pointing his way into the next round. If he does point his way into the Round of 8, it’s Busch he’ll likely bump out. Busch has horrendous luck on the ROVAL. His best finish is 30th, and he did not finish two of the three races. That’s going to be in the back of Busch’s mind, and on the other side of the coin, Harvick’s worst finish in three races is 11th. He’ll have all the confidence.

Formula 1 is reportedly eyeing another event in the United States, possibly on a street course that includes the Las Vegas strip. Are three races in America too many, or is it essential to generate interest?

Stumpf: U.S. interest in Formula 1 has skyrocketed this season. Due in part to the Drive to Survive Netflix series, the ESPN telecasts of races have been smashing the ratings of years past. The U.S. Grand Prix at Circuit of the Americas later this month is going to be a sold-out crowd. With this newfound popularity, the demand for three races is certainly there. And it is important for F1 to capitalize on the demand while it is still there.

Glover: With both NASCAR and IndyCar being the main attractions in America, three races might be hard to do depending on where they fall on the schedule. A race in Vegas would generate a lot of interest and could make for a great addition to Miami. A third track could absolutely be plausible, but it depends on the market and what other sporting events are going on in the country.

Roller: Two F1 races in the U.S. will work fine. Three will borderline overcrowd the American market. The way to make three races work would be to make sure all three tracks produce three different races, be in major tourist markets and be in three different parts of the country. If COTA is to be included on the F1 calendar in the future with Miami, a race in Vegas or Los Angeles (like Long Beach) will suit just fine. Those three locations are far enough apart from one another and would serve the U.S. well. Putting the third race in the Northeast would be a mistake. F1 would be ignoring the West and overcrowding the Eastern market.

Velat: For years, the U.S. lacked any F1 presence, and now it’s become the No. 1 target. There’s already too many races on the F1 schedule, and for one country to feature three events in one year is overkill. Many Americans have the attention span of a gnat, and it’s hard to make any event seem like a big deal when there are two more just like it. If there were three Super Bowls every year, it wouldn’t be the spectacle that it is today. Less is more; more just cheapens the value.

I like the intention of the damaged vehicle policy. I suppose it would be OK to only count the time the car is being worked on and maybe give them another minute or two, but that will just result in more of the same. The real purpose of the rule is to keep teams from letting their own selfishness ruin someone else’s day or negatively affect the flow of the race. Do you really think another minute would have helped Larson’s car? It was a piece of crap after the first wreck and they should have went right to the hauler (had it not been a playoff race they probably would have).

Harvick can make the cut if someone else above him has an issue (and someone probably will) or if he does something unethical (poor sportsman) like he did at Talladega. The others under the cut line must win or they are finished.