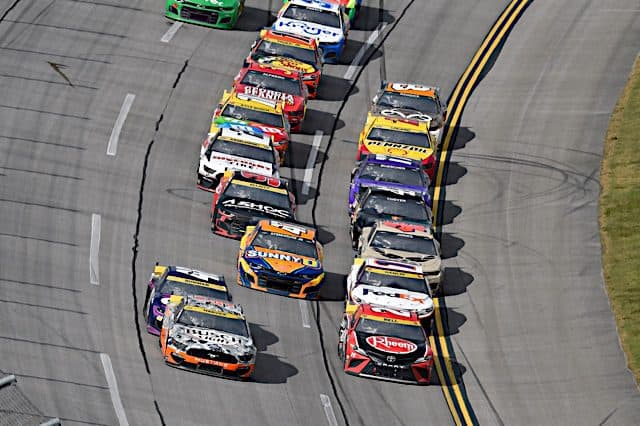 Should the rules for a race being deemed “official” change for the playoffs? – Justice W., Mobile, Alabama

A fair and intriguing question, and especially topical.

On paper, the playoffs should never cut corners. Whether it’s ending a stage under caution to ending races early like we saw on Monday (Oct. 4), neither scenario is the preference. But sometimes it’s the necessity.

It’s a catch 22: stay another full day in Talladega, lose a day to prepare for the Charlotte Motor Speedway ROVAL and possibly get the full race in or end the race early per the rulebook and get the heck out of Alabama? Something tells me most drivers and teams would vote for the latter, while fans would prefer the former.

The only likely scenario where the former could be accomplished and most would be on the same page would be at Charlotte or even Darlington Raceway/Martinsville Speedway/any close track to the hub of most teams. But if you’re going to do it for one track or race, you’d might as well do it for every one.

That leads us to the regular season vs. playoffs argument. What if the spring Las Vegas Motor Speedway race ended after stage two, but the playoff race was required to go the distance? No matter of rain, a tornado, dust storm or if the Stratosphere hotel decided to grow legs, walk off the strip and lay down on the frontstretch?

Being the host of the championship race, Phoenix Raceway would be a different situation entirely, and I do NOT envy being NASCAR in a scenario with inclement weather should that arise. But I’d still lean the way of doing everything the same way. Don’t change the race procedure for specific races that may mean more to some rather than others.

There’s enough slippery slopes for NASCAR officials to navigate through these days. They don’t need another.

The postponements this weekend could have been solved if the track has lights. Should every NASCAR track be required to have them installed? Alan P., Los Angeles, California

As NASCAR becomes more and more dependent on television (start times being the biggest factor with this topic), lights could and should be a necessity for hosting a Cup Series race for 2022 and beyond.

As it pertains to Talladega Superspeedway, lights may not have even mattered, as the forecast for Sunday night and Monday evening weren’t great. But for tracks like Dover International Speedway, Pocono Raceway and Michigan International Speedway, lights would likely eliminate any rush to dry the track and start the race before a window until sundown closes … plus, everybody’s favorite reporter Bob Pockrass of FOX Sports wouldn’t need to answer questions every single day about it.

In all seriousness, though, while the cost for installing lights is hefty, the multi-million dollar investment would be worthwhile from the sanctioning body’s and fans’ perspective.

But what about the tracks themselves? Each of the aforementioned venues now have only one Cup race per season. Could they justify spending millions of dollars to install lights at their facilities when dates have been taken away, seats have been taken away and they may use them?

Tough to say. If those races were to become night events, the answer is obvious: install lights. But if they stay during the day, things would get a bit messy and a Talladega situation may rear its head again.

simple one lap past halfway a race was legit. run as long as you can without incidents to crews, fans or officials. it’s rained all week here in west georgia.. i have sat through numerous rain delays at ams over the years. gone back on mondays. when ams was first lighted, the final race of the season was ran at like 11 pm at night cause of a weather window that opened.

unless they install lights at all tracks and run at any time of the day or night, weather will be an issue. but safety has to be first and foremost. we saw that mess in pouring rain earlier this year on road track.

Putting lights around 2 miles of track is not cheap or practical, particularly in the age of single events and possibly even alternating years at tracks. Also, TV are the ones that don’t want Saturday night races…that’s why the tracks with lights are running day races, sorry, late afternoon races in the east, you know, the time it rains every darn day in the southeast. DVR’s make a lot of problems go away, but I’m not sure how they count towards TV viewership numbers. Start the races at 1 on Sunday’s.

The problem with DVRs is that most are stuck in 2000 and can only record programs as they appear on the programming guide provided by Gracenote (formerly part of Tribune), the same service that has been providing TV listing since forever. Whatever TV Guide is these days may do it as well,. Neither updates on the fly. They wait for the station to provide information an update once a day. My DVR did get the update for Monday’s rescheduled race but does not treat Cup as a TV series so I can’t set it to record all races. I had to do it manually Same for Trucks but Xfinity does automatically record. As for delays, it does not update as races run long. I can set them to record an extra hour or two but when races get delayed three hours to the evening or switch from the broadcast network to the cable sports network, I am out of luck. At best, if I am out, I can try to find it on rerun (Fox Sports, NBC rerun on NBCSN) but often have to try to get the NBC Sports page or app to run. Good luck doing that smoothly. And, no way not to see the results blaring at you on the app.

This isn’t on NASCAR. Cable boxes and DVRs haven’t been updated sufficiently. And, with streaming the way more and more watch and where networks make money, they have no incentive, particularly since DVR viewers skip commercials and have little value to advertisers. This is true for all live sports and for shows that are scheduled after live sports like CBS’s Sunday night lineup. And, there is no reason to expect this to change in the future. there is no financial incentive for the networks to fix this.

The problem with keeping everyone there is the highway patrol, track security, workers, concession stands, all have to be there as well. One of the challenges is if a race encounters weather.
My suggestion, if you can start it 2 hours early and get most of it in, make that part of the next TV contract, disclose it to folks purchasing tickets, and give the track, not the TV partners, the option of starting earlier. Weather would not be as big a problem and the numbskulls that run the TV Networks would adjust.

You’d think the numbskulls at the networks would have figured it out by now. Maybe they’ll adjust the times in the new agreement? Maybe.