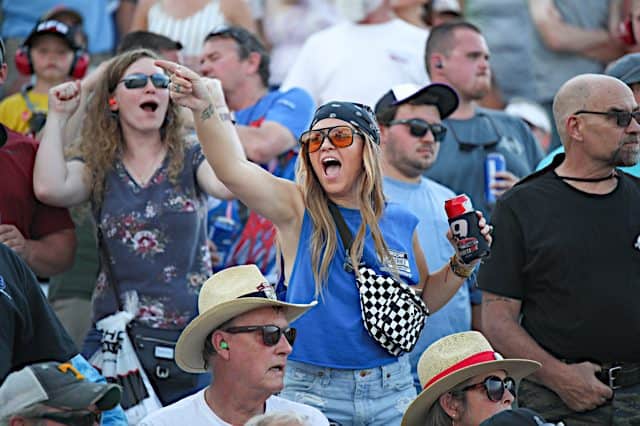 I’ve been running into some fascinating surprises over the past few months. Of course, nothing foreshadows these little moments, and, really, they seem to be tangential conversational detours. But what I’ve encountered is that many women are starting to watch Formula 1.

In one way, that could be considered an indictment toward NASCAR, that the sport has not continued to protect itself from the threat of F1 taking over. Such thinking is silly, of course, considering that the U.S. boasts a population of over 330 million. As NASCAR hovers around the 3 million per race average, it seems to have hit a median mark.

What makes such a statement important is the parallel that F1 has faced.  Close to three years ago, F1’s global research director, Matt Roberts, came clean about the sport’s demographics. In a Q&A, he asserted that the average age of an F1 fan was 40 years old.

While much can be gleaned from these numbers alone, two things are striking. The first is that the sport was failing to reach new fans. With just 14% of the fanbase residing in the under 25 demographic, Liberty Media recognized that it needed to focus on the youth market.

The second element that needs to be mentioned is that Roberts never mentions women. The omission would seem to imply that at that moment, the sport had concentrated its efforts of developing and keeping male fans. Such thinking is intrinsic in motorsport, as in many sports, where males have served as the hegemony – the practitioners, the mouthpieces, the owners and the gatekeepers.

In many ways, that is just how it has been.  But how things have been is not how things remain. For example, one thing that sports have recognized is that by ignoring the female demographic, they are wasting an opportunity to increase profits.

With F1, Ellie Norman, the head of the marketing department saw ways to attract both younger and females fans. The introduction of F1 eSports turned out to be a great way to attract the under 25 tech-savvy fans. In conjunction, the drivers themselves, especially someone like Lando Norris, became a big presence on social media, showing how drivers and fans can connect.

What may turn out to be the biggest boon for the sport is the Netflix “Drive to Survive” series that is now three seasons old. Beginning in 2019, DtS has been the gateway for many fans to get in touch with the sport.  What makes it vital is how fans can get to know the people in the sport in a way that goes beyond canned interviews or tasteful segments.

With DtS, fans become invested in the whole drama of the sport. It is through DtS that many of the women I have talked with have found a reason to watch the races. What makes their investment in F1 fun is that they not only watch the races and get just as wound up as any male but that they also remember the tidbits about the drivers that adds to the drams (like mentioning that Max Verstappen is dating Kelly Piquet who used to date former Toro Rosso driver Daniil Kvyat).

British journalist Ellie Bishop recognizes how the Drive to Survive series is a crucial element in gaining viewership, especially from women.

“This increase in viewership can safely be claimed to be in part due to the popularity of the Netflix docuseries ‘Drive to Survive,’” Bishop wrote. “The true benefit of this series comes in allowing an insight into the personalities of the drivers and significant team members. They are no longer the wealthy, mysterious, competitive athletes, previously kept at a distance from the general public.“

Bishop’s voice is notable because the coverage that surrounds F1 also tends to be male.  While the journalists may not be inherently misogynistic or dismissive of female fans that may also overlook their importance or presence.

In fact, Bishop notes that Toni Cowan-Brown, herself an F1 fan, has delineated how female followers of the sport are constructed as ‘sad, hysterical and sexual predators,’ only interested in the physical appearance of the drivers and the glamour of the sport.

To pivot to NASCAR is to show how the sport has failed its fans. When Liberty Media took over F1 in 2017, it took over stewardship from Bernie Ecclestone who had denounced social media, failed to see how streaming ventures could be important and acted in a generally misogynistic manner. Liberty saw the need to change how it was doing business and encouraged drivers to engage through various platforms, got rid of grid girls, and adopted more modern practices.

But NASCAR still has yet to really move forward. The advent of iRacing certainly helped but it seemed to become something of note more because of the pandemic rather than a marketing strategy by the sport.

And yes, while the fans are able to connect with drivers, there is so little that is worth mentioning. Rarely do any drivers throw shade or go after each other. Even Kyle Busch, who one might think would be most apt to explode on Twitter or Tiktok or wherever, has turned his platforms into comedy routines that largely poke fun at NASCAR officiating rather than anything else.

The sport has yet to give us glimpses of the things that would really add to the on-track drama and provide a connection with fans.  To watch Red Bull team principal Christian Horner trade barbs with Mercedes head Toto Wolff and to see the genuine friction between the two is beautiful theater.

Wouldn’t it be great to see NASCAR crew chiefs going after each other in much the same way, rather than being given the tame and listless NASCAR productions that follow the races? Wouldn’t it be fun to find out what drivers really think of each other? Who doesn’t want candid moments of the taciturn Chase Elliott ranting about someone?

The sport is missing out on this one. Rather than give fans their own DtS series, NASCAR and Netflix teamed up to give fans “The Crew,” a terrible sitcom starring Kevin James that got canceled after one season.

The series that will follow Bubba Wallace, announced in April 2021, will surely be highly curated and sanitized in a way that does nothing to give fans the meaningful connection that they want. With women comprising just under 40% of the NASCAR fanbase, there is room to grow. Chloe Targett-Adams, the Global Director for Commercial Relations for F1, has focused and worked to attract and keep female fans of the sport, 38% as of 2018.  But is NASCAR doing the same work for theirs?

I have been a NASCAR fan for over 50 years. I think the Dale Jr Download is a great show because it gives fans a chance to meet young and old NASCAR participants. I think if NBC or FOX did a weekly show that allowed fans to meet drivers, crews, families, etc. it would be a great way to draw in new fans. Just saying…

Notice what F! didn’t do. They didn’t change the points system, add a playoff, stages, or make up rules.

NASCAR needs to get back to it’s roots. Short (or at least shorter) tracks and tougher cars that can take some beatin and bangin. And throw out the WWE rules.

Also, take a look at the broadcasts. The F! announcers only get worked up when something big happens. They enjoy themselves and have some good laughs during the race. The producers seem to have JB and DE worked up the whole race.

Does anyone care for generating better racing?