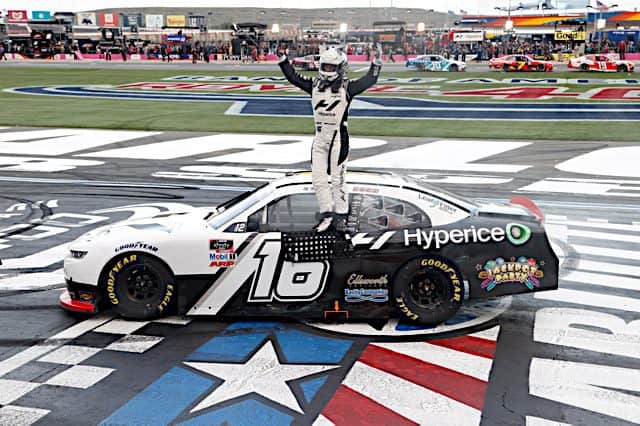 The No. 16 Kaulig Racing car just barely made it on fuel in overtime to win his fifth race of the year.

Allmendinger took over the lead from Ty Gibbs after the No. 54 missed the backstretch chicane around lap 48. He looked to be well on his way to his third-straight win at the Charlotte ROVAL but the caution came out for Tommy Joe Martins around lap 64, bunching the field back up once again.

However, Allmendinger held on to the lead in the final two laps, earning his sixth road course victory in the Xfinity Series.

“I knew it was coming out, it wasn’t going to go simple like that,” Allmendinger said after the race. “That was a fight today. We had to be kind of on defense early, worrying about the points. This place was tough to pass, the track was really to begin with, obviously with all the rain. Can’t thank all the men and women at Kaulig Racing enough, Matt Kaulig, Chris Rice. This HyperIce Chevy, once it got into the lead, was stupid fast.

“You all are what makes this so much fun,” Allmendinger added after the crowd cheered.

“I’m just proud of everybody at Kaulig Racing. The big picture’s the championship but getting another win, three here at the ROVAL, it means the world to me.”

Those missing out of the Round of 8 were Jeb Burton, Myatt Snider, Jeremy Clements and Riley Herbst.

The race began with a lot of action and fights for position, as Noah Gragson and others went three- and four-wide into the first turn. Shortly after the green flag, Martins and Will Rodgers spun and had some damage. Then the No. 31 of Sage Karam spun around right after a corner. Jade Buford tried to go around but got turned by another car and was stuck sideways, bringing out the caution.

Justin Allgaier had some trouble early on after battling with Cindric for the lead. He lost second place to Daniel Hemric and wheel-hopped going into a turn. He later reported possible brake issues after hitting the wall in the infield.

With Hemric in the lead, Cindric was told to do the opposite of what the No. 18 Joe Gibbs Racing Toyota did. Hemric opted to stay at the end of stage one so the No. 22 dipped down on to pit road before it closed. As a result, he was able to get back out front at the start of stage two.

Stage two appeared to be fairly quiet, but about halfway through the caution came out for Josh Bilicki who had hit a curb at the backstretch chicane. Bilicki had no brakes to turn in the chicane and went to the left, right into a curb. NASCAR had to cut the bolts off from the ground that were holding the curb down.

Save for another caution for debris, the rest of stage two went fairly calm until the closing laps. Hemric swept the stages, but further back Ty Gibbs made contact with Harrison Burton’s left rear coming out of the frontstretch chicane. Burton did all he could to not spin, sliding into the wall but beating Gibbs to the line. Burton ended up seventh in stage two.

After the restart to begin the final stage, Gibbs got out into the lead right away. However, he had some brake problems while out front. The No. 54 missed the backstretch chicane twice, allowing Allmendinger to take first place and others to pass him when he served his stop-and-go penalty.

Later on around lap 52, Gragson also missed the turn on the back portion of the track.

Allmendinger had a close call on the next lap as Joe Graf Jr. spun coming out of the frontstretch turn right in front of the No. 16 Kaulig car. Fortunately Allmendinger avoided Graf and the race stayed green.

Herbst had to retire from the race due to an axle issue, ending his playoff hopes.

Then, with about four laps left, the caution came out for Martins who had hit the wall. Martins had heavy damage to the right side of his No. 44 car.

Allmendinger led the final two laps after the restart while others fiercely battled for positions behind him.

Sam Mayer bumped Gibbs out of the way for second place while in the infield portion of the ROVAL. The No. 54 skidded but regained control and went straight on the course. However, Michael Annett had some troubles and was stopped on the backstretch. He eventually got it going again, and Allmendinger saw the white flag.

After Allmendinger took the checkered flag, other cars fought for positions and started running into each other on the frontstretch. Brandon Brown ended up crossing the line backwards.

It was smooth sailing for @AJDinger, but there was straight chaos behind him on the final lap. pic.twitter.com/M2R1iGD59R

However, it was Allmendinger who stood victorious. He and seven others — Cindric, Allgaier, Hemric, Haley, Jones, Gragson and Harrison Burton — all advanced to the Round of 8.

The Xfinity Series moves on to Texas Motor Speedway on Oct. 18. The Andy’s Frozen Custard 335 will air at 3 p.m. ET on NBC.