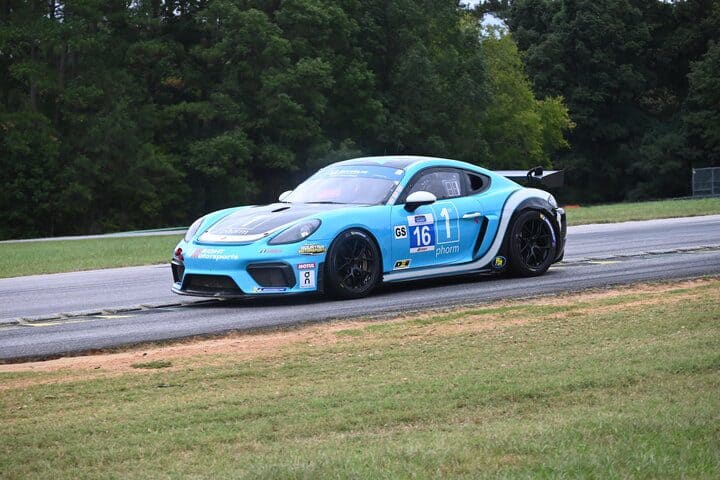 AFTON, Va. – IMSA Michelin Pilot Challenge teams only got one shot at practicing in the dry at VIRginia International Raceway.  Wright Motorsports’ Jan Heylen took advantage of that and set the quickest time of the weekend on Friday (Oct. 8).

Heylen clocked in a lap at 104.344 mph 24 minutes into Friday’s session to top the field.  The lap was nearly one-third of a second faster than Rebel Rock Racing’s Robin Liddell.  The Aston Martin of Archangel Motorsports’ Trent Hindman was third, then Turner Motorsport’s Bill Auberlen and Notlad Racing by RS1’s Patrick Gallagher.

Riley Motorsports’ Scott Andrews was sixth in the No. 21 Toyota GR Supra GT4, then Murillo Racing’s Eric Foss.  McCann Racing’s Andrew Davis was eighth in his Audi, then CB Motorsports’ Trenton Estep.  Robby Foley rounded out the top 10 in the second Turner BMW.  The top seven cars were within a second of Heylen’s pace.

TCR was led by JDC-Miller MotorSports’ Mikey Taylor with a lap at 101.039 mph, good for 19th overall.  Taylor’s lap was a quarter of a second faster than KMW Motorsports with TMR Engineering’s Tim Lewis Jr. in the sole Alfa Romeo in the field.  Bryan Herta Autosport’s Mark Wilkins was third in his Hyundai Elantra N TCR, then Tristan Herbert in the New German Performance Audi.  Michael Johnson Racing’s Stephen Simpson was fifth in the best of the Velosters.

The session was far from a clean one.  There were two red flags in the final 15 minutes.  The first came when Harry Gottsacker went off-course at turn 7 in his No. 33 Hyundai that was third quickest in the session.  That incident was cleared up, but almost immediately afterwards, VGMC Racing’s Karl Wittmer stalled his Honda Civic on the backstretch to bring out a second red flag.

Conditions were treacherous Saturday morning (Oct. 9) as the 34 assembled teams ventured onto the 3.27-mile road course for their second 60-minute session.  The track was fully wet at the beginning and teams struggled for grip.  Heylen was fastest early on, but nearly 30 seconds slower than he was on Friday.

There was one red flag during the session when CB Motorsports’ Mark Kvamme spun entering the Climbing Esses and hit the tire barrier.  Kvamme was ok, but his Mercedes-AMG GT4 suffered some front end damage.  Wittmer also spun his TCR-class Honda Civic Type-R TCR exiting turn 17 after dropping a wheel.  Wittmer didn’t hit anything, but made a mess of things in the process.

As the rain let up and more of the water was channeled off of the racing line, times improved significantly.  In the closing minutes of the session, Hindman turned in a lap at 87.703 mph to top the session.  The lap was still 22 seconds slower than Heylen’s best lap from Friday.

Hindman’s lap was eight-hundredths of a second faster than the Mercedes of Murillo Racing’s Kenny Murillo.  Motorsports In Action’s Sheena Monk was third in her McLaren, then Heylen and Estep in the CB Motorsports Mercedes before Kvamme crashed it.

Given the conditions, it’s not surprising to learn that a number of teams chose to skip the session.  Only 19 of the 34 teams entered set official times during the session.  Four of the 15 teams that didn’t set times did briefly go out to shake their cars down before returning to the pits.

Qualifying for the Virginia Is For Racing Lovers Grand Prix is scheduled for 8 a.m. Sunday morning.  Frontstretch will be on-site to recap the action.