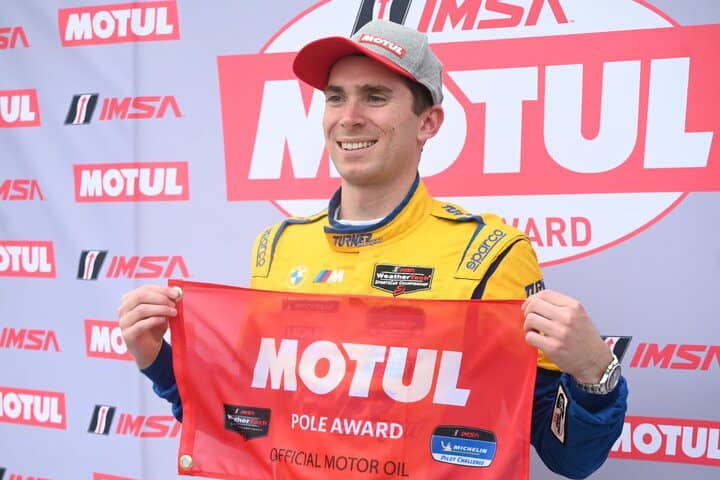 “With the rain last night, the track was super green and really greasy,” Machavern told Frontstretch after the session.  “I actually slid [off-course] coming onto the back straight and got some dirt on my tires.  We knew that based on the last session that we had to go for it since there was a red flag in the last session.  Looks like if we waited 10 more seconds, we wouldn’t have gotten our lap.  I was just barely headed down the front straightaway when they threw the red.”

The quick time for Machavern came just in time.  Right as Machavern was completing his lap, FCP Euro’s Nate Vincent lost control exiting turn 10 in his Mercedes.  The white and black Mercedes hit the tires, then rolled over the barrier before coming to rest on all four wheels.  Vincent was ok, but that ended the session early.

The sole Porsche in the field for Wright Motorsports’ Ryan Hardwick qualified sixth, followed by TeamTGM’s Hugh Plumb.  Riley Motorsports’ Milo Valverde starts eighth, while Tim Probert in the second Murillo Mercedes and Motorsports In Action’s Sheena Monk round out the top 10.

In TCR, it was a somewhat similar circumstance.  Bryan Herta Autosport’s Harry Gottsacker won the pole with a lap at 100.029 mph.  That lap was turned in 30 seconds before Gabby Chaves spun BHA’s other Hyundai Elantra N TCR into the tires at turn 5 to bring out a red flag that ended the session.  Chaves, like Vincent in the Grand Sport session, lost his best two laps for bringing out the red flag.

Gottsacker’s lap, which was good enough for 14th overall, was a quarter of a second faster than Copeland Motorsports’ Tyler Gonzalez.  Tristan Herbert will start a strong third in the New German Performance Audi, while Atlanta Speedwerks’ Brian Henderson was fourth.  VGMC Racing’s Victor Gonzalez Jr. rounds out the top five.