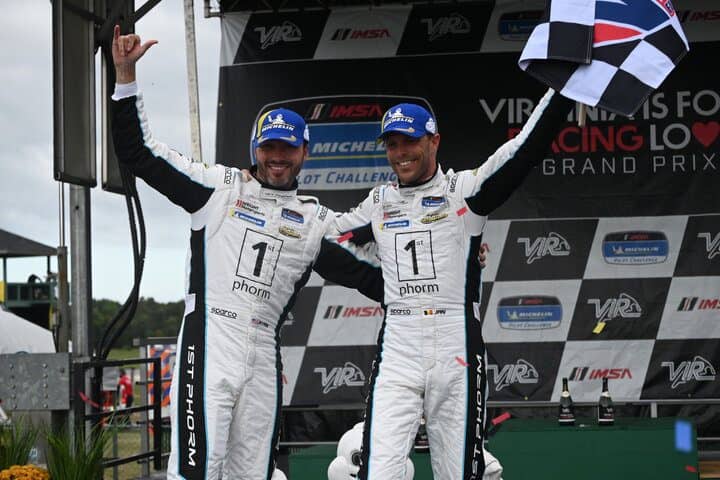 AFTON, Va. – Wright Motorsports’ Jan Heylen passed Notlad Racing by RS1’s Stevan McAleer at the end of the backstretch with 12 minutes to go Sunday (Oct. 10).  From there, Heylen held off McAleer and made his fuel hold out to take his and Ryan Hardwick‘s second win in a row in the Virginia Is For Racing Lovers Grand Prix at VIRginia International Raceway.

“At the start of the stint, I didn’t feel that we had the pace to run at the front,” Heylen said after the race.  “I went into a fuel-save mode and saved the tires.  Halfway through the stint, I could feel that we got stronger than the cars around us.  At the end, it was all about trying to set [McAleer] up”

Turner Motorsport’s Dillon Machavern started from the pole and led early in his BMW.  Kenny Murillo, driving in place of the injured Jeff Mosing, took advantage of his extra time in the car to give chase.  Behind them, Patrick Gallagher in the Notlad Racing by RS1 Aston Martin quickly moved up to third from fifth on the grid.  Alan Brynjolfsson in the Archangel Aston Martin joined the trio.  Together, they opened up a 10-second lead on the rest of the pack.

The leaders stayed in position until the 40-minute mark of the race.  At that point, McCann Racing’s Michael McCann Jr. slid off-course in turn 3 (NASCAR Bend) and hit the barriers.  Frontstretch was right on the scene when it happened.

Michael McCann Jr. has crashed the No. 8 Audi in turn 3. And I was right there when it happened. The right rear suspension is bent. pic.twitter.com/PrpHEHZNYs

In anticipation of the full course caution coming out, nearly everyone made their first pit stop of the day.  However, McCann placed his Audi in between the tire curtains between turns 3 and 4.  As a result, IMSA chose to leave the race green until the sequence more or less completed.

When the round of stops was completed, Bill Auberlen ended up in the lead in his Turner Motorsport BMW.  However, that was short-lived as McAleer got past and drop-kicked Auberlen back to third.

Motorsports In Action’s Spencer Pigot injected himself into the conversation as well, snatching the lead away from McAleer a couple a laps later.

VGMC Racing’s Karl Wittmer suffered a mechanical failure and stopped on-course with 33 minutes to go, bringing out the second and final caution of the race.  This forced teams to pick their pony in regards to pit strategy.

Pigot chose to pit his McLaren for fuel.  Murillo Racing’s Eric Foss stopped as well, but had a prolonged stop where the team worked on the left rear of the car, taking the No. 56 Mercedes out of the hunt.

McAleer stayed out and took the overall lead back with Heylen in second.  CarBahn Motorsports with Peregrine Racing’s Tyler McQuarrie quietly worked his way up to third, while Robin Liddell was fourth and Trent Hindman fifth.  This meant that these teams had to go the final 61 minutes on fuel, a stretch at best.

From the final restart to the finish, it was a seven-car race for the lead.  McAleer led while Heylen gave chase.  McQuarrie tried to get to the inside of Heylen a couple of times, but couldn’t get past.  Eventually, the Audi faded and eventually finished sixth.

Heylen pressured McAleer for multiple laps before finally getting past with 12 minutes to go.  McAleer pressured Heylen all he could for the final few laps, but could not keep Heylen and Hardwick off the top step of the podium

The margin of victory was just over a half-second over McAleer and Gallagher…or so it seemed.  In post-race inspection, the No. 23 Aston Martin failed the fuel capacity test.  As a result, they were disqualified.

Due to the disqualification, Hindman and Brynjolfsson were elevated to second.  Auberlen and Machavern were credited with third, followed by Rebel Rock Racing’s Liddell and Frank DePew.  CB Motorsports’ Trenton Estep and Mark Kvamme recovered from a practice crash Saturday to finish fifth.

In TCR, Bryan Herta Autosport’s Harry Gottsacker started from pole in his Hyundai Elantra N TCR, but his time at the front was very brief.  Copeland Motorsports’ Tyler Gonzalez took the lead away on the first lap, while New German Performance’s Tristan Herbert followed past.

New German Performance’s background, according to co-driver Britt Casey Jr., is in winged sprint car racing on dirt, a far cry from road racing.  Regardless, Herbert was able to drive the No. 44 Audi to the lead.

A split pit stop sequence resulted in Atlanta Speedwerks’ Brian Henderson going to the class lead in his Honda prior to the first yellow in the race.  By the time the pits opened for TCR cars, it was halfway.  Copeland Motorsports, who had already pitted once, was able to do a short-fill and get Tyler Maxson the lead back on pit road.

JDC-Miller MotorSports’ Mikey Taylor exited the pits in third and quickly got past Atlanta Speedwerks’ Ryan Eversley for second.  He then went after Maxson.  There was contact and Maxson was booted out of the way for the lead.  This resulted in a warning for excessive contact, but no penalty was assessed.

Eversley followed into second and looked to put the pressure on Taylor for the lead, but he went a little wide entering the Oak Tree turn and slid into the tires.  He would extricate himself from the barrier and continue, but Eversley and Henderson ended up seventh in class.

In the closing laps, Taylor had a slower Grand Sport entry between himself and Stephen Simpson‘s Hyundai.  That car, the No. 65 Murillo Racing entry driven by Brent Mosing, slipped past in the final 10 minutes, allowing Simpson to get up to Taylor.  However, Taylor was able to hold off Simpson to give himself and teammate Chris Miller their second win of the year.

The margin of victory was 2.467 seconds over Simpson and Michael Johnson.  Pole-sitters Gottsacker and Mark Wilkins ended up third, followed by Maxson and Gonzalez.  Bryan Herta Autosport’s Taylor Hagler and Michael Lewis came from 13th in class at the start to finish fifth.

Sunday’s race can be seen in condensed fashion on NBCSN.  The broadcast will air on Thursday, Oct. 14 at 3 p.m. ET.

Michelin Pilot Challenge teams have just one more race remaining on their schedule.  That is the FOX Factory 120 at Michelin Raceway Road Atlanta.  That race is scheduled to go green at 1:10 p.m. ET on Nov. 12.  The race will be streamed live on NBC Sports TrackPass.  Frontstretch will be on-site to provide you with all the action.