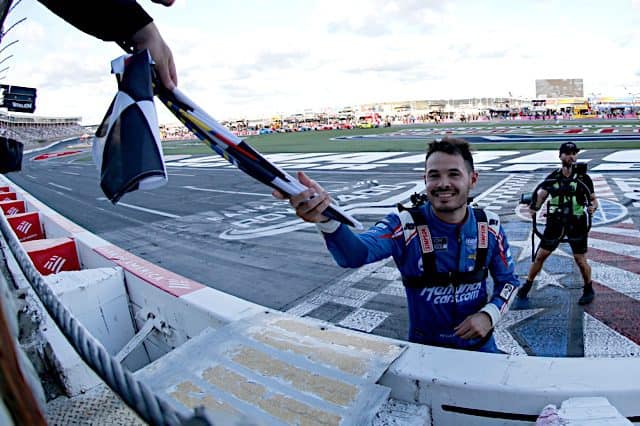 When the smoke and debris cleared, Kyle Larson emerged victorious after a hectic, chaotic race at the Charlotte Motor Speedway ROVAL, securing one of the Round of 8’s spots as four drivers were eliminated from playoff competition.

Kevin Harvick, Christopher Bell, Alex Bowman and William Byron ended up on the wrong side of the playoff cutline once the checkered flag flew.

“[…] I didn’t even real feel that good early,” Larson said after the race. “Started changing some things up there, doing a good job letting me know what to do inside the cockpit to get better. About that time I noticed my battery was going low, I was getting stressed out – man, I’m not going to get knocked out of the playoffs like that. It wasn’t looking too good.

“Thankfully everybody on our [No.] 5 car did a great job of staying calm,” he added. “[Crew chief] Cliff [Daniels], as always, did a great job communicating with me what was going on. Getting the battery changed, alternator, whatever it takes to get it changed to get our battery staying running. […] Just an awesome day for Hendrick Motorsports. Glad to get another win. Looking forward to the next round a lot.”

Once No Time to Die star Daniel Craig waved the green flag, polesitter Hamlin led the opening laps before Logano took advantage, leading at the competition caution. Misfortune started to befall playoff drivers almost immediately, with Bell suffering a speeding penalty on pit road and Brad Keselowski spinning around on the exit of the backstretch chicane.

AJ Allmendinger and Reddick started slicing their way through the field early, both in the top 15 after starting around 30th, while the first caution for incident flew for Ryan Newman. Newman’s No. 6 went around after contact with Keselowski, ending the day for Keselowski’s 2022 ride.

Even amid drivers missing chicanes and a Ryan Preece spin on the frontstretch, the battle for the stage 1 victory came down to Elliott and Allmendinger, with the No. 9 putting a move on the No. 16 to claim the green-and-white checkered flag. Recently eliminated playoff driver Michael McDowell even made an appearance, popping into the top 10 at the end of the stage.

Kyle Busch made his way into the lead at a track he’d never finished better than 30th at, winning the second stage while Joe Gibbs Racing teammate Christopher Bell did some off-roading in the infield section of the circuit.

Out front went Byron, who went on to lead a huge chunk of the third stage, but then, several races and 55 ROVAL  laps later, the tension between Harvick and Elliott from Bristol Motor Speedway boiled over.

The Nos. 4 and 9, respectively below and near the playoff cutline going into the Bank of America ROVAL 400, were racing near each other well into Stage 3 when Elliott went spinning.

He did so off the bumper of Harvick, suffering a significant amount of damage to the rear of the car and forcing the team to make extensive repairs to the No. 9.

Elliott cut down on Harvick within seconds of getting the car rolling, spinning the No. 4 as well, but Harvick ended up with considerably less damage. The back of Elliott’s car was splintered but he kept running, eventually having the entire rear bumper fly off. NASCAR held off on black-flagging the No. 9 and the bumper brought out the caution, setting up another restart.

Another caution flew for Corey LaJoie and Joey Hand smacking the turn 2 wall, followed by a chaotic restart with Hamlin scooting back out in front. Byron fell back after missing the backstretch chicane and, per the rules, needing to stop.

Reddick and Larson gave chase as the laps wound down, the trio still out front with 10 laps remaining. Larson moved into second, but got no further before another caution flew. This was for Harvick, who locked up the brakes heading into the first turn and destroyed his car against the barrier.

Harvick appeared to be mirror-driving with Elliott right behind him, the No. 9 having made clear he was going to exact revenge for the earlier incident.

Larson then took the lead on the following restart while Hamlin fell back into the clutches of the field, Reddick behind the No. 5 and Byron climbing back up to third. Byron was still trailing when he went off-track, ending any chances of him securing the win he needed to, while his Hendrick Motorsports teammate Larson cruised to the race victory, his seventh of 2021.

Larson, though, was on the outside of the playoffs looking in at times, with how the field swapped spots all over as the race unfolded.

“Yeah, I obviously had a pretty good idea [of the standings],” Larson said. “I’ve gone through it here a couple years ago, a few years ago in the [No.] 42. When you think you’re good, all of a sudden you’re running like 40th – ‘whoa, I’m down below the cutline.’

“I knew I was going to have some sketchy moments, just had to pick my way through traffic, stay calm,” he said. “We had some good restarts towards the end. Was able to use my tire advantage to get under Denny, squeeze him out of real estate off of four. Fun racing with Tyler. He’s one of the best there is under braking. I don’t like racing him because he’s so good […] Just a fun race. A lot of craziness all day long.”

The Round of 8 kicks off next weekend at Texas Motor Speedway, with the Autotrader EchoPark Automotive 500 set for 2 p.m. on Sunday, Oct 17 on NBC.