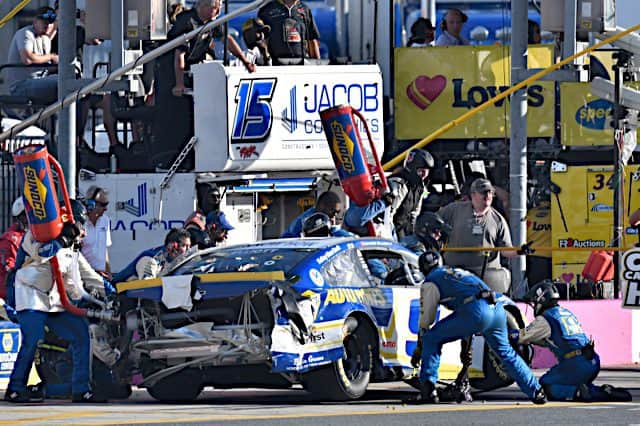 After a very obvious disagreement over their respective roles in the finish of the Bristol playoff race last month, neither Chase Elliott nor Kevin Harvick conceded that the spat was over.

After another go-round at the Charlotte Motor Speedway ROVAL on Sunday (Oct. 10), it might still not be.

Contact between the front bumper of Harvick’s Ford and the rear of Elliott’s Chevrolet sent the defending NASCAR Cup Series champion sideways and glancing off of the retaining wall. Elliott pitted for repairs and expressed his displeasure with Harvick over the radio.

The crew was able to tape the car back together but Elliott found himself mired in the back of the pack. The No. 9 sliced through the field while the rear bumper began to slip free of the tape that held it on. It finally blew off, bringing out a caution that actually ended up helping bring Elliott closer to the field and closer to Harvick.

When the race resumed, Elliott got within a few car lengths of Harvick as the field crossed the line. The No. 4 then overshot the first corner and plowed into the wall. The damage ended his day and his chances of winning the championship. When asked if the contact was payback, Harvick replied simply “You remember Bristol.”

By the time the race finished, Elliott was much more reserved about the feud, responding simply “As for Kevin, I just want to wish them a merry off season and a happy Christmas. Just happy to be moving on.” When told that it indeed was payback, he said “Oh. Congratulations, I guess.”

The tactics bothered more than just Elliott. Kyle Busch even weighed in on Harvick’s aggressive driving after the race. “The (No.) 4 was about running over everybody. He wasn’t making any friends out there today.”

Could the ROVAL become the new Bristol?

I believe that Nascar should have black flagged Elliott when his bumper was flapping in the breeze. Anyone else would have been. Just goes to show the favoritism they have always shown to Hendricks cars .it started with Gordon then Johnson and now chace and Larson. . Chace minipulsted the outcome of bristol and Nascar said nothing. Then Hendricks gave the orders.over the radio to wreck Harvick and nothing was done by Nascar about that.