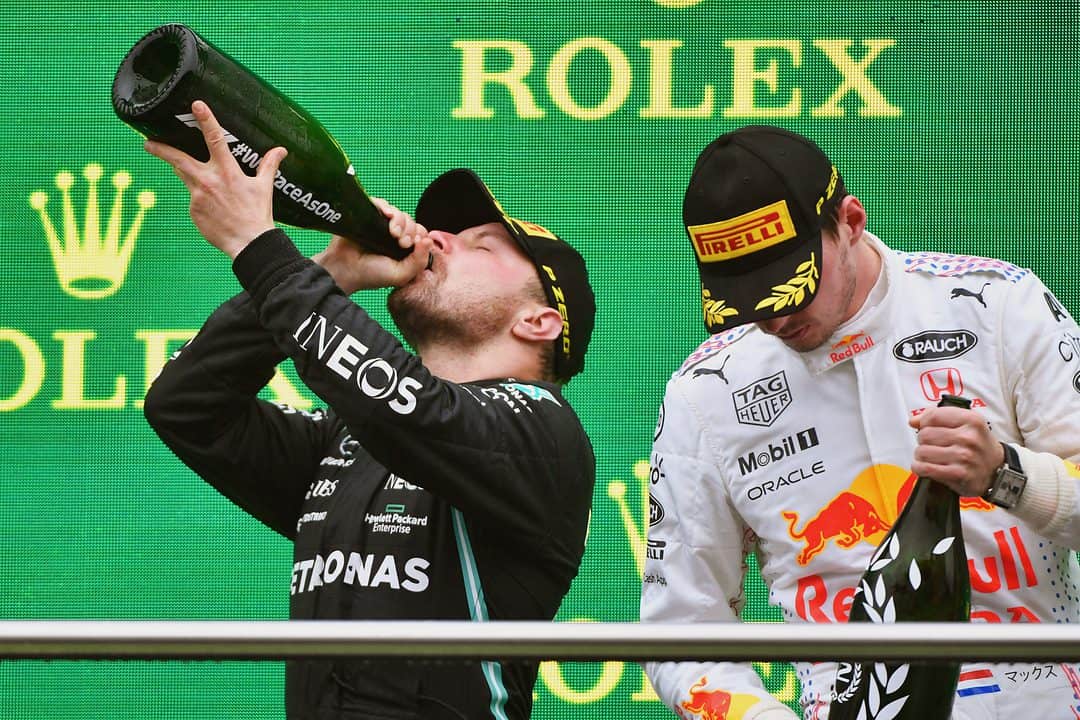 Just like last year’s race, the 2021 Turkish Grand Prix was very, very wet. With grip at a minimum and speed reduced, it meant that strategy and playing out the weather was every bit more important.

After having a season to forget, Valtteri Bottas finally was able to pickup his first Formula 1 win of 2021 and 10th win of his career. Passing Charles Leclerc on lap 47, the Finland native held off all who opposed to get Mercedes’ sixth win of the season.

The race fortunately saw no DNFs, with all 20 cars running at the finish.

By virtue of Hamilton taking a new ICU, Bottas inherited the pole for Sunday’s race. Getting away cleanly, Bottas jumped out to a two-second gap over Verstappen while the Red Bull driver struggled to get going.

In the back, Gasly spun Alonso, earning the Frenchman a five-second penalty. A few corners later, a recovered Alonso tagged Mick Schumacher, netting the Spaniard a penalty of his own. As the rain fell and Hamilton surged up the pack, the British pilot attempted to lap the Haas of Nikita Mazepin. In typical Mazepin fashion, he cut across the track holding up Lewis and eliminating Lewis’ chance to attempt a short pit of Perez.

Daniel Ricciardo pulled the pit road trigger first, with Verstappen following a few laps later on lap 37. The work done by Perez meant that Verstappen came out ahead of Hamilton, a crucial moment for the title fight.

As the race track maintained moisture, Sebastian Vettel put on slicks. This led to him immediately spin out and left him over 10 seconds off the pace. He pitted again and changed back to intermediates on the next lap.

Both Leclerc and Hamilton attempted to make one set of intermediates last the whole race. Unfortunately, Leclerc was chased down and passed by Bottas, a mirror of what happened in Silverstone. Hamilton pitted on lap 51 but overheated the tires after a few laps. As a result, Hamilton fell back and away from Perez and Leclerc, allowing Gasly to catch up.

In the end it was all Bottas, who picked up his first win in over a year after a disappointing final season so far with Mercedes.

“It’s been a while but it feels good,” Bottas said. “From my side, one of the best races I’ve had… everything was under control. Everything went smooth for once for me. When’s there’s only one dry line… difficult one.”

Verstappen took over the points lead by virtue of finishing second, however his second place in the wet felt a lot like a win for the Dutchman.

“It was not easy today, the track was greasy and we had to manage the tyres the whole race.” Verstappen said. “Valtteri had a bit more pace, but we are happy to finish second… it’s easy to get it wrong and drop back.”

Third-place finisher Perez had not sat on the podium since the French Grand Prix. His bad luck this season has been just as bad if not worse than Bottas’ has. However, the Mexican was delighted at RedBull’s second double podium of the year.

“It was quite an intense race, fighting with Lewis and Charles.” Perez said. “The start was very good, manage the tyres well, it was tricky to know where you were as the tyres went off and came back.”

The Formula 1 World Championship will head to Circuit of the Americas in Austin, Texas for the first United States Grand Prix since 2019. Hamilton is the defending winner. COTA will begin a three-race road trip in the Americas with USA, Mexico and Sao Paulo all within a few weeks of each other.

Verstappen will carry a six-point advantage over Hamilton.

Lights out for the United States Grand Prix will occur at 3 p.m. ET. It will air on ABC.