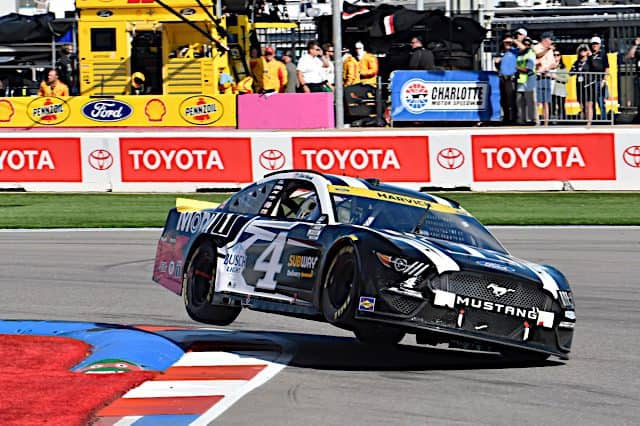 1. ROVAL win might have been the most impressive yet for Kyle Larson

If you picked Kyle Larson to win the Bank of America ROVAL 400 before the weekend, you weren’t exactly going out on much of a limb. Hendrick Motorsports’ brightest currently shining star (yes, sorry Chase Elliott) isn’t just having the best season of his NASCAR Cup Series career, he’s also proven quite adept at road course racing, claiming wins at Sonoma and Watkins Glen to go along with a runner-up result at Circuit of the Americas during the 2021 regular season. Before Sunday, he was one of the favorites.

Halfway through the race? Not so much. Larson was forced to make an unscheduled pit stop during stage 2 because of electrical issues in his No. 5 Chevrolet. That left him well off the lead, and even led some to wonder if he was in danger of just making it to the next round of the playoffs.

Shocking even to see this possibility, but Kyle Larson is currently below the playoff cut line in points as they run. That would be borderline unbelievable.

As it turned out, all the hand-wringing about Larson’s early exit after so much regular season success turned out to be for naught. Larson’s team was able to make all the right calls the rest of the way, and their driver aced all the restarts when it counted. Instead of finding himself on the outside of the Round of 8, Larson instead will lead the field with 65 bonus points.

Larson has literally led thousands of laps this season, so we’ve all become accustomed to seeing his Chevy out front. The ROVAL was different — Larson led just eight circuits, but once again, one of them was the final lap.

Not every victory can be a dominant one, and the sign of a champion in any sport is often being able to pull out a win on a day when everything isn’t going exactly right. This was a prime example for Larson and his crew, and arguably the biggest sign yet that he has what it takes to grab his first Cup Series championship.

It always feels like when with respect to on-track run-ins between drivers, half of NASCAR nation would prefer for “boys, have at it” to be the default mentality while the other half would just like the governing body to have set-in-stone ways to police any dust-ups. In truth, the reality is something like Supreme Court justice Potter Stewart’s famous “I know it when I see it” quote (which was about pornography, and actually dreamt up by his law clerk, but hey), with NASCAR stepping in when it believes someone has gone too far.

It might be at that point for Kevin Harvick and Chase Elliott. NASCAR Senior Vice President of Competition Scott Miller suggested Monday on SiriusXM NASCAR Radio that “we don’t need that continuing on and we’ll do what we think is necessary to kind of get that one calmed down.”

Interestingly, Miller also noted that the two competitors are tied at 1-1 in the grievance department, with Elliott accidentally on purpose holding up Harvick at Bristol and Harvick sending Elliott into the wall at the ROVAL. The problem now is that only one is still alive in the championship hunt (that’d be Elliott), so a continuation of the feud wouldn’t be on even turns.

That’s not even counting the impact they could have on other drivers still alive in the playoffs if, say, one wrecks the other and catches innocent cars in their wake. Like it or not, this is the exact situation that makes NASCAR feel the need to intervene — and it probably should.

If there was one constant in the discourse the past several years among the NASCAR community, it was dissatisfaction with the low horsepower, high downforce package used on intermediate tracks. Even though it’s way more complicated than just a horsepower number, just the thought of lower digits is enough to make some racing enthusiasts start breaking out in hives.

Those people aren’t likely to be thrilled by Bob Pockrass reporting that NASCAR has decided on its 2022 rules package, which features the same combo of reduced horsepower and large spoilers at intermediates, and a newer package with 670 hp for bigger tracks — down from 750 in 2021.

That’s a far cry from what some had hoped, which is that the coming of the Next Gen car would mean the end of this split. Instead, even the 1.5-mile and up venues will get slightly less power under the hood.

But before the inevitable freak out, it’s important to keep one thing in mind: Darn near everything will be different next year. If you remember the scientific method from your high school science classes, you’ll recall that the best way to determine the impact of a change is to tinker with only one variable at a time. Next Gen is effectively changing everything at once, so if the racing is subpar next year, it could be a package thing, but it might not. Only time will tell.

4. Ty Dillon gets his second chance

GMS Racing has had Cup Series ambitions for some time, so it was no huge surprise when the team announced it would field a full-time entry in the top NASCAR series in 2022. Its choice of driver, though, may have elicited at least a mild eyebrow raise in some corners, as GMS revealed on Oct. 10 that Ty Dillon would fill the seat of its No. 94 Chevrolet.

The younger Dillon brother is no stranger to driving for a one-car Cup Series outfit, seeing as he did exactly that for Germain Racing from 2017 to 2020. Dillon’s experience couldn’t have been a ton of fun, seeing as it led to zero wins, only a handful of top 10s, and no year-end finishes higher than 24th in the standings.

Yet it could certainly be argued that with GMS’ success in lower series, Dillon will have better resources behind him this time. The team will have an alliance with Richard Childress Racing, just as Germain once did, and ECR Engines. On top of that, the Next Gen car means everyone will be starting from scratch at the same time, though it would be silly to expect that the bigger teams won’t have a leg up.

In any case, it should be an intriguing under the radar story to watch how Dillon does with his second shot, as he’ll certainly be trying his best not to throw it away. And to all Hamilton fans, I sincerely apologize for that.

5. Metaverse and NFTs and blockchain, oh my!

Here’s a NASCAR deal you might not have read about this week: NASCAR signed a deal with a company called Subnation to create “an advanced digital ecosystem and branded storyworld for auto-racing fans.” What does that mean, exactly? It’s not immediately clear, as the rest of the press release is full of pseudo-technical marketing speak:

What I can tell you is that the metaverse is a hot topic right now in the tech space, with a number of smart, rich companies battling to define it. There are some cautionary signs here — both NFTs and blockchain technology have environmental concerns, for example — but it does show that NASCAR is thinking ahead.

If NASCAR can get it on the relative ground floor, creating an ongoing virtual space that delivers as much steak as sizzle, it would be a positive move for ensuring it has a presence in whatever the future of digital entertainment looks like. That’s a concept you might automatically associate with stock car racing, and it’s great to see.

Racing at the Cup level is a total team effort. It’s no surprise that a team like Hendrick would have top people throughout. Sunday’s effort is one that was won as much in the pits, as on the track. Everyone who had a hand in this should, & I’m sure does, feel very proud.

Ty says thank you grandpa, I don’t know how to flip burgers.

I’m not sure the most talented Dillon bother is the one at Rich Children Racing… gotta give Austin the nod on super-speedways, though.

Puzzling comment by Scott Miller if true. It wasn’t as if Chase was racing Harvick hard at Bristol because he wanted to pay tribute to Ryan Newman – he was paying him back for ending his chance to win (right or wrong), thus ensuring he also wouldn’t win. This has happened thousands of times in NASCAR history and that was the point at which they were 1-1 in the grievance dept. (with no lives put at risk, and all equipment in one piece). It’s as if Miller didn’t watch that race – which wouldn’t surprise me at all.

How about sponsor loyalty? How can you have a major sponsor for years (Jimmie Johns) and then switch (Subway)? As a consumer I’m confused with the whore like move. This is a perfect setup to be made fun of by KP.

This should help explain the change in sponsor…

Thanks DoninAjax, I missed that blogspot.