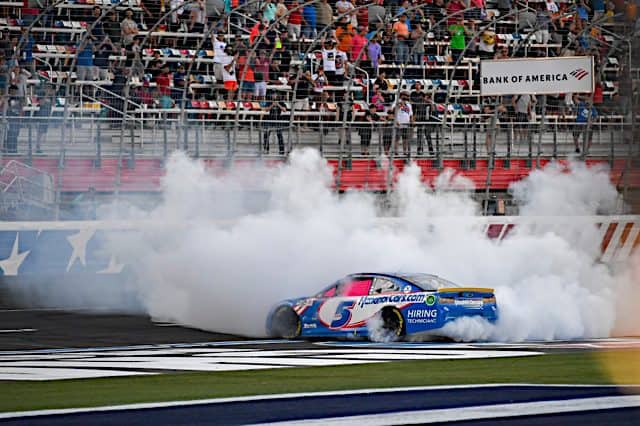 The memories of Kevin Harvick spinning in a last turn, last ditch effort to make the Championship 4 a year ago were vivid in the minds of Kyle Larson fans. The Hendrick Motorsports driver came into the Round of 12 looking like a lock to advance. That all changed last week at Talladega when Larson was involved in a crash that pushed him to a 37th-place showing.

Flash forward a week to the Charlotte ROVAL, and those fears of Larson being eliminated only grew. Just a couple of laps after HMS teammate Alex Bowman radioed that he was experiencing voltage issues, Larson experienced the same problem. The team was forced to change both the battery and alternator belt, yet they kept Larson on the lead lap. That’s all the phenom, dubbed “Yung Money,” needed to roar through the field and claim his series-leading seventh victory of the season.

Momentum is back on Larson’s side as he looks to make his first Championship 4 appearance, but it will be no cakewalk into the finale at Phoenix Raceway. Here are some notable statistics from the Bank of America ROVAL 400.

Entering the ROVAL, it had been 15 years since a driver swept the Charlotte races in the same season. This was the fourth edition of the ROVAL race, but no driver had managed to sweep the races on either the oval or infield layout. Kasey Kahne was the last to do so back in 2006, winning the first of his three Coca-Cola 600 victories and earning his series-leading sixth win later that year on the oval layout. Larson finally snapped the drought, ending up in the same place he did at the 600 in May: victory lane.

As dominant as Chase Elliott has been over the past couple of years on road courses, he too had never accomplished what Larson did at the ROVAL. Larson won his third road race of the year, becoming the first Cup driver ever to win three road course races in a single season. The win in Charlotte was added to his dominant victories at Sonoma Raceway and Watkins Glen International.

Larson became just the fourth driver from Hendrick Motorsports to win at least seven races in a season. Tim Richmond was the first to do so in 1986. Jeff Gordon achieved the mark five times, while Jimmie Johnson did it four times.

Harvick has won 30 races since he broke through for his first Cup title in 2014. Only Kyle Busch has as many, also scoring 30 wins since the 2014 finale. The difference? Harvick has not won another title since then, with five other drivers earning championships in that time frame. It won’t happen this year either, as Harvick crashed out at the ROVAL late in the race. It is the first time the Bakersfield, Cali. native has not advanced to the Round of 8.

Larson earned his seventh win of the season in his 32nd start for Hendrick Motorsports. In 219 starts for Chip Ganassi Racing, Larson earned six wins. His win also moves him into a tie for eighth with Geoff Bodine on the all-time wins list for HMS.

With his runner-up finish, Tyler Reddick earned his 15th top 10 of the season. The last driver to hit that mark for Richard Childress Racing was Ryan Newman in 2015, who recorded exactly 15 top 10s. It’s also the first time since 2017 a RCR driver has earned double-digit top 10 finishes.

The Round of 8 field has a lot of experience in this round. There are a combined 40 Round of 8 appearances between the eight remaining drivers. It is also the first time since the inaugural year of the current playoff format (2014) that none of the Round of 8 drivers are making their first appearance in the round. Joey Logano leads the way with seven Round of 8 appearances. Three drivers are making their sixth appearance (Kyle Busch, Martin Truex Jr., Denny Hamlin). Elliott is making his fifth straight appearance, while Brad Keselowski advanced for the fifth time as well. Ryan Blaney made his third arrival in the round, while Larson has the fewest with two.

Why the surprise about Kyle being good on road courses ! Didn’t y’all pay attention last year. The kid is a natural wheelman. Put him behind the wheel and he will figure it out. Reread what he said while following Harvick as the laps ran down at Bristol. He’s not only driving his car and developing a plan, he was also watching the mistakes Kevin was making in getting his tires too hot and that’s when he knew he could pass Kevin. He’s not just driving, he’s thinking and forming a plan. He might never be good at plate races but heck, that’s luck and a crapshoot. Right bubba.