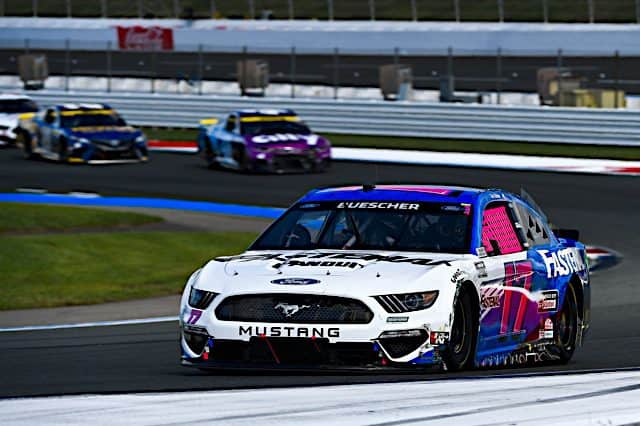 Is Kyle Larson the most talented driver in the NASCAR Cup Series? He has some stiff competition in that department, but the 2021 season has left little question that Larson is among today’s elite drivers. He learned to close races, and once he did, he showed he could win everywhere. The Bank of America ROVAL 400 was the third win on a road course – not known as a specialty for Larson – and the seventh win for the California native overall in 2021.

Larson more than doubled his career win total this year, after missing almost all of last year on a NASCAR-imposed suspension. It marks him as the title favorite, or at least a favorite, along with Denny Hamlin, who has been on fire during the playoffs. Maybe don’t carve his name on the trophy just yet, but make sure the engraver knows how to spell it.

After the race, Larson had high praise for runner-up Tyler Reddick, who he held off in the closing laps. “It was fun racing with Tyler. He’s one of the best there is. I don’t like racing him because he’s so good and so hard to race and pass,” Larson said.

And don’t forget: Chris Buescher. Buescher finished third behind Larson and Reddick, his best result of 2021 and second top five on a road course. Buescher has at times outrun expectations this year, and this week was one of those races where he turned some heads. Changes at Roush Fenway Racing for 2022 could bode well for Buescher, who has shown he has talent (he’s an Xfinity Series champion, don’t forget) but has never quite had the equipment to back it up.

While the NASCAR Cup Series has its share of haves and have-nots, the future is looking brighter for the top series as the new car looms. In addition to new teams with ownership obviously dedicated to succeeding, like 23XI Racing and Trackhouse Racing Team, both of which are expanding to add a second car in 2022. In addition, GMS Racing, which has been successful in lower series, particularly in the Camping World Truck Series, will join the top circuit next year as a one-car operation with Ty Dillon driving. GMS will have bonus technical help from Dillon’s grandfather to sweeten the deal and will be in it to be competitive, even if it’s not immediate.

In addition, Rick Ware Racing has made a technical deal with Stewart-Haas Racing and will also upgrade to Roush-Yates power next year, a move that shows the team isn’t satisfied with its status as a perennial backmarker. No, the alliance won’t work magic, but it should help the team pick up its results and establish itself on solid ground in the series. The more teams that can enter the sport and be competitive, at least within their own budget bracket, the better it is for the sport and its fans.

Polesitter Hamlin ran well at the ROVAL, but he struggled late, playing a bit of a pinball to Larson and others in the closing laps. He was shuffled from the front of the field to finish, but he has no reason to worry. Hamlin has wins at all of the next three tracks in the Round of 8 and that should help him as he tries to give Mark Martin back the distinction of being the winningest driver without a title in the modern era.

Defending race winner Chase Elliott survived a tangle with Kevin Harvick and a non-call by NASCAR (more on those later) to finish 12th. Not the finish he wanted, perhaps, but it was enough to move the defending Cup champion one round closer to a chance at going back to back.

Drivers entering the race below the cutline included Harvick, Christopher Bell, William Byron and Alex Bowman. And when it was all over, nothing changed. Harvick had several points to the good in the closing laps, only to cut a tire and hit the turn 1 wall and see it all evaporate with a 33rd-place finish. Bell overcame a pit road speeding penalty to finish a very respectable eighth, but it wasn’t enough to dig out of the playoff hole he’d been in.

Bowman and Byron both entered the race knowing they had to win to have any realistic chance to advance, and there were reasons not to count either out. Bowman’s record on the ROVAL is excellent and still is; his 10th-place finish is his fourth top 10 in four races on this layout. Byron made everyone take notice as he dominated a chunk of the day, leading 30 laps before a late crash took him out of contention to finish 11th, not a bad result by any stretch but enough to end any championship dreams.

Was it or wasn’t it intentional? Harvick didn’t leave much doubt, either on the track or after the race, saying simply, “You remember Bristol.” He has been nursing a beef with Elliott since late in last month’s Bristol Motor Speedway playoff race, when Elliott, a lapped car, blocked Harvick, the leader, long enough and hard enough for his teammate, Larson, to pass for the win after Elliott and Harvick had already tangled on track.

Harvick isn’t a driver to shy away from conflict, and he hadn’t bothered with Elliott at Las Vegas Motor Speedway or Talladega Superspeedway. But did it gain Harvick anything?

In terms of the playoffs in 2021, no. Harvick was eliminated after a late crash, but is there a long-term effect here, too? Elliott has been very aggressive on track this season, and not many others were willing to call him out lest they draw NASCAR’s ire for intentionally wrecking the series perennial fan-voted Most Popular Driver. If you know anything about Harvick, you know he probably doesn’t care if NASCAR penalizes him, especially since his title bid is over. It can also be argued that it was a matter of time before someone got frustrated with Elliott and raced him harder than strictly necessary in return for the same.

Fair game? At some point, it has to be. On-track payback is a dirty move. Doing it when the stakes are highest is dirtier. But so are the little aggressive moves that build up to those moments, and certainly, Elliott’s blocking at Bristol to ensure a Hendrick Motorsports win fits the bill.

At some point, drivers are going to say “enough.”

Tuesday is penalty day, but will Harvick see consequences for his actions? That’s not likely, because if NASCAR was going to take action, it’s much more likely the sanctioning body would have parked him immediately. If Matt Kenseth’s spinning Joey Logano at Martinsville is the most similar incident under the current playoff format, it’s possible NASCAR could suspend Harvick for a week, but not parking him as they did Kenseth makes it look like it won’t happen.

And really, it’s a different situation. Kenseth had heavy damage and was in the garage. He came back onto the track with the intent of wrecking Logano. Harvick, though, was racing for position at the time of the incident.

Also in all of this was NASCAR’s decision not to black flag Elliott when his bumper cover was hanging on by a thread and eventually fell off on the racing surface, bringing out a caution. That’s not the usual call in that situation. Elliott’s teammate Byron was black-flagged for the same thing earlier this year at Daytona, and while the consequences there would have been devastating, it’s still a discrepancy. The cover could have caused a larger incident when it came off, and that’s just not a good look.

It also made it look like NASCAR was playing favorites. It allowed Elliott the caution he needed when the cover let go, letting him catch up to the field. Would it have allowed another driver to continue with the cover dragging on the track? Will it allow it in the future? Where and for whom? It would be simpler and more transparent to simply lean toward the side of safety and require any car in that situation to pit to either fix it or cut it off. The call Sunday looked like favoritism to a lot of people watching the race, and that’s not a road NASCAR should go down, especially when they play with safety to do it.

On paper, it’s the same as it looked a week ago, but looking at the points now and thinking the Championship 4 are decided would be foolish. It could happen. Hamlin and Larson can certainly be expected to race for the title, though things can go wrong, but after that, it’s anybody’s game.

Of the eight, Brad Keselowski is probably on the shakiest ground. He’s in a lame duck situation at Team Penske and it’s likely that the organization’s focus has shifted to Logano and Ryan Blaney. Blaney’s currently fourth and racing for all the marbles at Phoenix is a good possibility. He’s been more consistent this season than in the past and he’s in the hunt just about everywhere lately. Logano has gotten by on consistency this year, but getting by won’t cut it now; he’s got to get hot. Martin Truex Jr. is currently third and is better at keeping a cool head than teammate Kyle Busch, currently fifth. The eighth driver in the picture is Elliott, who’s sixth after Charlotte, but he’s been a little unpredictable. He doesn’t look like a champion right now, and he’ll have to go through his own teammate to get there.

Amy your big 6 has become my number one column (when you write it) Monday mornings. You know exactly what you are talking about. Kudos!

Another reason things are (maybe) looking up is the number of relatively new drivers in the cup series. Custer and Bell are in their second year and both have won. It’s only a matter of time until Reddick and Chastian win. Next year will see Cindric and Haley move up to cup. The new drivers aren’t just coming in, they’re winning races. The learning curve has shortened, and with the new cars, it will even things up even more. And the newest sensation Ty Gibbs is right around the corner.

From a fan’s perspective, I’m really glad that NASCAR finally limited Xfinity runs by Cup drivers a few years ago. It has put greater emphasis on the up and coming drivers. I believe that the fan’s familiarity with these drivers when move up to the top level benefits both the the fans and the sport in general.

I must have missed something crucial. What I saw was Harvick overcook the corner, & take himself out when the 9 car showed up behind him. That looked like a textbook case of karma. I saw a heavy lockup, but no sign of a cut tire.

Wasn’t it Satchel Paige who said, :Don’t look behind you. Someone might be gaining on you?” And maybe want to spin you out?

If Elliott was blocking and holding up Harvick at Bristol, why didn’t he just simply knock him out of the way as he did yesterday. And if Harvick had the fastest car at Bristol, how did Larson pass him for the win? More fake drama.