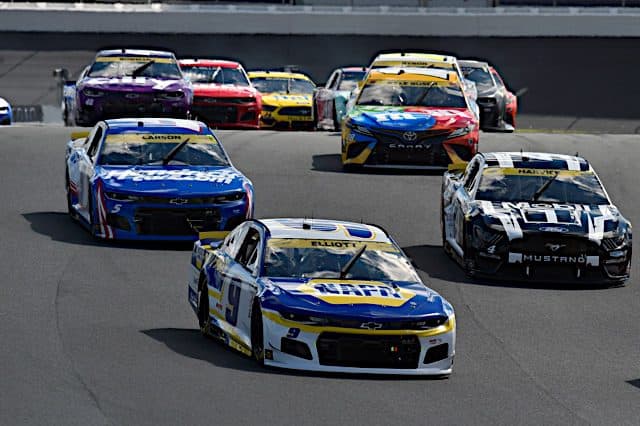 It is no surprise to see Charlotte Motor Speedway’s ROVAL dish out a healthy dose of chaos.  But for the 2021 playoff race, a day at the ROVAL came with more mind games than usual.  The feud between Chase Elliott and Kevin Harvick that began at Bristol Motor Speedway flared up once again, with Harvick getting revenge on Elliott.  Yet when the dust settled at the end of the race, Elliott avoided elimination and Harvick did not.  In fact, Harvick’s elimination came under some very curious circumstances.

The first salvo was on lap 55, halfway through the race, when Harvick made contact with Elliott at the exit of turn 7.  The No. 4 appeared to stay in the gas just a little bit longer than necessary, knocking the No. 9 off line and whipping the back of Elliott’s car into the wall.  Once he got on the oval section of the track, Elliott made additional contact with Cole Custer, spinning both cars around and bringing out the caution flag.  Elliott’s crew was able to make some quick repairs, but the loss of track position put Elliott squarely in a position to be eliminated.

However, the race was far from over, especially as far as the championship battle was concerned.  Although Harvick had a good chance at a top-10 finish after the incident with Elliott, he still needed to collect points to ensure his own advancement.  Plus, with Elliott still in the race, the No. 4 had a huge target on its back.  Elliott and his crew openly talked about going after Harvick for payback if they could catch him, and Harvick had to know that retaliation by the No. 9 was a possibility.

In the end, Elliott didn’t even have to touch Harvick.  With 11 laps to go, Elliott made a bold move through the frontstretch chicane to pick up a couple positions, putting him right behind Harvick as the pair raced toward turn 1.  Then, with the No. 9 looming in his rearview mirror, Harvick overshot the corner, slamming the No. 4 nose-first into the wall.  Too damaged to continue, Harvick was out of the race and had no chance to advance to the third round of the playoffs.  Elliott, battered car and all, fought to a 12th-place finish and kept his title hopes alive.

Not surprisingly, both drivers were coy in their post race interviews.

When asked if the lap 55 incident with Elliott was payback, Harvick said “Sometimes real life teaches you good lessons.”

And Elliott’s take on his day?

“Our team has a lot of fight and I’m just super proud of that.  As far as Kevin goes, I just want to wish them a merry offseason and a happy Christmas.

“(My) Opinions (about Harvick) are certainly not changing,” Elliott added, “but it’s all good, just glad to be moving on and proud of our team.”

The comments from both drivers are revealing for what they didn’t say directly.  Harvick was obviously not going to admit to wrecking Elliott on purpose.  No driver ever admits to that.  Furthermore, his explanation for why he crashed in turn 1 was technically sound, though he didn’t bring up the added factor of seeing Elliott in his rearview mirror.  Harvick certainly was not going to admit that Elliott psyched him out or forced him into a mistake.  Yet Harvick has been racing in the Cup Series for 21 years and has a championship and a mountain of trophies to his name.  It seems like an incredible coincidence for a driver of his caliber to make a costly error like that at the exact moment of Elliott’s first chance to take a shot back at him.

Ultimately, the mere threat of what Elliott might do forced Harvick into a mistake that had devastating implications for his championship hopes.  Perhaps the No. 4 team would not have been a title favorite if they advanced, but Harvick’s playoff track record speaks for itself.  Not only has he reached the championship race five times, but he had never failed to at least reach the Round of 8 in any year of the elimination-style playoffs, until Sunday.  In his determination to teach Elliott a lesson, Harvick made his own path forward more difficult.  Spinning the No. 9 might as well have been Harvick picking up a shovel to dig his own grave.

However, that is not to suggest that Harvick’s point was totally lost on Elliott.  If not for the No. 9 team’s quick repair job, as well as a caution flag caused by the damaged rear bumper panel flying off his car, Elliott never would have caught Harvick in the first place.  He certainly never would have picked up enough points to get back above the cut line.  Harvick’s payback for Bristol definitely made the No. 9 team sweat.

As Elliott rode around at the back of the field nursing his damaged Chevy, you have to wonder if he regretted holding up Harvick at Bristol.  That’s not saying that Elliott had to be happy about the contact with Harvick that knocked him out of contention for the win.  Yet it is worth asking if Elliott took his eyes off the prize by impeding Harvick’s progress and allowing Kyle Larson to take the victory.  Elliott had to have known that Harvick would seek retaliation, and Harvick made sure that he did it at a moment that inflicted serious damage on the No. 9 team’s title hopes.  Quite frankly, Elliott was lucky that NASCAR did not black flag him when his rear bumper panel worked itself loose.

In short, both Elliott and Harvick let themselves get distracted by playing mind games with the other.  Both of them made each other’s path to the championship harder, and both felt the stress of being a target for each other’s wrath.

Yet despite all the bad blood at the ROVAL, this is likely where the Harvick/Elliott feud ends for this season.  Since Elliott is still in the championship hunt, he has nothing more to gain by further antagonizing Harvick.  As much as he might want proper retaliation for the lap 55 incident, Elliott cannot afford to make himself a target in this championship battle again.  As for Harvick, wrecking Elliott again would be tantamount to an admission that Elliott forced him into an error.

So for now, the mind games end.  With Harvick eliminated from the playoffs and Elliott narrowly avoiding the same fate, perhaps real life taught more than one driver a good lesson on Sunday.

Karma threw that egg at Harvick and now he’s got it all over his face. Both drivers need to settle down, but until they do we get some added entertainment at no addition charge.

Reddick continues to impress me.

Agree about Karma. It was hilarious. Harvick was so worried about Elliott behind him that he screwed up and wrecked himself. You couldn’t script a better ending for poor sportsman Harvick.

Sally Baker
Reply to  Bill B

Maybe Elliott is the ‘new’ intimidator (small ‘i’)?

No maybes about this. Harvick is a Bonehead. Capital B.