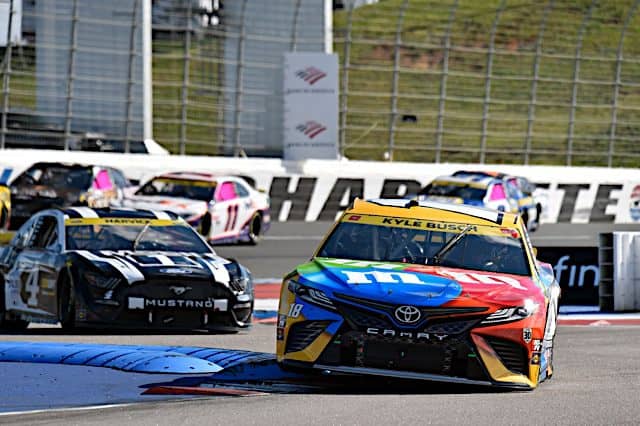 Joe Gibbs Racing crew chief Ben Beshore has been suspended one race and fined $20,000 after Kyle Busch‘s No. 18 Toyota had two loose lug nuts after the most recent NASCAR Cup Series race at the Charlotte Motor Speedway ROVAL, NASCAR announced Oct. 12 in its post-race penalty report.

Busch’s group was one of three Cup teams to be named in the report, along with one NASCAR Xfinity Series team.

Busch finished fourth at the ROVAL and advanced to the Round of 8.

For the Texas race, Busch will have his race engineer Seth Chavaka atop his pit box. Chavaka also served as the crew chief for Erik Jones last year in the second race at Darlington Raceway. Jones finished fifth in that race.

Crew chiefs Chris Gabehart and Scott Graves were both fined $10,000 after their respective cars had one loose lug nut. Gabehart is the crew chief for Denny Hamlin, who finished fifth and advanced to the Round of 8. Graves crew chiefs the No. 17 Ford, which Chris Buescher piloted to a third-place finish.

In the Xfinity Series, Kaulig Racing crew chief Alex Yontz was fined $10,000 for one loose lugnut on the No. 11. Justin Haley wheeled it to a fourth-place finish to advance to the Round of 8.

Wow! These penalties are such a deterrent that they will never happen again.

Fines of money will not deter these infractions. Deduct points!