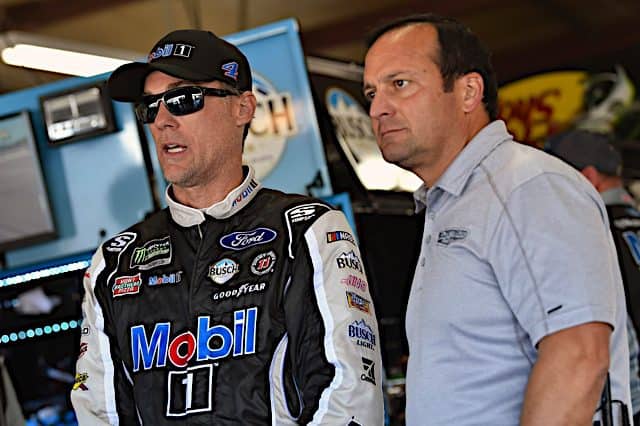 Did You Notice? … With four races left, there’s a handful of NASCAR drivers who won a race in 2020 that have yet to win in 2021? Just three are in the Cup Series, where a wave of parity and some upsets have produced 16 winners in the first 33 races, the most at this point in the year since 2013.

Let’s start with the big-name driver everyone knows about on this shortlist, a former NASCAR champion who went from a career-high nine wins in 2020 to zero.

Kevin Harvick (11 straight seasons with a Cup victory): Harvick’s year-long slump has been well documented, made worse by last weekend’s failed revenge on Chase Elliott. He’s now missed the Round of 8 for the first time since the current NASCAR format began in 2014.

Even in a down year, most drivers would kill for Harvick’s current average finish (11.3) but it’s actually his worst since his first year with Stewart-Haas Racing, also in 2014. Just eight top-five finishes are his lowest since 2012, back when he was driving for Richard Childress. It’s quite a fall for a 45-year-old who set a single-season record for victories by a driver age 44 or older one year ago.

Harvick is signed through 2023, while crew chief Rodney Childers recently announced a multi-year extension. It seems unlikely changes are coming, especially with SHR enduring their worst season since Tony Stewart bought into the program in 2009 (just one victory among four teams). So the bigger question is whether Harvick can sneak in a win before the season ends. We’ve seen this movie before, so it can happen: Kyle Busch broke a season-long winless streak at this weekend’s Texas Motor Speedway race one year ago.

Harvick has been strong at TMS in recent years, winning the fall race three straight seasons from 2017-19. He’s also got three career wins at the next track up on the schedule, Kansas Speedway.

But a runner-up finish to Joey Logano at Kansas last fall was the last time Harvick showed speed in the sport’s 550-horsepower package. A fifth place at Homestead-Miami Speedway back in March has been his best finish under that setup in 2021; he hasn’t led a single lap in any of the 550 races. That’ll leave him hard-pressed to earn a victory during this current round at Texas, Kansas or Martinsville Speedway, a 750-horsepower track where Harvick has just five career top-five finishes in 40 starts (and zero laps led the past five years).

That brings us to Phoenix Raceway, a place where Harvick has a track record nine Cup victories. His last one came in 2018 but he’s remained in contention virtually every race here, coming home seventh in the 2020 season finale and sixth in the spring.

Guess who was fifth in that race? Mr. Elliott. So there’s that. Considering those finishes, it won’t take much for Harvick to launch back into contention here, especially considering one of his strongest races the last six months was at New Hampshire Motor Speedway, a similar one-mile flat track.

It’s very possible Harvick enters Phoenix still seeking his first win of 2021 while Elliott will be fighting for a championship. One would think NASCAR officials would actually intervene before then …

By the way, the NASCAR champion has won the season finale every year under the sport’s current playoff format. The last time there was a breakthrough? 2013, where Denny Hamlin salvaged a difficult season with a win at Homestead-Miami Speedway.

Austin Dillon (1 straight season with a Cup victory): Dillon has had a year that’s deceiving. His average finish of 14.6 is actually a career best, better than RCR teammate Tyler Reddick who made the Cup playoffs over him. With 23 lead-lap finishes, he could conceivably pass his career high of 26, set back in 2016.

Unfortunately, Dillon fell victim to a year where a lot of mid-tier drivers pulled out a victory. Dillon only had a handful of opportunities, leading no more than seven laps in any race. A third-place finish in the Daytona 500 actually remains a season best; despite better consistency, he’s failed to crack the top five ever since.

Michigan International Speedway seemed to provide a last-ditch opportunity in August, where Dillon had a car capable of running up front before making contact with Brad Keselowski and wrecking out. That should provide a sliver of hope for the next two 550-horsepower races on the schedule: Dillon won a race at Texas last summer, using tire strategy to get to the front, and was 10th at Kansas back in the spring.

Is it likely? No. But not impossible. We’ve already seen surprise performances by non-playoff drivers, like Bubba Wallace’s Talladega Superspeedway upset and Ross Chastain’s third-place finish in the Southern 500.

Cole Custer (1 straight season with a Cup victory): Hey, remember Cole Custer? I swear he still drives in the Cup Series. It’s incredible to think that this time a year ago, Custer was a playoff driver after the upset of the 2020 season at Kentucky Speedway.

Custer may be the son of SHR President Joe Custer but he earned this Cup ride on merit. Let’s not forget, in 2019 he won seven times in the NASCAR Xfinity Series, finishing runner-up to Reddick in a Championship 4 that also included Christopher Bell. Custer then beat both of them out for 2020 NASCAR Cup Series Rookie of the Year.

But in 2021? Bell and Reddick left Custer in the dust. Both of them made the NASCAR playoffs, Bell won a Cup race at Daytona International Speedway’s road course while Reddick has come tantalizingly close, posting a runner-up finish just last week at the Charlotte Motor Speedway ROVAL. Custer? He hasn’t so much as sniffed the front. Or even the top five.

The best this sophomore has done is 10th, twice — at Talladega this spring and Dover International Speedway in May. Sitting 28th in the Cup standings, he’s ahead of just three full-time drivers: Corey LaJoie, Anthony Alfredo and Quin Houff. All of them have far less money and inferior equipment compared to the No. 41.

The tough thing for Custer is it’s not like he’s had a lot of bad luck: the team’s posted just three DNFs. His cars just simply haven’t had speed. And it’s been a noticeable difference between him and even the third-best driver on the SHR ladder: Chase Briscoe is some 94 points ahead and has been in contention to win a few road course events.

Look for major changes on the No. 41 team after the season. What I wouldn’t look for is a breakthrough victory to end this slump.

Zane Smith (1 straight season with a Camping World Truck Series victory): Why is Smith on the list? Last year’s two-time winner for GMS Racing is the most surprising driver from a lower NASCAR series (NASCAR Xfinity Series, Trucks) not to win again in 2021. More surprising than Harrison Burton and Brandon Jones, even.

Keep in mind there were rumors this summer Chip Ganassi was eyeing Smith for a full-time Cup ride before choosing to sell to Trackhouse Racing Team. Now? There’s no guarantee Smith will even have a full-time ride with GMS in 2022. He’s produced a grand total of one top-five finish in 20 Truck races this season, back at Nashville Superspeedway in June. He’s led just 66 laps this season while piling up two DNFs during the playoffs; sitting eighth heading to Martinsville Speedway, he’ll almost certainly need a win to advance.

Last year’s young phenom is this year’s passing fad. Indeed, Smith was passed over for the GMS Cup ride in favor of Ty Dillon. He’s far from the best driver on the Truck team; that goes to reigning champ Sheldon Creed. A win would go a long way these next two races in reminding people of the potential that had the 22-year-old on the fast track to Cup.

It’s no earth-shattering revelation that the champion has won the last race on the schedule going back to 2014. If you have watched any of those races for 5 minutes, you see 35 extras on the set staying out of the way of the 4 “stars”.

And with the current “qualifying” formula at they get to start in the first four positions and don’t have to pass any of the great unwashed who qualified faster.

Time for qualifying and not cellphone adds.

Funny how that happens. Miami 2014 with Gordon dominating the race and leading with 20 laps to go, Caution Flag, Gordon who is not in the final 4 stays out and most of the field pits for tires. Wonder why with nothing top lose, why would you not pit for tires?

Or a few years later when Larson clearly had the best car in the field, was rolling toward the front with about 20 laps to go and just settled in 3rd place.