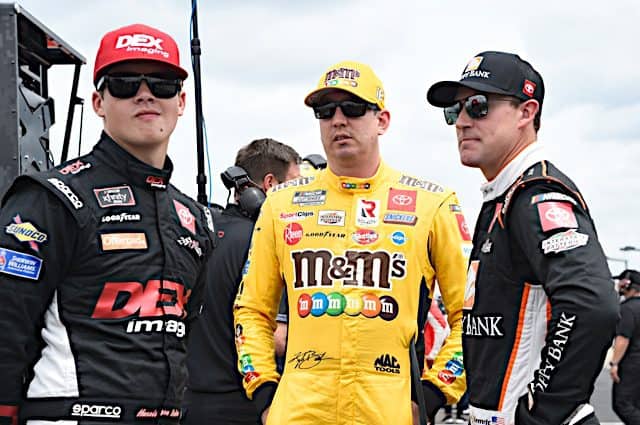 What was the takeaway from the Next Gen NASCAR Cup Series car testing this week?

One big takeaway from the past week of NASCAR Cup Series news is that the days of the small stroker teams may well be coming to a close.

Sure, there will always be big teams and small teams, and the big teams will always have the upper hand. But over this past week, it was announced that Rick Ware Racing, the poster team for fielding cars that get lapped every 20 minutes in green flag conditions, has entered into a technical alliance with Stewart-Haas Racing and will be receiving engines from Roush Yates next year.

Earlier this week, joining the established race teams in the highly publicized Next Gen testing, was Team Hezeberg, a new part-time Cup operation that was announced just that weekend. Despite few knowing the team existed just a few days prior, it was still able to post pretty OK lap times compared to the rest of the cars on track. The Ware car was also fairly competitive, after running seconds off the pace every single lap just that Sunday in the Cup race.

The biggest reason why these smaller teams are being competitive is just how many common parts of the car all teams are using. All cars next season in Cup will use the same chassis, the same gearbox, the same parts and pieces. All engines will be able to produce the exact same amount of horsepower. The only big differences will be the setup that crew chiefs bring to the track, just how efficient that engine will be at producing that horsepower, and the actual bodies on the cars.

Again, the big teams will still end the day holding the trophy. But the times are changing, and it’s unlikely after the championship race at Phoenix Raceway next month that there’s ever a situation where a team is routinely running multiple laps down with no mechanical woes or crash damage.

What’s next for Elliott and Harvick?

This week, NASCAR had a sit-down with Chase Elliott and Kevin Harvick.

The ongoing rivalry between the two has been a big talking point this week. NASCAR does not want it to continue past this point and allow this rivalry to go further out of hand at this point. Just ignore the tweet below this paragraph.

Was today the last we've seen of this rivalry in 2021? pic.twitter.com/9DNigqP4zu

In all seriousness, it was the right thing to make this meeting. Harvick was kind of egged on to do something after looking like a clown on national television, but NASCAR and its partners also clearly does not want this to turn into another Joey Logano-Matt Kenseth situation. Again, please ignore the tweet below this paragraph.

"KENSETH TAKES HIM OUT!"

Five years ago, Matt Kenseth retaliated against Joey Logano at Martinsville in the #NASCARPlayoffs. pic.twitter.com/WvQjjvxndr

While it may have been the right move, clearly the ball is in Harvick’s court here. NASCAR is not going to punish him further than a suspended race or two if he does knock Elliott out of the playoffs. I don’t think he will, but say he does. Is that really going to matter in the long term, outside of NBC making a tweet about it five years from the incident?

Could NASCAR have threatened a death penalty, meaning a suspension could move on to next year? Maybe. But quite frankly, NASCAR wouldn’t have the guts to do that to Harvick or really any other big name driver in practice. Everybody would lose revenue in that situation. The emperor just does not have any clothes in this situation.

Who will get the nod to drive for Joe Gibbs Racing in the NASCAR Xfinity Series next year?

John Hunter Nemechek will return to Kyle Busch Motorsports in the Camping World Truck series next year, it was announced Oct. 14.

The 24-year-old driver has enjoyed a resurgent season with KBM after a largely disappointing one-year stint with Front Row Motorsports in the Cup Series. It’s hard to imagine Nemechek, who already has so much experience for somebody so young, will stay in Trucks forever, but he may well get shoehorned into that role if he doesn’t move back up in 2023.

JGR still has a couple seats to fill next season in the NASCAR Xfinity Series, with it being expected that both Brandon Jones and Ty Gibbs will race full time next year for the outfit. One of those seats will probably remain the All-Star car, even with Kyle Busch  supposedly retiring from the series and Gibbs being promoted. With the return of qualifying, going back to a part-time car is actually doable if it can’t fill the slot up for some races.

With Nemechek committed to KBM, there are still a number of options for that final JGR seat. If the sponsorship money works, the best driver for that spot there is Ben Rhodes. He already has a relationship with Toyota from this year and has had a very successful season so far in the Truck Series.

Who can survive Texas Motor Speedway?

Texas Motor Speedway seems much more exciting this go around, and I just can’t put my finger on what changed. Social media seems so less cringe this year compared to just about every race at this track previous for some inexplicable reason.

Fort Worth’s 500-mile Cup race is a very long endurance event, even if it is not thankfully held a few months prior to its current date in the fall. The driver to watch out for at a race like this is Martin Truex Jr., who always seems to have an advantage the longer a race goes on.

His JGR teammate Kyle Busch returns to the track that was home to one of his few bright spots in the 2020 campaign. The ending to last year’s race cane at the end of a 118-lap, 177-mile green-flag run — the longest to close out a race all of last season. With non-playoff drivers largely driving with an egg on the throttle around playoff drivers, this may well end in a similar fashion as last year’s race.

More parity will probably be a good thing.

Rhodes is a good pick for the other JGR NXS ride, but I’d guess Austin Hill might be an option, too – he’s another Toyota guy, and takes care of his stuff. He also doesn’t seem to make other drivers as angry as Rhodes or Sauter.

Be nice to put Matt D in the mix as well. He seems to make every car he drives better. Wouldn’t be surprised if JHN makes several appearances in the #54.