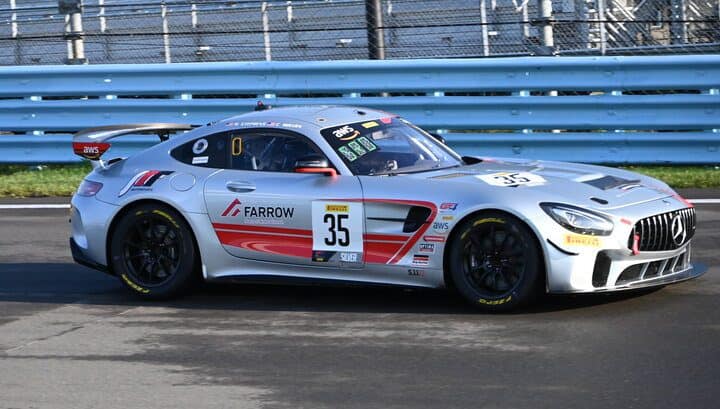 Conquest Racing’s Colin Mullan ran down Fast Track Racing’s Toby Grahovec in the closing laps Thursday (Oct. 14) and made the pass with 11 minutes to go in turn 10.  From there, he drove away to give himself and teammate Michai Stephens their third straight overall victory.

Fast Track Racing’s Stevan McAleer, coming off of a tough day Sunday at VIR that saw him spin out of a chance to win the IMSA Prototype Challenge, then get sent to the rear of the Grand Sport class after failing post-race inspection in Michelin Pilot Challenge, start from the pole.  The race got off to a tough start.

Once the race truly got underway, McAleer ran off and hid from the field.  BimmerWorld Racing’s James Clay was able to move up to second on the first lap after CCR Racing/Team TFB’s Tim Barber made a dive on Stephens in turn 8 and took both cars wide.  After the restart, Clay settled into a three-way with Stephens and Murillo Racing’s Kenny Murillo for second.

The battle allowed McAleer to stretch his lead to 14 seconds by the time the mid-race pit window opened.  During the round of stops, Stephens was able to get past Clay.  The Conquest team was able to get Mullan out in front of Murillo Racing’s Christian Szymczak to consolidate second-place overall.

Grahovec exited the pits with a lead of more than 12 seconds over Mullan.  At the time, Silver Cup teams had the first four places overall.  Grahovec was unable to hold onto his advantage.  It appeared that McAleer may have run too hard early and burned up his tires.  Since tire changes are not allowed in Pirelli GT4 America SprintX unless you cut a tire, conservation is key.

Mullan was able to run Grahovec down at a rate of a second a lap after the stops.  At that pace, it did not take long for the gap to disappear.  It was a mere 12 minutes before Mullan was right on Grahovec’s tail.  A battle broke out as Grahovec did his best to hold off the charge.  However, Mullan was simply too strong.

Once in the lead, Mullan was able to hold onto his pace and drive away from the field.  Szymczak was also able to get past Grahovec for second, but was unable to keep pace with the silver and red Mercedes.

Mullan and Stephens’ margin of victory was 3.775 seconds over Murillo and Szymczak.  McAleer and Grahovec ended up third, 14 seconds back.  BimmerWorld Racing’s Chandler Hull and Jon Miller were fourth in Silver, then Barber and Cole Ciraulo.

In Pro-Am, NOLAsport’s Matt Travis qualified 10th and moved up quickly.  BimmerWorld Racing’s James Walker led early in his BMW, but Travis was able to take the class lead immediately after the restart.  Travis was the first driver to pit once the pit window opened 25 minutes into the race.

Once Jason Hart was in the car, Hart was able to move himself into the top five overall.  Once there, he comfortably drove to the team’s eighth class win of the year.

Hart and Travis’ margin of victory was 3.293 seconds over BSport Racing’s Bryan Putt and Kenton Koch.  Koch made a nice pass on the WR Racing Aston Martin shared by Valentin Hasse-Clot and Paul Terry on the final lap to take the spot away.  Stephen Cameron Racing’s Tom Dyer and Sean Quinlan were fourth in their BMW, while BimmerWorld Racing’s Walker and Bill Auberlen were fifth.

The Am class was dominated by the champions-elect from Smooge Racing.  Kevin Conway qualified the team’s Toyota GR Supra GT4 eighth overall and held that position throughout the first half of the race.  However, once John Geesbreght got in the car, the team began to drop back through the field as Pro-Am entries began to advance.  Despite this, Geesbreght was never under threat and took the Am victory in 16th overall.  It is the team’s eighth class win in 13 races.

Conway and Geesbreght’s margin of victory was a full lap over Automatic Racing’s Paul Kielber and Mikel Miller.  Zelus Motorsport’s Jason Harward and Tigh Isaac was third, then Forbush Performance’s Matt Forbush and Damon Surzyshyn.  The Racer’s Group’s Dr. James Rappaport and Todd Hetherington were fifth in their Porsche.

The final race of the Pirelli GT4 America SprintX season is scheduled for Friday at 2:35 p.m. ET.  The race will be streamed at GT4-America.com starting at 2:25 p.m.