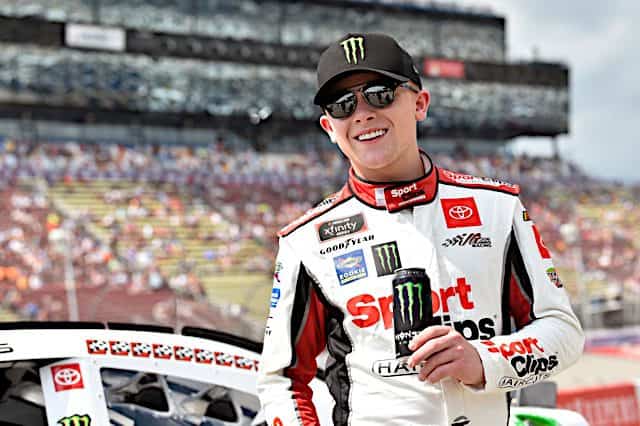 Rivalries. They’re what puts the ‘fan’ in fanatic.

Two drivers who absolutely check the box of NASCAR’s next great rivalry? None other than Ty Gibbs and Sam Mayer, a pair of drivers who have followed a very similar career path over the past five or six years.

Rivalries are fierce for the NASCAR fan base. If you’re a Chase Elliott fan, you probably are avoiding Subway and Busch Beer for a long time. The same goes for your home improvement needs in the 1990s and 2000s if Tony Stewart was among your greatly disliked drivers. Rivalries ramp the energy up in racing, and that has not been limited to the top series in NASCAR. In the Xfinity Series, of the most heated rivalries was that of Randy Lajoie and Buckshot Jones.

If you followed the series then, it was hard to be an in-between when it came to these two. You were either a fan of the hard-nosed racer carrying on like his family had done before him, or you loved the brash mentality of the No. 00 car driven by a guy with an unforgettable name like Buckshot. The souvenir sales at Buckshot’s trailer after the pair’s famous dustup at Bristol remains the stuff of racing merchandise legend.

With these two drivers, as is the case in many other rivalries, fans have their minds made up about what side that they’re on, and there’s no changing that opinion. Jimmy Spencer may never forget, but neither do fans of a driver who years ago vaguely recall their favorite being what they appear to be wronged on the racetrack.

Back to Gibbs and Mayer. If you follow the ARCA Menards Series, you’re familiar with both drivers’ ability to win races. In fact, they combined to win 11 ARCA events last year, but it was deeper than that. On two occasions, they finished 1-2, with other occasions being marked by both finishing in the top five.

Both can win races and have proven equipment to do so with. If you’re a young driver moving up, there are few better places to be than JR Motorsports and Joe Gibbs Racing, two outfits that have time and again proven that they can win races with multiple drivers. It’s a driver’s best friend, a situation where they’re free of having to worry about how a family-funded team will make it to the next race or having to wear the hat of driver/marketing director/owner.

A lot goes into a rivalry. First of all, both drivers have to be able to run well against one another. Another key component is a following having been built up over time. The third ingredient is probably the most important and includes past run-ins with one another.

With the 2021 season coming to an end, there’s a strong urge to look toward next year, especially for drivers who are out of the playoff picture. These drivers have not exactly had a bad season, but due to running a part-time schedule, cannot compete for a championship, although their part-time performance shows that they’d have been able to if given a full-time chance.

In short, Mayer and Gibbs have to both worry about just one thing: racing. And with both eager to take the next step, it’s showing on the track.

Gibbs’ record this year speaks for itself with three wins, including on the Daytona International Speedway road course in his very first Xfinity race. Through no fault of his own, Gibbs has drawn some dislike, another element of a rivalry. Sometimes, people just need someone to hate and the driver going against them gets a weight of support behind them, further fueling the embers of rivalry.

To a degree, Gibbs draws a dislike for two reasons. He’s won a lot of races in a short time and he just so happens to be in this opportunity due to being the grandson of legendary NFL coach and NASCAR team owner Joe Gibbs. It’s as absurd as ire against Austin and Ty Dillon due to their granddad being Richard Childress while acting as if no driver ever before has gotten a ride due to fortunate circumstances.

On the other side of this blooming rivalry? Mayer.

If you want a young and upcoming driver to keep an eye on, Mayer is it. At the ripe age of 18 years old, Mayer moved into the No. 8 Chevrolet for his part of the season with JR Motorsports in late June, and after some early bumps, everything appeared to click last weekend at the Charlotte Motor Speedway ROVAL, where he was a consistent top-five car before finishing 10th. Racing him for a position in the closing laps? Gibbs.

That eventually resulted in contact sending Gibbs for a slide and amazing save.

I went for it. I knew I had to beat the 22 into the corner since he had better exits all day on me. For us, it was win or go home we had nothing to lose! Momentum building! #keepitgoing

The good news for NASCAR? Both Gibbs and Mayer have a high amount of driving ability and have great race teams around them. The better news? NASCAR’s next great rivalry is only beginning.

The new blood in both the Xfinity and Cup series has been welcome. Used to be that drivers moving up had to work their way up from a small team to a top tier ride. Now, promising Xfinity drivers move into premier rides and they win within a year or two. The new cars next year will help to shorten the experience gap a bit. We’re in the midst of a changing of the guard.