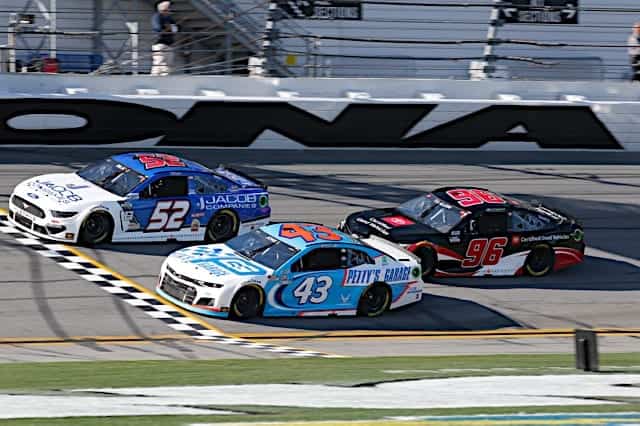 Is Rick Ware Racing, or, ahem, Petty Ware Racing, about to lose a charter in the NASCAR Cup Series, or has the team already made plans to sell it?

One of the big pieces of the past two Silly Season puzzles has been the game of charter musical chairs. Since 2016, there have been 36 chartered Cup teams, meaning they’re guaranteed a starting spot in every race and they get the large share of the purse.

To be a non-chartered race team means you’re not going to break even unless you’ve got a huge sponsor paying your way. NASCAR doesn’t release the purse figures anymore, but it is believed that Kaulig Racing, a non-chartered team, was only awarded $1,000 in purse money for AJ Allmendinger‘s win at the Indianapolis Motor Speedway road course earlier this year. There’s a reason JTG Daugherty Racing‘s No. 37 team will close down after running without a charter this entire season.

With new teams 23XI Racing, Trackhouse Racing Team and Kaulig coming onto the scene in the past year, the price of a charter has skyrocketed. At one point it was rumored the going rate for charters was over $10 million, a rate that prevented JR Motorsports from exploring a move to Cup.

Just three years earlier, the rate of one of the top charters in NASCAR, Furniture Row Racing’s No. 78, sold to Spire Motorsports for $6 million. So any charter of a lower-tier team that sold during that span would’ve likely sold for much less.

Rick Ware started out with zero charters when the system first came into play. His team now has four, picking up three along the way as BK Racing, Premium Motorsports and Tristar Motorsports went out of business.

The fourth comes from a partnership with Richard Petty Motorsports in what was formerly its No. 44 car. That fourth charter is now the No. 51 car primarily driven by Cody Ware, Rick’s son, listed in the owner standings as belonging to Petty Ware Racing.

I wonder if Richard Petty even knows that such an entity exists. Basically RPM owns the charter, and RWR operates it. It’s weird.

Give Ware credit where credit is due. He outlasted a lot of other teams and has even found a way to thrive in this system. If he decided to sell all charters and just walk away from NASCAR altogether, he would gross a ton of money compared to what he paid for those charters. He’d probably make enough to go live on a private island.

But where Ware has drawn frequent criticism is over the quality of those four cars he fields each week. You see those cars that tend to get lapped early and often each Sunday? Most of those come out of the RWR stable.

Five drivers have driven 12 or more races for the team this year, with Cody Ware posting the team’s best average finish, 31st.

Fortunately for the team, there is promise for the future. The team announced on Oct. 10 it is forming a partnership with Stewart-Haas Racing and Ford Performance. As a result, the team will now use Roush Yates Engines as the engine supplier. Combine that with every team having the same parts suppliers for the Next Gen car next season, and RWR should have its most competitive cars yet.

According to NBC Sports, Ware “will have two cars and is looking at a third car next season.”

“I’m not prepared to run four cars at this time,” Ware said.

That means at least one, maybe two, of the cars RWR currently operates will not be on the track next season. So what is Ware going to do with these one or two charters?

The assumption would be that he would give the No. 51 back to Petty for them to then use, lease or sell. RPM could certainly use the money from leasing or selling a charter.

The No. 43 of Erik Jones has had primary sponsorship from Petty’s Garage or Medallion Bank in 16 of the 32 races so far this season and will have Medallion on the car again this weekend at Texas Motor Speedway. Those are two companies owned by either of the RPM co-owners Petty and Andrew Murstein, so that essentially tells me the car didn’t have sponsorship for those races.

Ware could also lease or sell a charter to either 23XI or GMS Racing, who are looking for charters for Kurt Busch‘s No. 45 and Ty Dillon‘s No. 94, respectively. It was believed 23XI would get that charter from Front Row Motorsports, but FOX Sports’ Bob Pockrass reported that FRM walked away from the deal. Still, Pockrass indicated 23XI would talk to Spire before RWR about acquiring a charter.

Does Ware already have a buyer or leaser lined up? Maybe, but it certainly doesn’t seem that way. However, the team could wind up giving away the charter in a much less pleasant fashion.

When the charter system was introduced, there was a failsafe built into it to prevent teams with charters from putting in bare-minimum effort for very long. Should a chartered car finish among the bottom three chartered cars in owner points three years in a row, NASCAR will supposedly take the charter from that team.

The "Other" Points Battles: After Charlotte Roval from NASCAR

The two cars directly below the No. 51? Well, they are RWR’s Nos. 53 and 15. So one would think RWR would try to manage races so that the No. 51 maintained the lead on those two cars and finished ahead of them in points. It is not uncommon to see team cars helping each other in points situations.

However, RWR went and did the exact opposite of that this past weekend at the Charlotte Motor Speedway ROVAL. Cody Ware in the No. 51 finished worse than all three of the other RWR cars, narrowing that gap to the bottom three.

Of course, the team didn’t plan on Cody Ware crashing out of the race to finish 36th, but RWR didn’t exactly set up the No. 51 to succeed in that race either.

No disrespect to Cody Ware, but why did RWR not move him over to the No. 52 and use Hand and the SHR car on the No. 51, the car that needs the points?

Why not put Josh Bilicki, who is a driving instructor at Road America, in the cockpit of the No. 51? Bilicki finished 28th in the team’s No. 53 instead.

It’s almost like the team is trying to get the No. 51 into the bottom three just to see if NASCAR is bluffing or not. Would NASCAR really take away a charter that belongs to The King?

Denny Hamlin seemed to think so back in June, and maybe that becomes 23XI’s pathway to a second charter.

“They enforce all of the other rules,” Denny Hamlin said. “I wouldn’t see why they wouldn’t that [enforce this] one. As I see it, if you are in the bottom three for [three] consecutive years and you haven’t worked yourself out of it, there are new teams that want to come into the sport [and] maybe that one gets put up for auction.

“I haven’t had those conversations to figure out how it works, but I certainly know there is a rule in place. You would think they would enforce it, especially with the demand to come into the sport.”

Certainly, all parties involved would benefit more from NASCAR not having to get involved.

So will Ware and/or Petty lease or sell a charter before the start of next season? Or will NASCAR step in to remove one from them?

Something will have to change.

I hate the charter system. The purse should be paid out as they finish. No guarantees on starting unless you qualify at a minimum speed. A lot of nonsense to get money to the teams that really don’t need it.

Get rid of the charters and go back to the old pay out system.

The Petty-Ware charter has been kicking around since RPM shut down the #44 team several years ago. To get around the 1-year-only lease out rule, Murstein and Ware formed a partnership to keep the charter alive. But I imagine that Murstein holds 51%, or better of the deal and will decide its fate here in a few weeks. As the article points out, Murstein could use the money to keep the #43 team afloat.

Now comes the sticky part: It appears that Hamlin is starting to apply public pressure on NASCAR to finally enforce the “bottom 3” rule and may be gambling that they can grab the Petty-Ware charter for a song via auction. Conversely, I imagine Murstein and Ware are hoping to sell the charter for whatever the going market rate might be, or lease it out (again, in the case of Murstein). With 23XL losing out in their offer to merge up with FRM, could it be a little too late in the game for Hamlin to be playing “charter chicken”? Also, did 23XL make a contractural guarantee to Kurt Busch and Monster Energy that the #45 team would have a charter in 2022?

Petty should sell it and try to make the 43 team respectable or just get out of racing.

I got a headache reading this. You need a flow chart to follow this charter business.

If RWR does lose that charter due to the Nascar rule, then it comes down to their own stupidity. Park whatever car #’s you have to after a lap or two in the next four races. Don’t allow Nascar to enforce that rule and hand Michael Jordan a deeply discounted charter. RWR can control their own fate with that charter, just make it appear real.

It’s made me wonder if Rick is more interesred in the business of trying to make money 1st an being competitive second. Since these Charters began it seems to me like he has been the center of attention with all of his moves with these charters. What ever his end game I hope it works out for him. For his sake