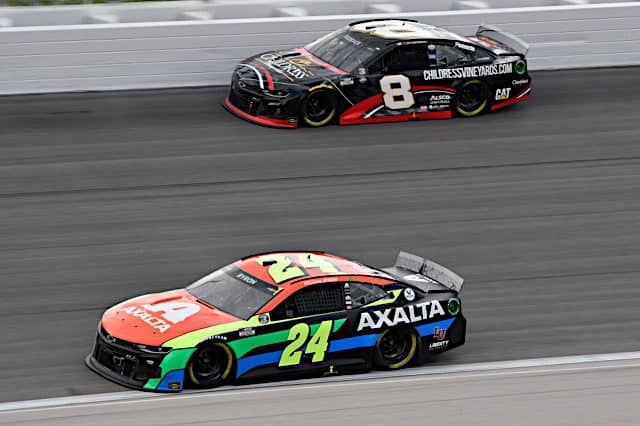 NASCAR VP Scott Miller said the sanctioning body will “do what we think is necessary” to put a stop to the feud between Chase Elliott and Kevin Harvick. Is it time for NASCAR to step in?

Josh Roller: I’m neutral on this, because on one hand, the feud is creating a talking point and excitement for NASCAR. After all, racing is a subcategory of sports, and sports are a subcategory of entertainment. On the other hand, however, you don’t want Chase Elliott and Kevin Harvick making a clown show of racing. The best way to balance this is for NASCAR to sit down with both in the room and explain that hard racing is all well and good, but once one of you is wrecked as a result from contact from the other, both are going to be black flagged and held for a lap. Don’t define what hard racing is or what wrecked is, because NASCAR needs wiggle room and for Elliott and Harvick to question where the line is in an attempt to second guess a potentially bad decision. What NASCAR absolutely doesn’t want is a repeat of Joey Logano and Matt Kenseth from 2015.

Dalton Hopkins: It’s doubtful that NASCAR wants its most popular driver to be wrecked in the middle of the semifinal round of the playoffs by someone who’s not in the playoffs. If it were during the regular season, NASCAR doesn’t step in. Rivalries are fun to watch; they bring out the personalities of each driver on full display for the world, which is something NASCAR is dying for right now. However, if I were either driver, I’d consider the matter finished. Harvick got his payback. It didn’t end with the result he wanted, sure, but he fired his shot. Despite his aggressiveness, he knows better than to push the matter further. I know he answered ambiguously when asked if it was over, but let’s face it, that’s what he does. Elliott doesn’t seem to be looking for more trouble on the matter either. NASCAR shouldn’t overstep its boundaries, but when the two find each other on the racetrack, it couldn’t hurt to throw in a “play nice” radio message to both teams.

Luken Glover: NASCAR has had two problems over the past decade or so: overhyping a rivalry or not promoting one enough. This is one I would like to see a rivalry derive from, but from a racing for the win standpoint. When it comes to beating and banging, NASCAR does need to step in at this point, and it already has; NASCAR held a phone call with both teams this week and warned of serious consequences if the scuffle escalates. With Elliott racing for a title, it’s important NASCAR monitors this so that we don’t have another Kenseth/Logano situation. There’s “boys, have at it,” and then there’s reckless driving.

Which driver eliminated from the NASCAR Cup Series playoffs thus far will have the best bounce-back year in 2022?

Hopkins: Tyler Reddick already seems to be working on it. He placed second last week at the Charlotte Motor Speedway ROVAL and finished in the top 10 at both Kansas Speedway and Martinsville Speedway in their events earlier this year. It’s already been an impressive year for Reddick, career-high stats and all. Even if he hasn’t won, he’s certainly come close on many occasions — last weekend included. I wouldn’t be surprised to see him fighting for more top fives as the year ends.

Glover: William Byron is someone I will be keeping an eye on in 2022. He’s already surpassed his previous career highs in top fives, top 10s, laps led and average finish. This young phenom is still raw and improves each passing year. More experience will only benefit him.

Roller: Kurt Busch makes every team he goes to better, and 23XI Racing has flashed greatness this season. With him behind the wheel of the team’s second car next season, Busch will bounce higher than the rest. I wouldn’t be surprised to see him running better more often in the beginning of the season compared to this season. Chip Ganassi Racing didn’t hit its stride until after the Coca-Cola 600. Busch has floundered a bit while Ross Chastain has continued to run better than he did the first 13 races of 2021. 2022 will be a more consistent year for Busch, and he will contend for more victories than he has the past couple of seasons.

The FIA is considering a launching a motorsports ranking system that would include drivers of other disciplines, including NASCAR. Do you like the idea, and what relevance would it have?

Glover: I am not a fan of the move in any realm of circumstance. If you are a NASCAR fan only, it’s very likely you have never heard of the FIA. That’s because the FIA has very little connection to NASCAR. How are we supposed to trust the credibility of a ranking system that puts more emphasis on other racing disciplines? Trying to compare Lewis Hamilton to someone like Denny Hamlin or Kyle Larson is like comparing apples to oranges. They are two different series with very different cars and distinct venues. Trying to do it with several series will not reflect true talent and will only cause fans to voice their displeasure.

Hopkins: Last time I checked, the FIA has little to no affiliation with NASCAR, and it should stay that way. A ranking system is nothing more than an opinion. NASCAR fans will fight to the death as to who is the best NASCAR driver in history. Making a ranking system will be no different — even if they slap an official FIA label on it. I’m willing to bet it’ll place Hamilton as the No. 1 driver, being the wildly talented F1 pilot he is, but that’s my point. That’s F1. How well would Hamilton do in a stock car at Darlington Raceway? We’ll very likely never know, but chances are he’d get whooped. The same would go for putting Larson in a F1 car. Different disciplines require different skills and techniques. Creating an overarching ranking system disrespects that, and with it the many fascinating disciplines of motorsports.

A win at Texas Motor Speedway ended Kyle Busch’s Cup winless streak last season 33 races in. Will a similar upset happen this weekend? If so, who’s the driver to watch?

Roller: The next two races at Texas and Kansas are going to come down to Larson, Elliott and Hamlin. No upsets will occur this weekend or next. The only upset to possibly take place would be if Byron or Alex Bowman were to win. And that isn’t really an upset.

Hopkins: It has to be Harvick, right? Saying a Harvick win is an upset sounds surprising nowadays, but after having such a dominant season last year and then going winless this year so far, it’s the situation that team is in right now. It’s similar to Kyle Busch‘s season when he won at Texas last year. Plus, it could be argued that if it weren’t for the rain incident last year, Harvick could very well have won that race as he seemed to have the fastest car. In other words, Harvick is good at Texas and he’s looking for some redemption.

Glover: A playoff driver has to be the favorite to visit victory lane this weekend. Larson, Hamlin, Kyle Busch, Elliott and Ryan Blaney have to be viewed as the favorites. Harvick won this race from 2017-2019, but we all know the struggles of Stewart-Haas Racing this season, plus the fact that it’s been a step off on intermediate tracks. Austin Dillon won there last summer, but despite a quiet career year, I don’t see him overpowering the favorites.

It’s not too hard to say who the favorites are this weekend. Kyle Busch, Larson, Elliott and maybe Hamlin? Keep an eye on the Fords, though. Especially the Penske teams. They seem to have found some speed in the last few weeks. Not a lot, but maybe enough.