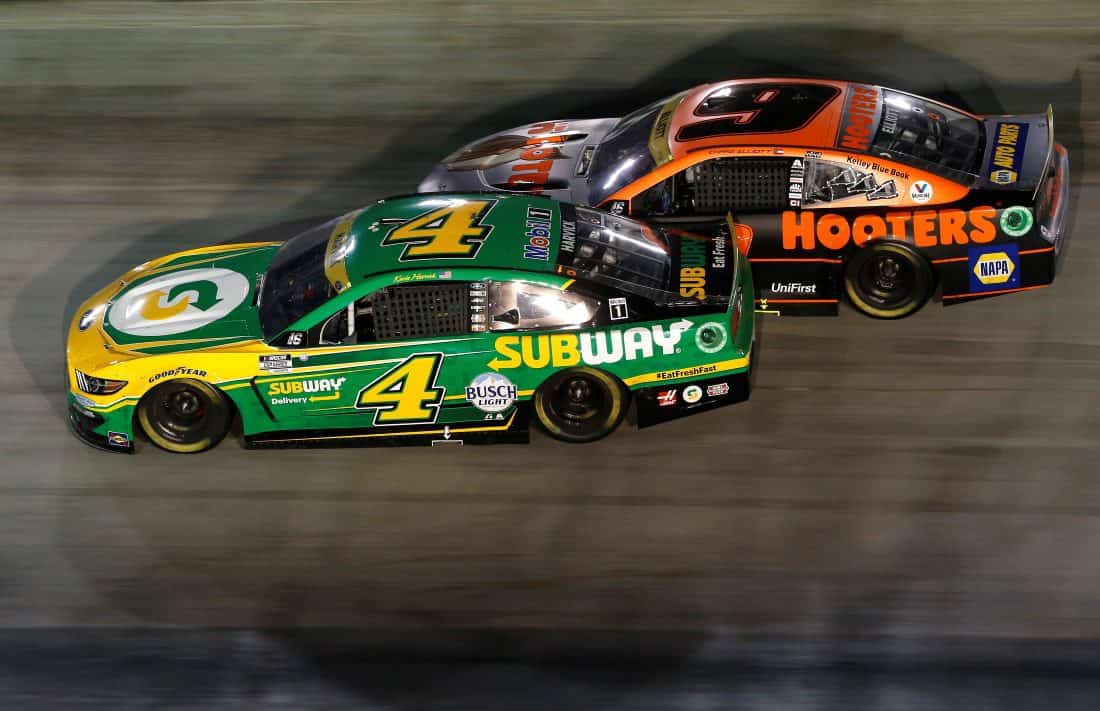 Chase Elliott and Kevin Harvick‘s feud has likely come to an end following a phone conversation between members of both teams and NASCAR officials on Oct. 13.

AP’s Jenna Fryer initially reported on the call, the existence of which was confirmed by Elliott’s crew chief Alan Gustafson in an interview on SiriusXM NASCAR Radio Oct. 14.

“The message that NASCAR delivered is they tried to do the best job they could do in allowing it to happen, and they’re over it,” Gustafson said. “Whatever way you want to look at it from there. I commend them for allowing us to race, but they’ve had enough. They made that clear.”

Earlier in the day, Harvick’s car owner Tony Stewart revealed his feelings on the feud as well.

“I feel bad for both of those guys. I’ve been in that same role those two are in now,” Stewart said during the unveiling of his new NHRA team. “I think NASCAR is at the point where it’s not fun for them to have to deal with this anymore either, so the sooner they can get it all squashed, the more we can get back to business and get racing again.”

The rivalry between two Cup Series champions began at Bristol Motor Speedway during the annual night race in September when the two ruffled each others’ feathers on track that likely cost each other the win.

The feud became more heated at last week’s event at the Charlotte Motor Speedway ROVAL when the two tangled again.

The race resulted with Harvick being eliminated from the playoffs with Elliott advancing into the Round of 8.

The strong arm of the law has come down. About time. If either of them do something blatant from here on they should be suspended for the remainder of the year.,

Do you really think they’ll do something of consequence to Elliott? Harvick maybe. I’m going to wait to hear how they spin it.

Harvick is very sneaky. Watch him around Larson the rest of the year.

Does he owe Larson one? I must have forgotten.

TSB
Reply to  Bill B

It’s not about “owing” anything it’s about Harvick getting away with this behavior for Years!! He came out in the 29 car as a frickin jerk and he will finish in the 4 as a washed up JERK!

Kevin in SoCal
Reply to  Bill B

If they suspended someone for doing something stupid because the fans said so, there would be nobody left on the track by the end of the season.

Jim
Reply to  Bill B

On another note I’ve never seen a rear panel dangle that long without a black flag.

Guess Mr H has a whole lot of pull

And this is another reason I no longer watch this farce called racing. Harvick is really showing his immaturity and lack of class. Harvick needs to man up and grow up. I guess his memory is failing due to all the gas fumes.

what about the child in #9 elizabeth

That “Child” in the 9 car has more class in his little finger that Harvick could ever have!

The only time Harvick wasn’t trouble was if he was winning. Then he was referred to as “Happy Harvick”. All other times he was pulling crap with someone. Even throwing his pit crew under the bus. I’ve said it several times and I’ll say it again, he’s a Bonehead.

I figure it was already over anyway. Harvick looks like a jerk and now just probably wants the season to be over already. Chase is still alive in the playoffs and can’t afford to do anything stupid. Nascar is just making it “officially” over…. or else.

Heck. I think Byron or Bowman should put Harvicks car completely out of the race as soon the green flag waves for the next four.

Marcel B. DesRoches
Reply to  Echo

The sooner Harvick is gone from Nascar the better. He acts like a spoiled child when something happens to him, but runs and hidesnin his hauler when he wrecks someone. Stewart should release him from his contract after the season is over.

Coward chase has no class..he is the one that got kevin out of points.
I hope chase wrecks and he will
Out of championship. Kyle
Larson will kick his ass and will
Be the champion this year.

Atleast Chase took his helmet off like a real man

As the 4 teammates should make sure the 9 doesn’t win the championship. I agree there should be more loyalty to teammates in nascar.

Harvick is just old and washed up and now he is acting like a cry baby 9 year old. Time to retire

He’s far from washed up. He made the chase and advanced into the next round… Every driver struggles at some point. Look at history in Nascar

Hes one yr removed from a 9 win season. Hes as washed up as Tom Brady is in Tampa! #4

Bill B
Reply to  Shug

Statistics are against you. It has been well documented that drivers success falls off dramatically once in their 40s. Maybe he will be an exception but the fact he is at the end of his career.

Bill B
Reply to  Pamela Stewart

NO you idiot, it’s OK because he didn’t actually wreck him. Just saying you are going to do something isn’t a crime until you actually do it.

Y’all wasn’t saying this stuff about Harvick when he was winning in that 3 car,y’all just on Elliott side now the most popular driver.lol,

TSB
Reply to  The big dog

Harvick never had the “3”

Debbie
Reply to  The big dog

Kyle larson is better than chase.
And having kids has nothing to do
Nascar..most of the drivers have kids…kyle Larson will win championship, with his kids.

Ya right this ain’t over…wait until Phenix!!!

Not an Elliot fan at all. But harviick is a douche bag.