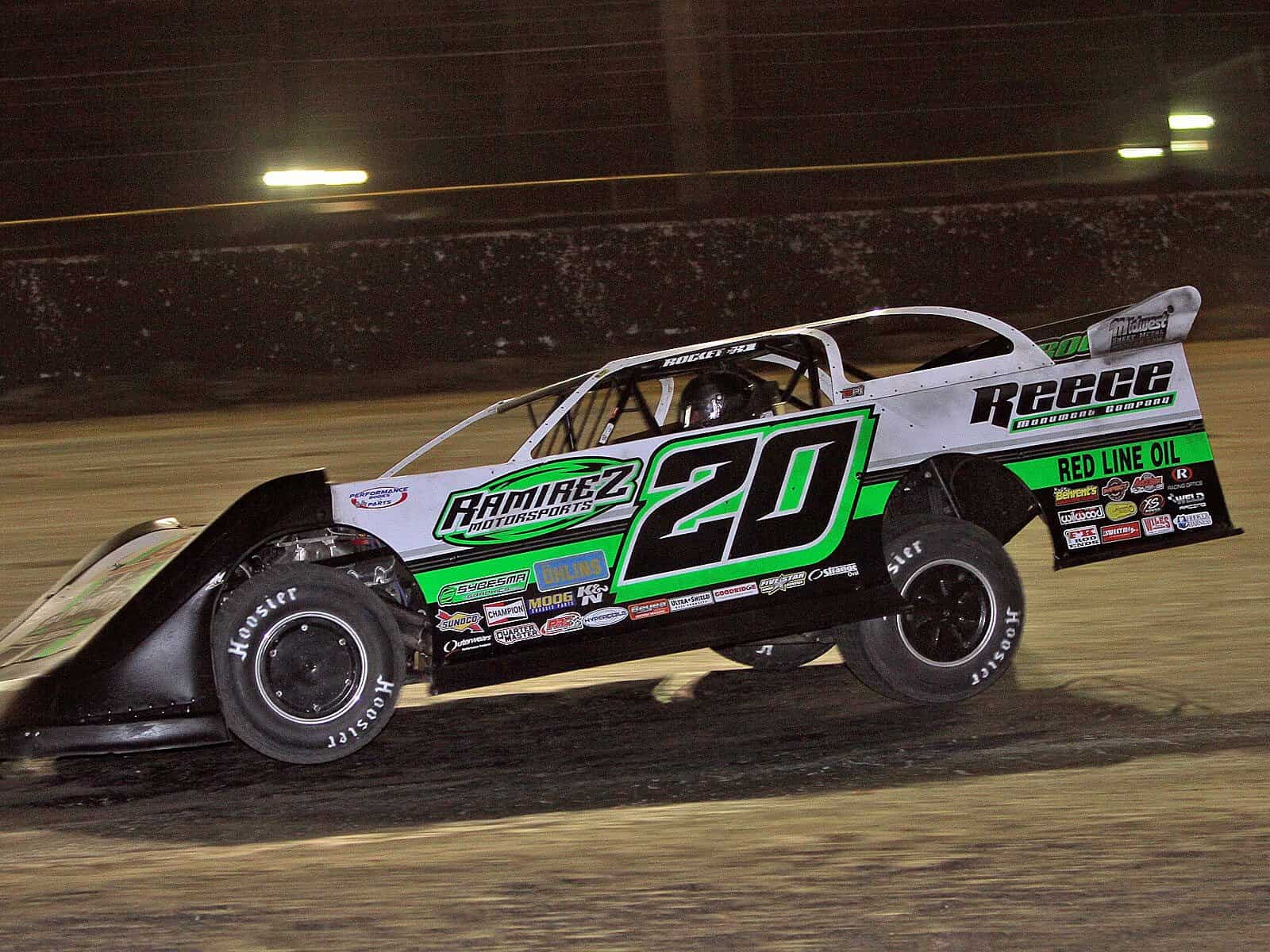 Spotlight: 2021 Flo Racing Night in America
Where: 411 Motor Speedway – Seymour, Tenn. (streamed on Flo Racing)
Why We Chose It: Kyle Larson on the entry list

Stole the show and picked up $20,000 tonight @Speedway411 on @FloRacing Night in America!?

Thanks to my hard working Ramirez Motorsports team and all of our amazing sponsors and fans for the support! ?@Terbo_91 put the pressure on me, thankfully we were able to deliver! ? pic.twitter.com/8wP1rmc5Pz

Though Davenport put on a feverish charge that saw him go from 12th to seventh in the first lap and from fifth to second in the closing laps despite incurring nose damage in a scuffle with Cory Hedgecock, Owens was never seriously challenged for the race win.

Davenport’s runner-up finish allowed him to extend his points lead over Larson (who finished seventh) in the Flo Racing limited series.

Getting aggressive on a restart after the only caution of Wednesday’s 30-lap feature, Mooresville, N.C.’s DJ Vanderley (who currently works on Riley Herbst‘s No. 98 car at Stewart-Haas Racing) threw a lap 14 slide-job on polesitter Nick Drake that forced Drake to slam on the brakes in turn 3, leaving Vanderley to drive away from the field to score his second win of the 2021 season at Millbridge.

Vanderley, who was unchallenged after his slide-job on Drake, bested a feature field that included NASCAR regulars Tanner Gray and Brett Moffitt. Gray finished second on the night, proving to be the only driver in the field able to make substantial ground through the field on the high side of a greasy racing surface.

It hasn’t been a title defense that Owens would have wished for in 2021, but a return to form over the last month that culminated with a major-dollar midweek win, especially one on the eve of the Dirt Track World Championship for the LOLMDS, is setting the stage for the No. 20 to return to title contention in 2022.

The save that Loudon, Tenn.’s Matt Henderson pulled to avoid a wreck between the race leaders and score the 604 crate late model feature victory Tuesday night at 411 was as close to disaster as a race winner can get without wrecking. Henderson said it was better to be lucky than good in victory lane, but he was plenty good dodging the lap 20 calamity that defined that feature.

Let’s stick with that wreck in the 604 feature. Watching the video replay on Flo it seemed pretty obvious that Cameron Marlar ran over race leader Rusty Ballenger trying to take the lead with six laps to go.

Having said that, for as violent as the contact was, credit to all the drivers in the field for handling it as well they did; both Marlar and Ballenger chalked the incident up as a racing deal in social media posts post-race, while winner Matt Henderson even remarked in victory lane that Marlar “had to go” when he did to actually have a shot at victory.

The move that Vanderley put on Nick Drake to take the lead from him in Wednesday’s feature at Millbridge wasn’t exactly dirty, but it wasn’t exactly clean either. Regardless of the verdict, the lap 14 slide-job that decided the race brought Drake to a literal stop in turn 3 and dropped the polesitter to fourth after leading the opening 13 laps.

In case it hasn’t been obvious reading this feature over the course of the season, I love Flo Racing Night in America, and I think Flo does a tremendous job with the coverage they provide. Their Twitter game, however, is proving lacking. There is NO reason that a video replay of a wreck between two drivers battling for the lead in a feature shouldn’t be posted immediately or even night of (right now we’re more than 24 hours after the event ended and there’s still no replay available).

I was public in stating I found the announcement of the major dates of the 2022 World of Outlaws Late Model Series schedule to be underwhelming. After seeing the release of the 2022 LOLMDS schedule today, I feel completely vindicated in that statement. The premier dirt late model tour in the country will race for $20,000 or more 17 times in 2021, including 11 races with a winner’s purse of $50,000 or more. 2022 is going to be the year of money for super late models.

It pays to win, and in 2022 winners will be paid more than at any time in #LucasDirt history.https://t.co/UH9YhcHa88 pic.twitter.com/6WJdm5rmRQ

Let’s hit a couple highlights of this schedule. An expanded schedule at All-Tech Raceway for Florida Speedweeks was expected, as the venue will likely be the marquee for this series once East Bay Raceway Park is demolished later this decade, and that’s a positive given how good their season opener was back in January.

Tyler County Speedway in West Virginia will make headlines in the spring with the rain-delayed Hillbilly 100, though the track will also have competition with the re-opened West Virginia Motor Speedway making an appearance on the slate in June. Damn, it’ll be good to see that track with a healthy car count. And bumping the North/South race at Florence to $75,000 to win, yummy. Florence never fails to put on a late model humdinger.

Where it Rated (on a scale of one to six cans with one a stinker and a six-pack an instant classic): We’ll give the midweek a solid four Wiseacre Astronaut Statuses. The super lates put on a show worth slogging through some messy crate late model racing for at 411, and Millbridge as always ran a quick efficient program with slide jobs aplenty. Plus, there’s no way to look at the 2022 LOLMDS schedule as anything but very good news.

Up Next: Big-money fall races continue to dot the schedule, with this weekend highlighted by the $50,000 Speed Showcase 200 for the Short Track Super Series at Port Royal and the $100,000 Dirt Track World Championship season finale for the Lucas Oil Late Model Dirt Series. Coverage will be available on Flo Racing and MAVTV Plus, respectively.