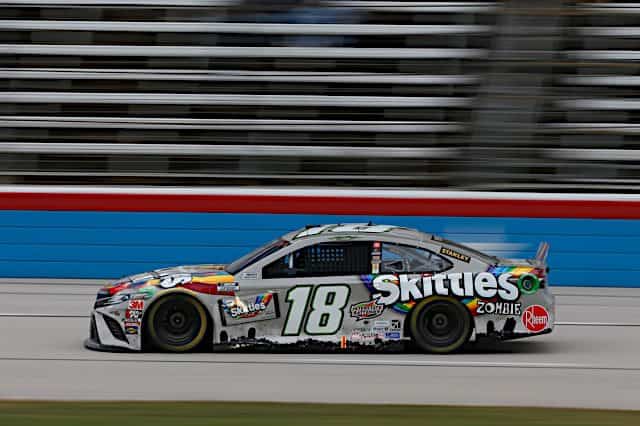 Yeehaw! The NASCAR Cup Series travels to the Lone Star State for the first playoff race in the Round of 8. Let’s round up drivers to fill your daily fantasy NASCAR DraftKings roster for Sunday’s (Oct. 17) race at Texas Motor Speedway.

After a wild event at the Charlotte Motor Speedway ROVAL, teams get back to a couple of ovals, 1.5-mile racetracks at Texas and Kansas Speedway. Sunday will mark the first points-paying event of the year at Texas, as it hosted the All-Star Open and Race in June (and will do so again next May). Let’s hope it won’t be like last year’s rainy playoff event that didn’t finish until Wednesday. For now, prospects look good; there’s no rain in the forecast on Sunday.

Although this weekend is the first time all 39 cars will be on track at Texas at the same time this year, it isn’t the only event held at a 1.5-mile course. Drivers have raced this length seven times so far in 2021, so you have a lot of information available to help you make your roster. Recent Texas races (within the last three or four years) can also indicate which drivers perform well there.

Before I share my DraftKings picks for Texas, here’s a look back at last week’s results from the Charlotte ROVAL.

Right off the bat, you can see AJ Allmendinger‘s measly .6 fantasy points. Yuck. But he ran in the front half of the pack for much of the race before his engine blew, so it was a solid pick… just bad luck. Ryan Newman also had trouble and crashed out early, resulting in a negative score. At least Tyler Reddick did well, gaining 27 positions to earn a second-place finish.

A score of 249.9 won $0.67 in the $2,500 Quarter Jukebox contest; the winning entry had Kyle Larson, Kyle Busch and Chris Buescher, all of whom finished inside the top four.

Many may choose Larson or Kevin Harvick first, which is perfectly fine since Larson is favored to win and Harvick starts 24th. However, I opted to play one of the hottest drivers in the series: Hamlin. He broke through for his first victory of the season at Darlington Raceway in September and tacked on Las Vegas Motor Speedway at the end of the month. Hamlin has led over 100 laps in three of the last six events (including Darlington and LVMS).

Unfortunately, the No. 11 Joe Gibbs Racing pilot hasn’t been as good at Texas for some reason. Hamlin has three wins there, including the spring 2019 race, but has just four top 10s in the last nine races. He finished 20th or worse in the other five, making him a bit of a boom-or-bust pick. Hamlin even was dead last in the All-Star Race earlier this year! But he ran ninth last fall at the track, so he has some good results as of late and comes in with the momentum you want in a playoff driver.

Hamlin will roll off pit road in second place and could notch some laps led and fastest laps if his team gets the setup right.

I’m sure you remember last fall’s rainy and misty race that Busch eventually won in his Zombie Skittles No. 18 Toyota. Like Harvick this year, Busch hadn’t won in a while prior to that race and was no longer in championship contention. However, he led 90 laps en route to the victory, his fourth trophy in the Lone Star State. He also has four straight top-10 results at this track.

Busch has been very good at the 1.5-mile ovals, as he’s finished in the top 10 in each one this year. He was out front for 20 circuits at Kansas Speedway and claimed the checkered flag by the end of the race. Additionally, he led 91 laps in July at Atlanta Motor Speedway before ultimately crossing the line second to elder brother Kurt Busch.

There’s a bit of a pattern here, as Blaney is lining up fourth next to Busch in the second row. But Blaney deserves to be considered in daily fantasy in his own right; he won at Michigan International Speedway and the spring Atlanta event. He also was fifth at Atlanta in July and the South Point 400 at Las Vegas a few weeks ago. While his strongest tracks appear to be the ones using the 750-horsepower package, Blaney has still finished well at other track types.

Although the No. 12 Team Penske driver has yet to find victory lane at Texas, he has done well in six of the last seven races there. In the fall 2018 event, Blaney led 40 laps on the way to a second-place result. Plus, last year he led 170 total laps (150 in the summer) before finishing seventh and fourth in the two 2020 events, respectively.

Blaney should continue his strong run at Texas and post a high fantasy score on DraftKings.

Dillon snuck in a win at Texas thanks to a call on pit road last July. It was just his second top 10 at Texas – his first one came in fall 2018 after starting 26th — but that doesn’t mean he had poor results in the other 14 races. In fact, he finished 19th or better in half of these events. In the last five Texas races, Dillon has come home 14th or further up the running order.

Dillon’s had similar performances at the 1.5-mile courses this season. The worst the No. 3 Richard Childress Racing driver has finished at this track length in 2021 is 13th at Las Vegas a few weeks ago. He was sixth at Atlanta in the spring and in the Coca-Cola 600 at Charlotte. Dillon also was 10th at Kansas and at Michigan, he appeared to have his best car of the year but crashed out at the end of stage two.

Don’t be afraid to place Dillon in your DraftKings contests, even though he’s starting 15th.

Suarez doesn’t have a whole lot of good results in Fort Worth, unfortunately. Still, he was third at Texas in both 2019 events and led 25 laps in the fall race while competing for Stewart-Haas Racing.

The main reason why I chose Suarez (besides his lower salary) is his results at the 1.5-milers this year. He gained eight spots in the spring at Atlanta en route to 17th. He also drove his No. 99 Trackhouse Racing Team Chevrolet to an 11th at Kansas, then a 15th at Charlotte and the fall LVMS event. Suarez is $600 less than Dillon on DraftKings and starts 19th, leaving some room to earn position differential points.

Wallace doesn’t have much experience at Texas, but he did nab an eighth-place finish in 2018 while running for Richard Petty Motorsports. He also was 14th last July. The fall 2020 race wasn’t too kind to him, however, as Matt Kenseth crashed into the No. 43 car early on. Wallace went home 38th.

But the driver experienced jubilation this year, earning his and 23XI Racing’s first Cup victory at Talladega Superspeedway a couple of weeks ago before following that up with a 14th at the Charlotte ROVAL.

Wallace’s results at the “cookie cutter” tracks are similar to Suarez this season. The No. 23 Toyota was 16th and 14th in the spring and summer, respectively, at Atlanta. He also grabbed a 14th at Charlotte and a 16th at Las Vegas at the end of September.

In this race, Wallace will line up 18th, one spot ahead of Suarez, and should post a good score if he finishes 15th or higher.