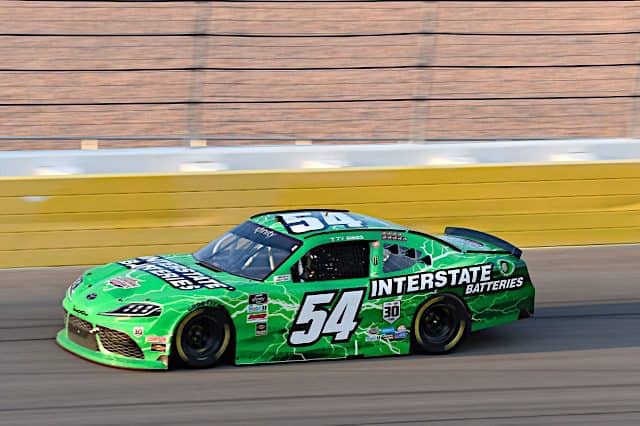 Interstate Batteries is continuing its partnership with Joe Gibbs Racing in a multi year agreement starting in 2022, sponsoring Kyle Busch in the NASCAR Cup Series and Ty Gibbs in the Xfinity Series, the team announced Friday (Oct. 15).

The company will be aboard Busch’s No. 18 for six events and Ty Gibbs’ car in three races.

Interstate has been with JGR for 30 years and celebrated the team’s first victory with Dale Jarrett, the 1993 Daytona 500. It also was on Bobby Labonte’s 2000 Cup championship-winning No. 18.

“Norm and Tommy (Miller) really took a chance on us because we literally had nothing when we first went to see them. No race shop. No driver. No crew chief. It was just a dream on a sheet of paper,” Team Owner Joe Gibbs said in a release. “To have a successful partnership for more than three decades it first has to work for business, and I love that part of it. You have to prove value for your partners. But it is the relationships built over time that makes this so special. From Norm and Tommy to the leadership now of Scott (Miller), as well as Lain (Hancock) running operations. Of course, on our end, it’s been J.D. (Gibbs), and now it’s Coy (Gibbs), and of course we have the grandkids coming. When you reflect on all that has happened over the years and everyone that has been involved, I really think God had a role in bringing us together.”

Busch has 59 victories, 227 top fives and 335 top 10s in his Cup career so far. This year he’s won twice and earned 13 top fives and 19 top-10 finishes; he sits fifth in the points standings and is still in the running for the championship.

See also
Eyes On Xfinity: Ty Gibbs vs. Sam Mayer is the Next Great Rivalry

Gibbs also leads the ARCA Menards Series standings with one race left in 2021. He nabbed 10 wins and 18 top fives this year.

A lot has changed in 30 years, but certain things have remained constant: @interstatebatts + Joe Gibbs Racing!

We are excited to announce that @interstatebatts will continue its on-going partnership in a multi-year renewal agreement. #TeamInterstate pic.twitter.com/vnt379QONG