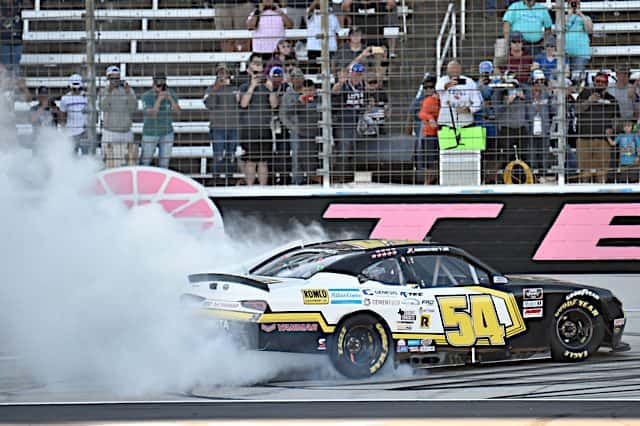 Regardless of the driver, the No. 54 Joe Gibbs Racing Toyota is bad fast whenever it races. It robbed the playoff drivers of a win at Texas Motor Speedway on Saturday (Oct. 16), the team flexing its might as John Hunter Nemechek got his second career win after battling teammate Daniel Hemric in the Andy’s Frozen Custard 335.

Hemric was in the lead until a caution near the later part of stage 3 came out, sending most of the field to pit road. Nemechek took two tires and the lead during the round of stops, eventually driving away as the still-winless Hemric settled for his 10th career second-place finish.

“I had to win to prove to myself I could do this,” Nemechek said in his post-race interview. “It’s just like taking a step back to the truck series: I wanted to get back to victory lane.

Cindric took the win in stage 1 after leading the field to start the race. A handful of drivers battled for the lead, all trying to secure points and the stage win for the playoffs. Hemric, Gragson, Nemechek and AJ Allmendinger were all battling for the top position until Cindric won out.

Sam Mayer and Landon Cassill both had issues at the same time, bringing out the first caution for an incident. At the end of the stage, JJ Yeley also had an issue, forcing a one-lap shootout.

Wild restarts were a constant factor throughout the day, and stage 2 produced a few with some more cautions. Debris brought out the caution for the fifth time, and a few laps after going back to green Ryan Sieg lost his No. 39 car and spun to freeze the field yet again.

The battle for the lead during the stage was between the Joe Gibbs Racing teammates in Hemric and Nemechek. The latter went on to win the second stage, which had a relatively calm conclusion despite the number of cautions that plagued the opening half. Allmendinger and Gragson had issues that sent both Chevrolets back down pit road after the stage, with the No. 16’s crew dropping the jack early and Gragson suffering a vibration.

Mistakes on pit road can be costly! @SteveLetarte takes a closer look at what happened to @AJDinger during his most recent stop. pic.twitter.com/1XCESpBJgd

Shortly after the final stage began, the eighth caution flew for Jade Buford, Tanner Berryhill and Dylan Lupton all getting together.

Nemechek led the field for the majority of the stage until another caution flew, this time for CJ McLaughlin spinning around, and the No. 54 driver was subsequently penalized during the pit stops for his pit crew jumping the wall too soon. Hemric assumed the lead when the race went green again with 51 to go, but another yellow waved when Brandon Brown spun with 28 laps remaining and slammed the inside wall on the backstretch.

After being penalized on the last pit cycle, Nemechek took two tires and won the race off pit road as most of the leaders came in aside from Harrison Burton. Burton and Nemechek battled for the lead before the better tires on the No. 54 machine prevailed; Hemric battled his teammate with his fresh tires vs Burton’s old tires to take second. Nemechek, though, cruised to the victory, his second career Xfinity Series triumph and nearly three years to the day after his first career win (Oct. 20, 2018 at Kansas Speedway).

The Xfinity Series travels north this week to Kansas, where the field will compete in the Kansas Lottery 300 on Saturday, Oct. 23 at 3 p.m. ET with coverage on NBC.

The 74 was one lap down after FOURTEEN laps. How in the world can he go fast enough to spin out by himself between turn 4 and the finish line? I guess he had to scratch an itch on his arm.