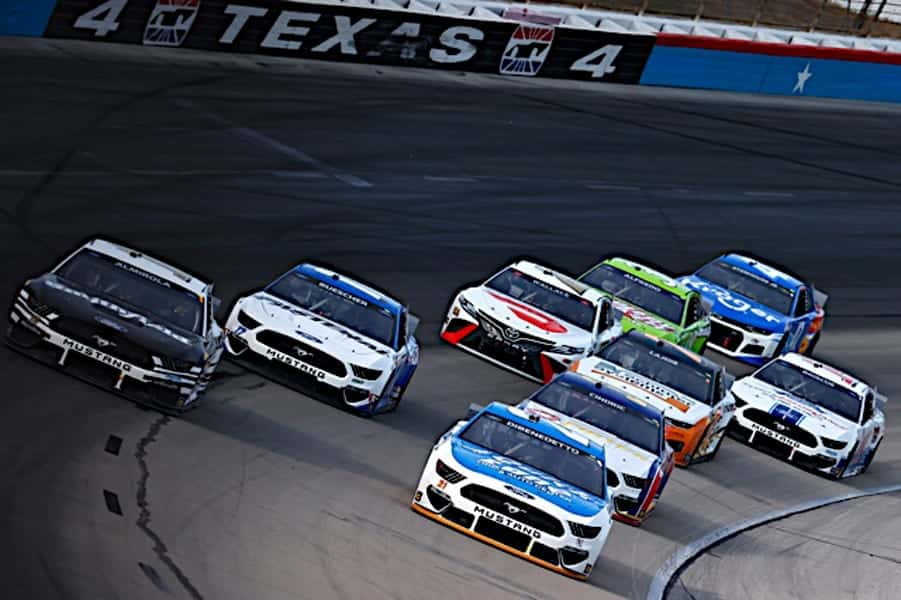 The NASCAR Cup Series hops its second playoff wagon westward and head to Texas Motor Speedway, with the Round of 8 set to kick off in the Lone Star State on Sunday (Oct. 17). It’s just the second race to be held not on or near the East Coast after the Round of 12’s opener in Sin City.

Larson is 42 points to the good, with Hamlin, Truex and Blaney all single-digit points above the cutoff. The quartet below the line are all 16 points or fewer behind on-the-bubble Blaney.

The Cup Series has only visited Texas once this year, for the All-Star Race, so Sunday is the first “normal” race at the track in a calendar year. Last fall’s event wasn’t even normal, though: the race took four days to finish after rain halted it on the scheduled Sunday, persisting for nearly three days until it finally ran to completion the ensuing Wednesday.

As for this afternoon, Larson rolls off on pole with Hamlin alongside, followed by Kyle Busch, Blaney and Logano to round out the top five. Elliott, Keselowski, Truex, Tyler Reddick and Chris Buescher fill out the top 10.

Elliott was the only playoff driver to fail twice, alongside the non-playoff cars of Chase Briscoe, Cody Ware and Corey LaJoie. The No. 9 passed on the third try, but will drop to the back to start the race. Christopher Bell inherits a top-10 starting spot as a result.

Appears everyone is through. Expected to the rear: 9 14 51 66 7 15. They all passed on third time. For those asking, appears Elliott will start around 30th as most of the failures are in his row.

The younger Busch brother leads all active drivers in wins at Texas with four, while both Hamlin and Harvick have raced up three apiece over the last few years. Logano and Kurt Busch each have one as well, while Austin Dillon snuck in a surprise triumph at last year’s first race there. Ryan Newman won one of 2003’s races in the Lone Star State, making him the earliest active driver to win at the track.

Last fall, it was a Toyota sweep of the top three spots, with Kyle Busch’s Zombie Skittles car winning in appropriate weather for the scheme: a misty, fog-shrouded afternoon that turned to night as the race wore on. It was Busch’s first victory in a frustrating, winless-up-to-that-point season, and Truex and Bell followed him under the checkered flag. Blaney and Alex Bowman rounded out the top five in that event.

Bowman, Harvick, Bell and William Byron were eliminated from the playoffs last Sunday (Oct. 10) at the ROVAL, while Larson is coming off a triumph at the hybrid layout. Elliott and Harvick, who clashed at the ROVAL after their Bristol Motor Speedway spat, were admonished by NASCAR in the days after they tangled again.

On Saturday (Oct. 17), John Hunter Nemechek scored his second career Xfinity Series victory, nearly three years to the day after his first win in that division. Nemechek’s triumph over Joe Gibbs Racing teammate and NXS playoff driver Daniel Hemric kept all postseason competitors from locking into the Championship 4 and held Hemric to his 10th runner-up finish in the series.

Formula 1 is off this weekend before visiting the U.S. on Oct. 24. It’s a busy couple of weeks for Texas overall, with the F1 cars taking to Circuit of the Americas next Sunday for the United States Grand Prix.

As for the Cup Series’ main event, flip over to NBC at 2 p.m. to catch all the action as the Round of 8 begins.