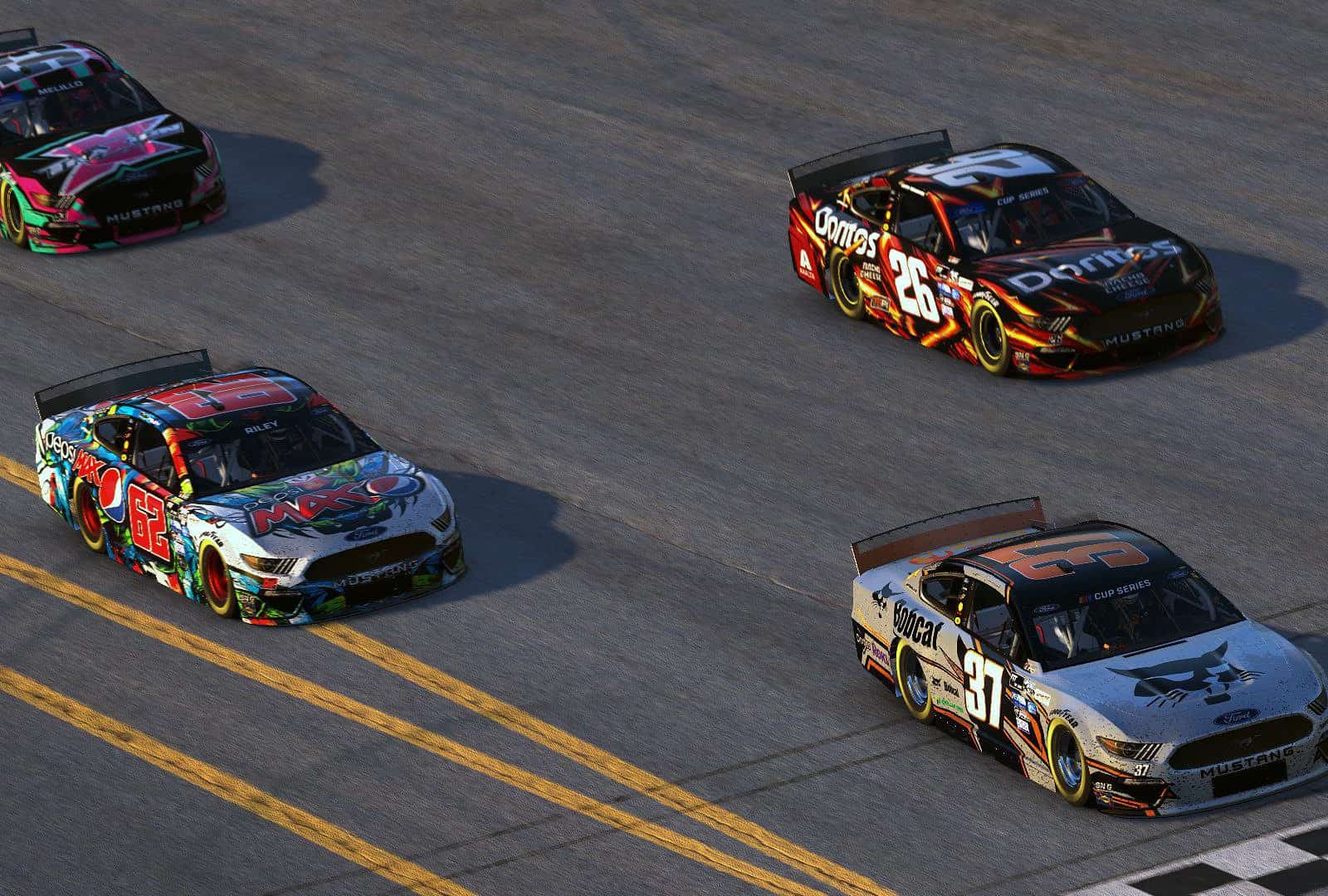 This week in the Roundup, we’re taking a look at the two full-season series that we’ve been covering since the start of the 2021 season, the 100% Cup Series and the FTF Cup Series. While the eNASCAR Coca-Cola iRacing Series is now complete, the rest of the full-season series will be closing out their seasons as well.

Both series are in the midst of their playoffs, with the 100% Cup Series on schedule with the NASCAR Cup Series and FTF one week behind due to a weather delay a few weeks ago. While Monday Night Racing and the eNASCAR Road To Pro are on a bit of a break, they’ll both be back in November.

Both of the Cup Series took to Talladega Superspeedway in the time since the last Roundup came out. While the 100% Cup Series also took a trip to Charlotte Motor Speedway for some ROVAL racing, the FTF Cup Series will host their Roval event on Sunday night, Oct. 17.

The middle race of the Round of 12 took the 100% Cup Series drivers to Talladega for a full-length parade of speed around the 2.66-mile superspeedway.

With the iRacing aero package preventing drivers from racing side-by-side competitively in the Gen 6 cars, drivers took turns leading the parade around through the event, only catching the two stage cautions throughout the race. Jon Dulaney started on the pole and won the first stage while Jason Taylor was able to capture the second stage. In the closing laps, it looked like Cam Stone was in control of the long line as they took the white flag.

Coming through the tri-oval, all hell broke loose. As the majority of the field wrecked behind the leaders, Stone got turned around, and Dulaney was able to scoot by, winning by just 0.020 seconds.

We head to thunder country tomorrow night!! The Buddy Green Memorial 500 at @TALLADEGA as the fight to advance to the Round of 8 continues!!! @DownShiftE @simrace247 @TraxionGG @OverTake_gg @GridRanking @SRU_com @iRacersLounge #iracing | #simracing | #esports pic.twitter.com/oyiTrQ58JY

In every road race that Jon Dulaney has participated in this season, he’s been the man. A perfect record through four races, winning at COTA, Road America, Watkins Glen and Indianapolis, Dulaney looked to make it a perfect five-for-five at the Charlotte Roval.

Dulaney took the pole position and won the first stage of the race, but that was where the good luck streak ended. On the following restart, Dulaney did his best Chase Elliott impression and drove it straight into the tires of the Heartburn Turn. That dropped him back outside the top 10, but he would continue to battle back.

After a few run-ins with other drivers trying to get back to the front, Dulaney hit the incident limit at lap 57. He had multiple run-ins with Bryson Hixenbaugh, but as Dulaney was disqualified, Hixenbaugh was able to continue on. The lead went to Robert Miller, who never looked back after that.

Miller, the Sonoma Raceway winner when Dulaney wasn’t in attendance, was able to win the second stage and the overall race for his second win of the season. As a part-time driver, Miller doesn’t advance in the playoffs, having not made them. Meanwhile, Dulaney was prevented from gaining a final five to six bonus points for the next round.

With Dulaney having won both the Las Vegas Motor Speedway and Talladega races to advance already, the final seven spots in the next round were handed over to the top performers in the points. Those advancing include Bryson Hixenbaugh, Cam Stone, Adam Benefiel, Jason Taylor, Brandon Pierce, Sean O’Brien Jr. and Demaris Hickenbottom.

As the playoff field dwindled from 16 drivers to 12, a new round of races would challenge championship hopefuls, starting things off at Las Vegas Motor Speedway. The first race of the Round of 12 would bring drivers back into the 2012 NASCAR Car of Tomorrow vehicles for 250 miles of slipping, sliding and challenging fun.

The man of the night was Brian Mercurio. While Michael P. Frisch started on the pole position, Mercurio didn’t even let him lead the first lap. Mercurio led 140 of the total 167 laps, also sweeping the stages in the process. However, the race for the win came down to a possible fuel mileage scenario.

Both David L Brown and Seth Noell were ready to make it a show as they two opted to stretch the fuel. Brown took over the lead with 22 laps to go while in extreme fuel saving mode. Noell wasn’t saving as much, likely hoping for a yellow. Noell took control from laps 150 to 161, eventually pitting with six laps to go.

Brown continued on and led up until three laps to go, but he had to start pushing harder if he wanted to keep the leaders behind. It wasn’t to be, as Brown was passed by Mercurio with two laps to go. Mercurio went on to hold off Tyler Garey for the win while Brown ran out and finished last on the lead lap in 17th.

With the current aero package on superspeedways, the FTF Cup Series drivers were faced with a conundrum. Ultimately, they went as scheduled, but had attempted to make the race more fun for competitors and viewers.

In practice, drivers were able to tandem for the fastest laps, and it was hoped that this would continue in the race. Unfortunately, it did not, and the 113-lap event turned into a parade of speed. Logan Helton was able to take the pole and subsequently also led the most laps in the process, 42.

There were differing strategies that played out through the race. Smaller packs of cars could run faster if they all ran in a tight line. Three cars nose-to-tail seemed to be the most efficient grouping as drivers like Blake Reynolds and Michael P Frisch found themselves at the front by the end.

After a large crash with a few laps to go, the restart was lackluster. Tyler Garey and Matthew Zwack got a run and nearly tandem’d to the lead, but Garey spun and Reynolds went on to claim another win and a pass to the Round of 8 in the playoffs.

With only one race remaining in the Round of 12, only three drivers are guaranteed to move to the next round with a win (Mercurio and Reynolds) or by points (Frisch). Kevin King, Brandon Hawkin, Tyler Garey, Alex Kolonics and Chris Wetz are currently above the cutline.

Garrett Konrath, Ryan Doucette, Gary Watterworth and Evan Rice will face an uphill battle as the round concludes at the Charlotte ROVAL on Sunday.

FTF Racing heads to Charlotte Motor Speedway’s ROVAL for the last race in the Round of 12 on Sunday night, live at 8 p.m. ET on BottomSplit.