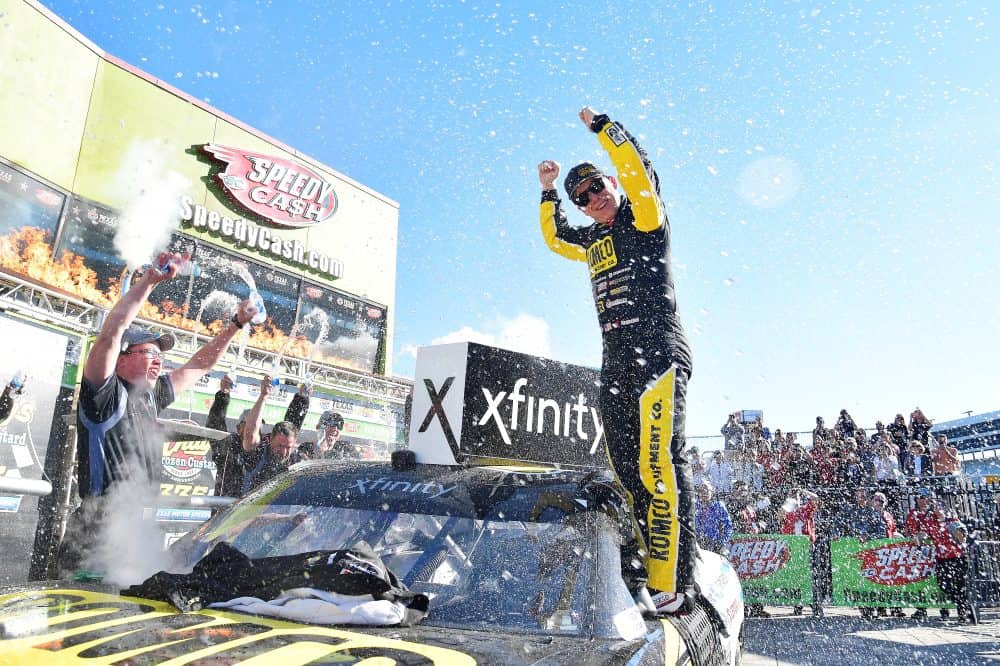 The Andy’s Frozen Custard 335 at Texas Motor Speedway on Saturday (Oct. 16) produced a new winner for 2021, disappointment for a series journeyman and close racing that has become commonplace on mile-and-a-half tracks in recent years.

John Hunter Nemechek stormed to victory through a combination of officiating adversity, tire strategy and a lot of traffic. Playoff contender Daniel Hemric collected his 10th career runner-up finish, and Noah Gragson nearly found himself in yet another altercation with a fellow competitor.

The win is the second of Nemechek’s NASCAR Xfinity Series career. But it will bear no points or championship impact, as Nemechek is currently competing full time in the Camping World Truck Series.

To quote Randy Jackson during every episode of season 10 of American Idol, the non-playoff drivers are “in it to win it!”

Nemechek took the lead from a gambling Harrison Burton with 19 laps to go and managed the race perfectly from there on. Not once did second-place finisher Hemric come within half a second of Nemechek, even while Nemechek negotiated lapped traffic in the race’s waning moments.

As a result of this win, Nemechek joins Josh Berry and Brandon Brown as non-playoff drivers who have denied championship contenders the opportunity to lock themselves into the next round of the playoffs. That denial will taste particularly sour for Hemric, who came within one properly enduring green flag run of his first career win. Hemric finished a respectable second but still finds himself below the cutline as the series heads to Kansas Speedway.

The win was well earned for Nemechek. The 24-year-old was handed a pit-road penalty on lap 144 as a tire carrier left the wall a fraction of a second too quickly. Over the race’s final 50 laps, Nemechek looked as though he was racing against golf carts, making quick work of the better half of the lead-lap cars.

While such a performance by a non-playoff car certainly spells frustration for the likes of Hemric, the parity is certainly good for those watching. Hopefully the Xfinity formula maintains that nature into the final three races of the season.

The race was marred by cautions, all but two for minor/single-car incidents. The longest green flag run of the race spanned from lap 98 until lap 144. By the end of the first stage, the yellow had flown twice after Landon Cassill and JJ Yeley stalled on track on separate occasions. As for stage 2, the yellow first flew for debris on the track and was displayed yet again when Ryan Sieg spun down the backstretch after less than five full laps of racing.

The final and longest stage saw the two major incidents of the afternoon. On lap 100, contact between Dylan Lupton and Tanner Berryhill left Jade Buford with no good options to avoid the chaos in front of him. That resulted in a three-car accident, which led all three drivers involved to retire with their cars far beyond repair.

Following a second caution in the final stage for a spinning CJ McLaughlin, Brandon Brown became the final victim of a slippery Texas Motor Speedway. Two weeks removed from his first career win, Brown was enjoying a decent day until the back end of his No. 68 Chevrolet stepped out exiting turn 2, sending Brown head on into the inside wall with considerable force.

Fortunately, all drivers involved in on-track incidents walked away without injury.

While all of the day’s cautions were a tad unusual, the accident involving Lupton, Berryhill and Buford stands out for both its severity and the sheer luck that befell Lupton.

Watching the incident unfold live, it initially appeared that Lupton had sustained an impact from Buford similar to that experienced by Larry Pearson at Bristol Motor Speedway in 2010. Fortunately, the replay showed that the impact had spared the driver’s side of the No. 26, instead showing that the No. 48 plowed into Lupton’s front-left. A nasty impact nonetheless, but certainly nowhere near as dangerous as it had potential to be.

Likewise, Brown’s incident was no joke in its own right. NBC Sports’ Brad Daugherty observed that many cars seemed to be less planted than the series’ previous trips to Texas had shown, and it seemed that Brown’s crash was a great illustration of how thin the line between being out of control and being slow can get. At the end of the day, Brown walked away, which is paramount.

On the topic of things that looked to be turning ugly but wound up anticlimactic: early contact between Gragson and AJ Allmendinger sent the No. 16 up the turn 1 banking, costing him multiple positions. While the contact didn’t look explicitly deliberate, Allmendinger was not happy by any stretch of the word. Fortunately for both drivers and the NASCAR officials, neither driver attempted any further retaliation or antagonization, despite hints to the contrary.

Sam Mayer’s talent hasn’t been a secret for some time. That said, consistency had eluded the young Wisconsinite to this point in his young Xfinity career. What was made clear on Saturday was that on his day, Mayer is fast.

He spent much of the day floating around the top 10 and even collected a third-place finish in stage 2. Mayer came home 13th, nearly nabbing his fourth top-10 finish of the season. This form, while still being built, bodes well for Mayer’s maiden full-time campaign for JR Motorsports in 2022.

Both Joey Gase and Justin Haley will both be back behind the wheel for the NASCAR Cup Series’ Autotrader Echopark Automotive 500 on Sunday, Oct. 17. No full-time Cup drivers partook in Saturday’s Xfinity event.

“Let him know if it comes back around, it sucks to be him.” – AJ Allmendinger on Noah Gragson

“I had to win to prove to myself that I could do this. It’s just like taking a step back to the Truck Series. I wanted to get back to victory lane.” – John Hunter Nemechek

While Saturday’s race was choppy by Texas standards, the patches of green flag racing we did see were not too shabby. Drivers didn’t display much difficulty with aeropush as many mile-and-a-half tracks have produced recently, and the racing was close without being a superspeedway-styled pack race.

Nemechek’s victory means that no one is perfectly safe heading into Kansas, and only two opportunities remain for playoff drivers to lock themselves into the Championship 4 with a win. Should a non-playoff driver win at Kansas, helmets are likely to fly at Martinsville Speedway.

Kansas will play host to the next race on the Xfinity schedule for the Kansas Lottery 300 on Saturday, Oct. 23. Coverage begins at 3 p.m. ET on NBC. Hemric, Haley, Burton and Brandon Jones head to Kansas looking to move above the cutline before the series moves onto Martinsville.

ANY driver who’s in the 54 will win, including Baby Busch’s grandmother.