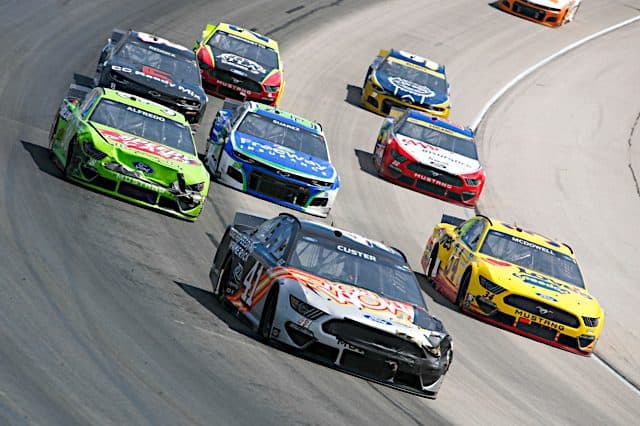 We’re now in the Round of 8, where things kick it up a notch. Starting Saturday, drivers in the NASCAR Cup and Xfinity Series each had the chance to lock into the Championship 4. Kyle Larson was able to do so in Sunday’s AutoTrader EchoPark Automotive 500, while no one did Saturday.

Before we get into the race itself, there was a rather big issue that occurred Sunday morning that we are still seeing the effects as of this writing. Sunday morning saw the Sinclair Broadcast Group, the country’s largest owner of local TV stations, get hacked.

This ransomware attack took many of the company’s 294 stations off the air, or forced them to air alternate programming. Sinclair owns 25 NBC affiliates in markets such as Las Vegas, San Antonio, Toledo, Mobile-Pensacola, Tallahassee and Syracuse. It is unclear whether affiliates in those markets would have been functional enough to air the race.

Here in Albany, Sinclair does not own the local NBC affiliate (WNYT). However, they do own our CBS (WRGB) and CW (WCWB) affiliates. My CW affiliate was out all day Sunday and aired alternate programming for most of Monday.

If this situation negatively affected your ability to watch Sunday’s race, please comment below. Had your NBC affiliate been blacked out because of this mess, you likely would have been forced to watch on the NBC Sports App.

Sunday’s 500-mile Cup race set a record that I don’t think Texas Motor Speedway would have liked to have set this past weekend. There were a grand total of eight lead changes in the race, an all-time record low for Cup races on the 1.5-mile quad-oval (the previous record was 12 in 2016). Larson took the lead from teammate William Byron on lap 83 and only relinquished it due to the pit situation towards the end of stage one. Once the green came out in stage two, it took Larson five laps to get back to the lead. He was not overtaken for the remainder of the race from there, leading 218 consecutive laps (327 miles).

Needless to say, this created a bit of a challenge for NBC. Larson basically being unchallenged for more than half of the race meant that there really wasn’t that much action at the front of the field.

Sunday saw NASCAR and SMI experiment with resin on the track as opposed to putting down more PJ1 TrackBite. The TrackBite has ruined one of the most competitive tracks for INDYCAR, and the facility can’t seem to draw the solution out of the surface so that they can permanently get rid of it. The hope was that the resin would make for a more susceptible environment for laying down rubber.

The use of these substances has turned the traditional groove widening upside down. Texas Motor Speedway has been doing this almost since they reconfigured the track to the current design for the 2017 season. If anything, it’s made it harder for the track to weather and gain the characteristics necessary for decent racing.

Sunday’s event saw a decent amount of racing and it seems that NBC took pains to show some of the action further down the order, more so than the typical playoff race. Non-playoff contenders like Tyler Reddick and Christopher Bell putting themselves into the conversation didn’t hurt, either.

Outside of Larson’s dominance, one of the biggest stories of the day was the big shunt on the backstretch on lap 31. It’s pretty rare to get a track blocking incident in the Cup Series these days.

The coverage of that incident struck me as being a little slow to react. Dale Earnhardt Jr., especially in the booth, is going to be on his game. He’s an excitable man in the booth, and the production has to learn to follow the cues from the booth. They’re telling you things and you have to react like that. As the replays showed, they had plenty of views available, but the live broadcast was just slow getting there.

This wasn’t an isolated thing as there were multiple instances all weekend where this was an issue. I’ve spent some time in production trucks in the past, most recently in 2018. The director has plenty of monitors at his disposal and an incredible amount of equipment is on-site — more than most of you reading this would believe. I think it may be as simple as hitting the button just a little quicker to cut to the proper camera (they’re all designated with numbers and often with nicknames for the cameramen operating them; don’t worry, the nicknames are not dirty).

Sunday’s broadcast didn’t feature any glaring technical issues or anything along those lines. However, I feel like the broadcast made this race out to be much better than it was. In practice, it’s the poster child for why so many fans despise the current rules package. The notion that the essence of these rules are going to continue next year with the Next Gen car has fans pulling their hair out.

Yes, you had some side-by-side racing around restarts, but it’s always frantic around those times because everyone needs to get what they can when everyone is close together. My second biggest fear with the Next Gen car (after the potential increase in injury risk) is that with everyone buying from the same vendors, it will be much harder to pass next year. The eight lead changes we saw Sunday could be three or four for 500 miles. The testing results from Charlotte Motor Speedway’s ROVAL last week bear that out to an extent.

I suppose NBC is happy that there were seven cautions in the final stage of Sunday’s race. That allowed the field to stay fairly close together and eliminated the potential of green flag pit stops (for the most part). It masked the issues with the package that created sub-standard on-track action.

That said, there were some tire failures Sunday, most notably with Chase Elliott. Viewers got a good shot of his tire. Others had some nasty blistering, like Austin Dillon.

This is what tire issues look like at Texas. Tough day, but proud of this #3 team for never giving up. pic.twitter.com/FRwcrg36DD

In Dillon’s case, this did not make the broadcast. Regardless, that’s ugly to look at. Not sure what caused it.

Post-race coverage was pretty much non-existent on NBC. The race ran right up to 6 p.m. ET. The feed moved over to NBCSN while Larson was doing his victory burnout. I had anticipated a situation along those lines because they would have been cutting into the news otherwise.

Once on NBCSN, viewers got a bunch of interviews from happy drivers and dejected drivers. There were also checks of the points and some post-race analysis before NBCSN left Texas to get to coverage of the Superbike World Championship from San Juan Villicum in Argentina.

The big wreck on lap 31 allowed for a number of drivers to avoid having horrific days when they had trouble late. Denny Hamlin still finished 11th despite two crashes in the final 20 laps. Chris Buescher crashed out late and still finished 21st. The aforementioned Dillon apparently had multiple tire issues along the lines of the tweeted picture above, yet still got a top 15.

Overall, I felt that NBC was in a situation where they had to make lemonade out of a lackluster race. I think they did OK in doing that. The rules and the track itself just didn’t do anyone any favors.

That’s all for this week. Next weekend, the NASCAR Cup and Xfinity Series teams will be at Kansas Speedway as the Round of 8 continues.  Expect some shenanigans, most likely on Saturday. The ARCA Menards Series wraps up its season in Kansas Friday night. Formula 1 returns for its ninth visit to Circuit of the Americas in Texas, while Stewart Friesen will likely be at Orange County Fair Speedway in Middletown, N.Y. for the Eastern States 200 on Sunday.

We will provide critiques of the Cup and Xfinity races from Kansas in next week’s edition of Couch Potato Tuesday here at Frontstretch. The Critic’s Annex will cover Saturday’s Andy’s Frozen Custard 335 for the Xfinity Series. Apparently, the sponsor’s product is good. The on-track action wasn’t shabby either.

“In Dillon’s case, this did not make the broadcast. Regardless, that’s ugly to look at. Not sure what caused it.”

How many cars had problems problem with tires? I don’t think Larson did.

Looking at the tire I’d hazard it was too much camber. Inside on Right Front (passenger) and outside on Left Front (driver).

I don’t think Dillon had the same setup as Reddick.

After listening to several laps of discussion abut the traction compound (sorry, it’s now “resin”) on the track and how the drivers were and were not using it, I switched back to football and deleted the recording I had been making of the race. They ruined Texas so that Indycar can no longer race on it, and if you’re having to resort to “traction compound,” what you are doing is not racing.

Every track is turning into Bristol except Martinsville. Run the outside groove to keep up momentum and the inside line can’t pass. If the traction compond wasn’t there the outside line would probably be useless.

The playoffs should be…

“often with nicknames for the cameramen operating them; don’t worry, the nicknames are not dirty).”

This does worry me, what shape is our country in if we’re not giving things dirty names??