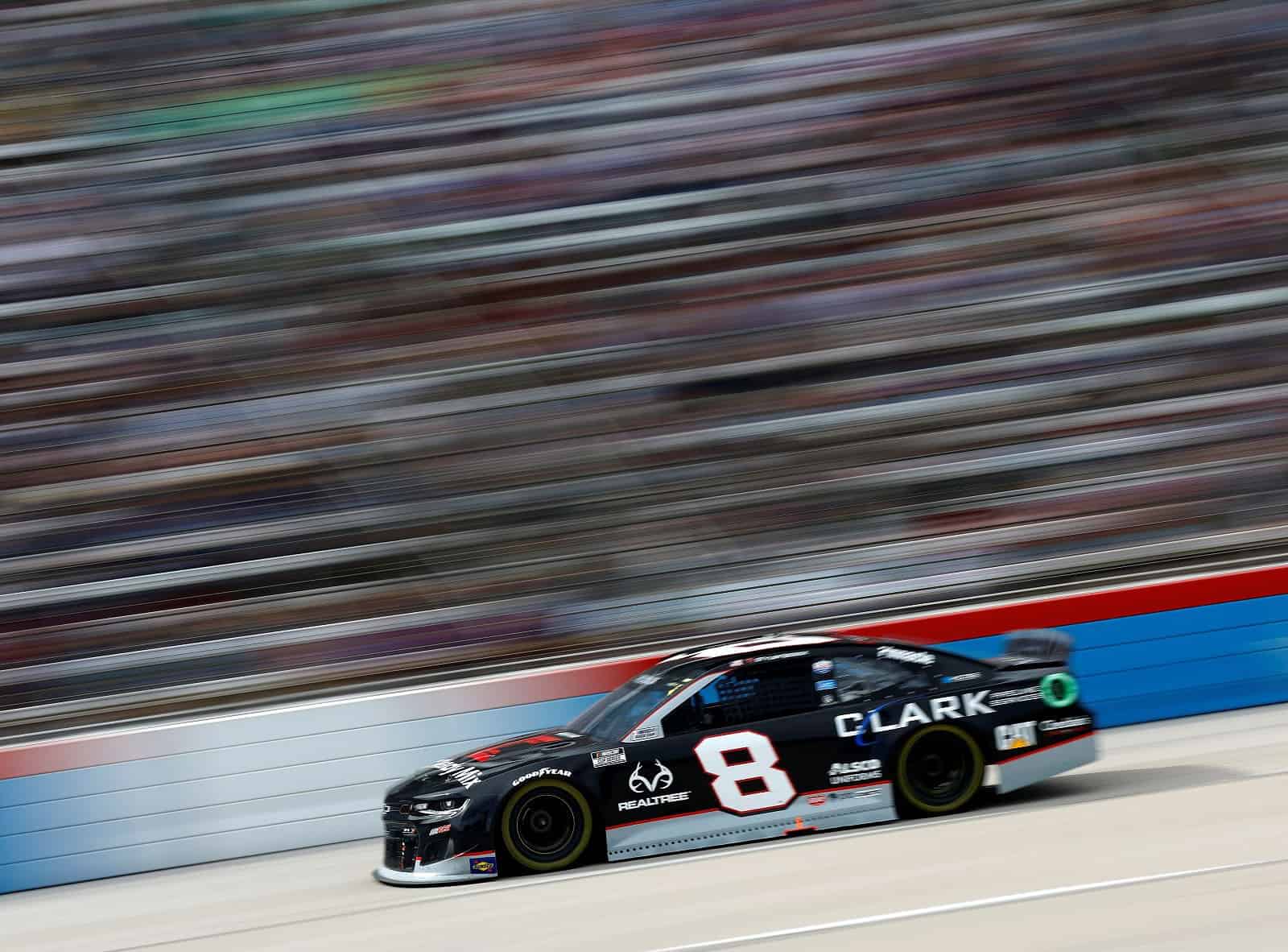 The wins just keep coming for Kyle Larson. This week at Texas Motor Speedway, Larson took his eighth victory of the year and third of the playoffs, guaranteeing that he’ll run for the championship this year while seven others will have to sweat it out for at least one more week.

Larson did what he’s done all year in Sunday’s (Oct. 17) Autotrader EchoPark Automotive 500: took a fast car to the front and didn’t look back.  He led three times for 256 of 334 laps, including the final 218. He finished third in the first stage and won the second, padding his point lead before making the situation moot with a victory.

And don’t forget: His playoff hopes might be ended for the year, but Tyler Reddick is knocking on the door of his first Cup Series win. Reddick had set sail and was gaining on Larson in the final laps. A late caution derailed that run and contact from Kevin Harvick killed his chances on the restart, but Reddick has let everyone know he’s there the last few weeks.

Following the fireworks between Chase Elliott and Harvick at Charlotte Motor Speedway’s ROVAL last weekend, there was a lot of fan talk about NASCAR playing favorites. Is Elliott the golden boy of the moment, or was he treated as any driver would be? What about drivers who antagonize him? Are they treated differently than if they tangle with someone else?

NASCAR has always had drivers they listened to more than others when it came to issues, and champions seem to have generally carried more weight. But bending rules?

Well, there are circumstances where it’s hard to say it doesn’t happen. Some drivers or teams do seem to get away with more.

However, the bigger question to ask in my opinion is whether NASCAR decisions stay consistent. Is the same rule truly being enforced every time, regardless of the driver? Generally, I feel NASCAR does that, at least when the calls are obvious.

In the end, NASCAR has to know what side their bread is buttered, and that’s where race fans put their money. If a driver is selling a ton of merchandise, increasing their popularity and running for a title, that’s good for everyone involved, from fans to executives down in Daytona Beach. Rivalries are good; popular drivers getting wrecked out of title contention is bad. NASCAR’s finger is on the pulse of their business, and sometimes the financial cost of punishing a popular driver can lead to leniency on their part.

Perception of the fan base is everything here. For example, if a driver is penalized because he’s breaking the rules more often, do people feel NASCAR is picking on him or is he getting caught more because he’s on officials’ radar screen for whatever reason? Along those same lines, did the more popular driver get away with something when NASCAR gives them a slap on the wrist or was the infraction not what viewers thought it was?

NASCAR does need to tread carefully here as the Elliott/Harvick feud continues. It’s the sanctioning body of a major sport and they need to consider precedence and consistency enforcing the rules before favoring any particular driver.

But sometimes, those decisions are going to generate questions no matter what. It’s a lose-lose for them.

Defending race winner Kyle Busch had the kind of day he needed to have in terms of his playoff hopes: a top-10 finish and points in both stages (first and 10th). He led 20 laps on the way to that stage win and wound up eighth overall to move above the cutline. Coupled with the misfortunes of both Joey Logano, whose engine expired, and teammate Martin Truex Jr., who smacked the wall late, Busch is now fourth in points with two races to decide who’s going to run for the title this year.

An unscheduled pit stop in stage two might have thrown a wrench in Elliott’s day, but he was able to recover from that after already having to climb through the field early after multiple pre-race inspection failures. He finished seventh, but the pressure is on as the reigning NASCAR champ sits fifth in points, eight points behind Kyle Busch with two races remaining to make the Championship 4.

Texas may have no limits, but the race action seemed limited compared to recent events.

This race did have its moments, but Las Vegas Motor Speedway, Texas and Kansas Speedway stand out in the playoffs because they don’t often produce the game seven moments that NASCAR hoped for when the postseason became a thing. This week’s event was about what was expected, with clean air and aerodynamic dependence dictating much of the action.

There were at least some different faces running up front late. Reddick might well have made a run at Larson if not for those late cautions, while Daniel Suarez scored a top-10 finish, both of them sporting great paint schemes to boot. While four of eight playoff contenders were involved in on-track incidents, the ending was fairly predictable.

Three 1.5-mile tracks in the playoffs are, in reality, probably representative of the season as a whole. But two in the penultimate round seems… anti-climactic. Next year, they’re a little better spaced, although the addition of Homestead-Miami Speedway in the Round of 8 means one fewer short track in the final 10 races.

Three weeks from today, it’ll all be over. The 2021 NASCAR champion will be crowned and the engines silent for a long winter until the exhibition race at L.A. Coliseum on Feb. 6, 2022.

However, there’s plenty of racing left, and one thing about this year’s playoffs is that there have been comers and goers throughout. While Hamlin and Larson have headlined, just about everyone else remaining has been in danger of elimination at some point. Many of those drivers stepped up and found ways to stave it off. The remaining spots up for grabs at Phoenix could go to almost anyone at this point. Logano’s certainly in trouble, but we’ve seen that before, and drivers have found a way through, like William Byron and Alex Bowman did in the Round of 16 before falling short last weekend at Charlotte.

This anyone’s game feel that we’ve had during the playoffs is fun. And it’s still just that with two wildly different tracks coming up: aero-dependent Kansas and bumper-masher Martinsville Speedway. If one gives, the other can take.

How … are mechanical problems good for NASCAR?

Logano’s expired engine was something that’s a rarity in NASCAR these days. That’s good for teams, but not necessarily good for racing. There should be attrition in the sport, and fans should, to varying degrees each week, be on edge about whether certain cars will hold up. Other than Logano, just one other driver failed to finish due to mechanical woes this week. It’s a race that would have had nine or 10 back around the turn of the century.

Moving forward, in the NextGen era, the sport should have more unpredictability in this area. There needs to be a possibility for engine or transmission failures, a risk that’s diminished in recent years as NASCAR has limited the gray areas within race teams can work. Mechanical issues are also the best risk the sport can have. It doesn’t carry the same ominous downside as crashing, a risk of serious injury or death. An engine blowing is a much safer option overall than smashing the outside wall in terms of changing the tone of a race.

Anything keeping fans on the edge of their seats that isn’t a giant wreck is great for NASCAR. Will a new car allow them to build back in the opportunity for mechanical misfortune next year?

Amy you are so right. Back in the day – an over used phrase I know – when a driver had a day like Larson had yesterday there was always a chance of a mechanical issue. I remember being a Bill Elliott fan and if he had a good lead, I would sit on the edge of my seat just hoping that the car held it together.

That lingering doubt of a mechanical issue in my mind added to the excitement of the race, the shadow of doubt made the win that much more satisfying in the end.

How many Daytona 500’s did Dale Earnhardt not win because of last minute issues? So when he finally won – it was so spectacular.

So yes seeing an engine detonate every once in a while I think adds to the drama.

The problem with the cars now is the nut that holds the (steering) wheel. Just like on the interstate.

Tom B
Reply to  KU

Remember, Earnhardt Sr won under a yellow flag. Who knows what would of happen if the lap last was under the green flag.

He probably would have hit a bird or cut a tire again on the backstretch and wound up ninth. Besides, I don’t think he would have let anyone pass him.

Mechanical issues are a huge reason 500 mile races are still a valid test. Failures may not be as typical these days, but they still happen and are a valid test of a team being prepared for a championship. The bug rush to shorten races has lost something along the way.

Parts failures during a races aren’t as frequent as they used to be… even the Coke 600 doesn’t have the attrition it used to. I consider that a good thing, as I hate to see a driver, even Kyle Busch, lose a race that way.