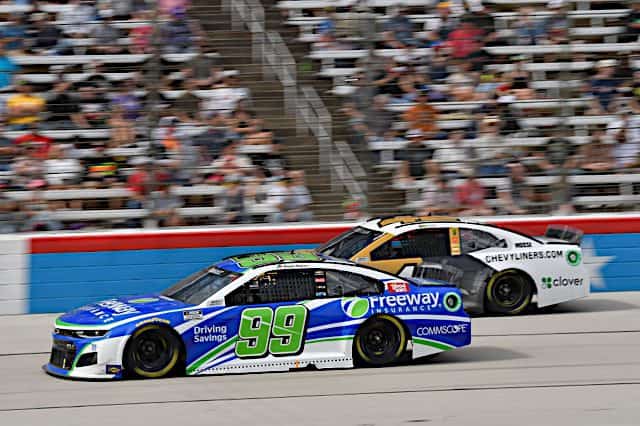 Despite being a first-year NASCAR Cup Series organization, Trackhouse Racing Team has a history of going big or going home this season. Innovative team co-owner Justin Marks has proven to take risks and use unorthodox strategies as he hits the ground running in this sport. Such an aggressive mentality worked again at the Autotrader EchoPark Automotive 500 (Oct. 17) with driver Daniel Suarez earning his first top-10 finish since Nashville Superspeedway in June.

Entering Texas Motor Speedway, it would be easy to overlook Suarez, a non-playoff driver who slumped a bit as the postseason ramped up this fall. But past Texas history provided a glimmer of hope for what he could achieve. In 2019, Suarez was driving the No. 41 car at Stewart-Haas Racing, finishing third in both Texas races that year. The rhythm that suited him during 500 miles then was on display for most of Sunday.

The 29-year-old wheelman had consistent speed all race long, running inside the top 15 for a majority of the event. It wasn’t easy, as strategy in stage one caught several drivers a lap down, including Suarez’s No. 99 Chevrolet. In spite of the setback, he still outpaced multiple drivers on powerhouse teams to put himself in the free pass position. The break needed came in stage two, a caution allowing Suarez to get back on the lead lap.

The latter stages of the race were filled with chaos, allowing the team to flex its muscles with a different pit strategy. The team chose to pit for tires in the midst of several cautions late in the race, hoping fresh rubber would allow Suarez to move quickly back through the pack.

The move led to the Monterrey, Mexico native getting caught up in some drama himself, involved in one of the race’s key moments. With just over 10 laps remaining, Suarez inched his No. 99 to the inside of playoff driver Martin Truex Jr. between turns 3 and 4. Truex appeared to come down a bit, losing the air off his left rear as he did so. Slight contact between the two sent Truex up the track, ending with a powerful hit to the wall.

There wasn’t much Suarez could do in this situation, though as you look at this replay, he held his line and appeared to have the right to the track.

“I feel so bad for [Truex],” Suarez said after the race. “I feel like I ruined the race for him, but he just can’t be doing that. I’m racing as well here. I have a lot of respect for the guys in the Playoffs. But one thing is respect, another is taking advantage of the situation. He wasn’t even close to being clear and I don’t know why he did that. We’re in the last 10 to 12 laps of the race; […] I don’t know, I think he’s just got to be a little smarter.”

Truex was non-committal when asked after the incident who was at fault.

“I was definitely running tight trying to get all we could,” Truex said, “And maybe I squeezed [Suarez], maybe he came up, I’m not sure.”

Whatever you think, this incident is what separates NASCAR from any other sport: non-playoff drivers competing with the championship contenders each week. It’s a tricky balance with both sides trying to do the best they can for their teams and sponsors.

As the race went back green, Suarez was able to shake off the contact quickly, hanging tough with the frontrunners to earn a 10th-place result. It was a persistent charge that reaped rewards in the end, producing TRT’s best result on a 1.5-mile track this season.

“It was a good day; up and down,” Suarez explained. “I feel like we probably missed it a little bit on the adjustments in the middle of the race. And then, right there at the end, during one of the stops when everyone came for tires and I was the first car without tires, I feel like we should have come for tires.

“We deserve maybe a little bit better, but we’ll have to keep working.”

The top 10 should prove vital for the team, who hadn’t seen such a result in almost four months. Suarez showed promising speed all day and the run sets him up nicely to carry momentum into the last three races.

Here’s a fun fact for the day: who had the best average finish at Texas entering Sunday’s event? If you guessed Erik Jones, you would be correct. It just goes to show how much the situation has changed for a young driver once connected to one of the sport’s top teams. After three years in powerhouse Joe Gibbs Racing equipment, Jones is fighting for everything he can with lesser-funded Richard Petty Motorsports.

Jones has done a stellar job with the ride this year and once again showed his talent at Texas. The Byron, Mich. native brought home a 12th-place finish, avoiding crashes and moving forward throughout the afternoon. The No. 43 earned valuable television time throughout the race, fighting through a tough start where he was caught two laps down in stage one. However, Jones recovered, getting back on the lead lap after a flurry of cautions near the end provided a free pass opportunity. The 25-year-old was able to use fresh tires to gain crucial spots on restarts, earning a top-15 finish that was better than two of his Fort Worth results with JGR.

“Up and down day […],” Jones said after the race. “Finally got back on the lead lap at the end and got a top 15. Proud of the effort to stay in it all day as a team. Hope to take what we learned to Kansas [Speedway] and improve on it.”

Earlier this year, Front Row Motorsports crew chief Drew Blickensderfer explained in an interview how he felt the team had taken a step forward on intermediate tracks. Blickensderfer’s driver, Michael McDowell, seemed to have more speed on them this season to back that statement up. However, the finishes have not necessarily reflected better performance. Sunday was different as the Phoenix, Ariz. native finished in 17th.

McDowell kept his car clean throughout the race, and despite being caught a lap down and getting caught in a multi-car pileup early on, he turned in a solid performance. McDowell joined drivers such as Suarez and Jones in flirting with the top 10, a Texas race where underdogs had a little extra pep in their step. After a rough stretch over the entirety of the summer, McDowell now has finished 17th, 16th and 17th in the past three races.

On the flip side of all the strong runs came those who got caught up in the mayhem. On a lap 31 restart, Bubba Wallace lost grip under Kurt Busch in turn 2, sending his No. 23 Toyota for a spin. The ensuing effects created a parking lot on the backstretch, ending the day for several underdogs. Wallace, Ryan Preece, McDowell, Anthony Alfredo, Cody Ware, Josh Bilicki, Joey Gase and Justin Haley were among those caught up in a 16-car crash, the most collected in a single incident in TMS history.

“Just an embarrassment on my part,” Wallace said after the incident. “Just trying to get clean air, went to the middle and I was like ‘this isn’t good.’ I backed out, and by the time I backed out, it was already around. Sorry to everyone that came here to cheer on the No. 23 car. I let everybody down. I let my team down. Apologize to them.”

Alfredo also suffered a scary crash with 30 laps to go. The rookie lifted as cars were attempting to avoid a sliding Chris Buescher on the restart. Buescher was able to save it, but Alfredo was hit from behind by fellow freshman Chase Briscoe. Alfredo’s No. 38 backed into the wall hard, trailing oil as he slid down the track.

Despite the resulting inferno, Alfredo was thankfully OK.

Wallace and 23XI Racing had Colombia on the car once again at Texas. The team brought some heat in the form of their paint scheme, with this version once again cashing in as the top underdog scheme this week. Unfortunately, fans could only see it for 30 laps before that giant crash ended his day.

The Round of 8 of the NASCAR playoffs is in full swing as both the NASCAR Cup and Xfinity series move on to another 1.5-mile track, Kansas Speedway. The NASCAR Camping World Truck Series gets one more week to prepare before they head to “the paperclip” of Martinsville Speedway for their penultimate race of the year.

Daniel Suarez paced the underdogs at Kansas in May, posting an 11th-place result. Michael McDowell was just behind him, running 13th.

The Xfinity Series will make their first trip to Kansas in 2021. However, the last race there produced a top 10 filled with underdogs. Austin Hill finished fifth, Josh Williams came in sixth while Brett Moffitt followed them in seventh.

Talk about a great first ride for @Freeway_Ins ?@Daniel_SuarezG and the entire team kept digging all 500 miles, bringing it home 10th! pic.twitter.com/Zwg6rNot5Q

Thank you to our friends at @LovesTravelStop, @SpeedcoPM and @speedycash for coming on board with us today in the Lone Star State! ⭐️ pic.twitter.com/zbMso3DcX0

THE BIG ONE at Texas!

Anthony Alfredo was able to climb out of the car after this crash and fire.#NASCAR
Watch on @NBC or @PeacockTV: https://t.co/7NW8hhZFP9 pic.twitter.com/M1L7QK3e87

“Underdog” Bubba (and his team) should have received a reality check from that event but I don’t think his ego will allow it.

I watched replay of Suarez/Truex over and over and I don’t see where he touched MTJ. It was close, but Truex started to turn as Suarez came up to his bumper. I think it was the air on the corner of the car.