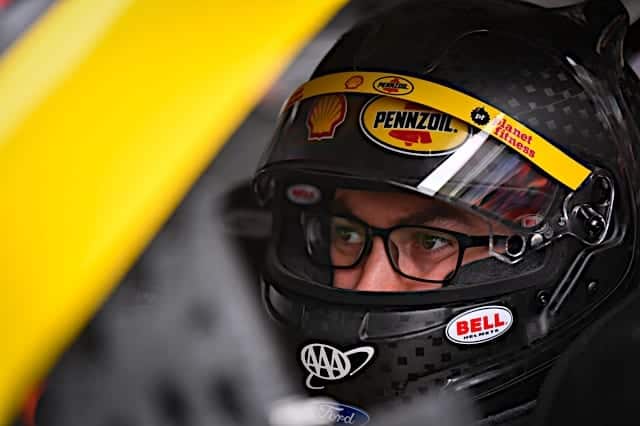 On a day at Texas Motor Speedway when most NASCAR playoff drivers avoided serious trouble, Joey Logano and Martin Truex Jr. were not so lucky.  Both drivers looked to be on their way to top-10 finishes but dropped out of the race in the last 50 miles.  Logano’s engine failed on lap 300, relegating him to a 30th-place finish.  Truex wound up 25th after a hard crash in turn 4, resulting from contact with Daniel Suarez.  The road to a potential second championship for both racers just got much more difficult.

With two races left in the NASCAR Cup Series Round of 8, Truex and Logano fell to seventh and eighth in the playoff grid, respectively.  Truex faces a deficit of 22 points to the cutline while Logano is 43 points below.  Those might seem like insurmountable holes, especially with just two races to make up the gap.

However, before you write Truex and Logano out of the championship conversation, take a moment to consider the big picture. It is important to consider their past success in the playoffs, along with the races still to come in this year’s postseason.

There are a handful of drivers in the Cup Series who have proven to be exceptionally good at managing the elimination style postseason.  Both Truex and Logano are undoubtedly in that group.  In eight seasons of the 16-driver Cup Series playoff format, Logano and Truex have qualified seven times each.  Logano has advanced to at least the Round of 8 in all seven playoff appearances, while Truex has been to this round six times.  Both drivers have participated in the Championship 4 a total of four times, each coming away with one championship.

Along the way, Logano has collected 10 wins during the playoffs with Truex winning nine playoff races of his own.  These are two drivers who you simply cannot count out of the title picture until they are officially eliminated.

The real question is not if Logano and Truex can get back in contention, but how?  What strategies should either driver try to employ at Kansas Speedway and Martinsville Speedway?  Are points a realistic option for the Nos. 19 and 22, or have they fallen to must-win territory?

For Logano, the answer to the last question is simple: only victory lane matters now.  He may not be in a mathematical must-win situation, but the only way he could advance on points is if additional playoff drivers have disastrous finishes in the next two weeks.  That outcome is pretty unlikely considering the strength of competition and the reality that only one or two drivers will probably be able to advance to the championship race on points.  The No. 22 team needs a win in order to keep its title hopes alive.

The good news for Logano is that he is no stranger to winning at Kansas or Martinsville.  He has three victories at Kansas, all in playoff races, knowing how to peak at the right time.

The most recent at Kansas was just last year, when Logano took the lead late and held off a furious charge from Kevin Harvick to score the win.  Repeating that performance could be difficult; last year’s triumph is Logano’s only top-10 finish at Kansas in his last five starts there.  Additionally, the intermediate tracks and the 550-horsepower packages have been weak spots for Team Penske most of the season.  Perhaps Logano’s blown motor was a result of Roush-Yates engines trying to wring a little more horsepower out to make up for it.

Martinsville could be a better bet for the No. 22 team.  Logano has placed in the top 10 in eight of his last 10 starts there, including a win in 2018 where he battled with Truex all the way to the final lap.  It was another playoff victory that guaranteed Logano passage to the Championship 4 finale, a race where he ultimately took home both the checkered flag and Cup title.  If Logano is within sight of victory at Martinsville in two weeks, expect him to fight hard for the win.  His championship hopes will likely depend on it.

Turning to Truex, he and the No. 19 team have a few more options for advancement.  Truex is close enough to the cutline that stage points could make a big difference for his title hopes.  A good points day at Kansas, especially coupled with a win by either Kyle Larson or a non-playoff driver, would put Truex within striking distance of a transfer spot.

While Truex has not won at Kansas since sweeping the two races in 2017, he has finished in the top 10 in eight of his last nine starts there.  In those nine races, he has earned an average of 6.4 stage points per event.  Chances are that Truex will need to do a little better than that to make up ground, especially after scoring no stage points at Texas.

Yet if things don’t go well at Kansas, Martinsville could rescue Truex’s season.  Early in his career, he typically struggled at the Virginia short track.  Even after earning a championship and lots of success with Furniture Row Racing, Truex’s lack of wins on short tracks remained a favorite talking point of the media.  But that all changed in 2019 when Truex joined Joe Gibbs Racing and earned his first short track wins at Richmond and Martinsville.

Since then, Truex has been the driver to beat at Martinsville, winning three of the last four races there.  Six of his eight top fives at the track have come in the last eight events.  The only recent blemish was last year’s Martinsville playoff race, when Truex had to pit under green with 25 laps to go for a loose wheel.  Forced to pit road, the No. 19 surrendered a top five and any chance of advancing to the championship.  Even so, Truex led 129 laps in that race and was a serious threat to win until the closing laps.

Ultimately, the Round of 8 does provide legitimate opportunities for Truex and Logano to make up the ground they lost at Texas.  Both drivers have a proven record of success in the playoffs and have been tough competitors over the years, even to each other.

Back in 2018, when Logano bumped Truex at Martinsville, Truex was displeased with how Logano raced him in the closing laps.  The then-reigning champ declared that even though Logano won the battle, “he ain’t winning the damn war.”

Of course, Logano ultimately did win the title that year, defeating Truex in the championship race.  Three years later, with both drivers needing good results to stay in the battle, do not be surprised if the “damn war” gets reignited.