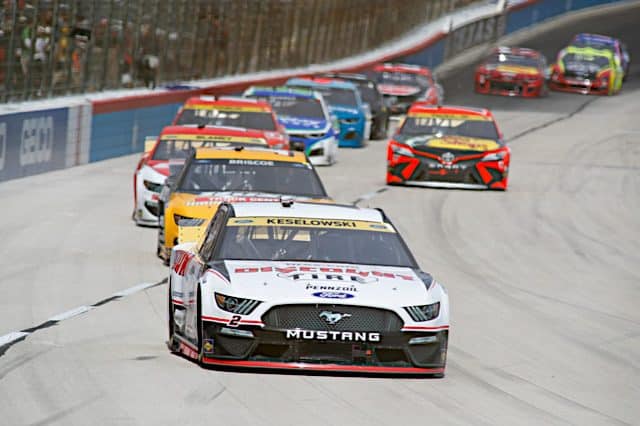 On Oct. 10 at the Charlotte Motor Speedway ROVAL, Brad Keselowski was on the brink of elimination.

His competitors were doing him no favors. The No. 2 Ford was sent spinning multiple times around the part-oval, part-road-course. And with no significant playoff points to carry him through the postseason, there were multiple points were it seemed a member of the Championship 4 just one season ago would be sent home in the Round of 12 without a shot at the 2021 title.

The chaos of the day saw Keselowski, the 2012 NASCAR Cup Series champion, finish 20th with nothing outstanding from the day — despite, perhaps, the smoke shows he offered when he spun out.

But suddenly, it seems that Engine No. 2 is the little engine that could.

Keselowski has mastered the playoff mindset, which really comes down to one word: survive.

He rode that survival to a final four berth last year, and that same resilience is proving to be his saving grace yet again as he rides into the sunset at Team Penske.

Earning a fourth-place finish in the opening race of the Round of 8 Sunday (Oct. 17) at Texas Motor Speedway was undoubtedly Keselowski’s best showing of the playoffs.

Sure, he finished second at Talladega Superspeedway on Oct. 4, the site of his only win this season way back in April, but superspeedway racing is such an anomaly that nothing translates from those performances to the rest of the season.

That’s what made Keselowski’s run at Texas that much more impressive. With stage finishes of 10th and fifth, the No. 2 Ford was a factor all race long and capitalized on the many long runs Texas has become known for.

Late in the race, Keselowski appeared to be the only driver able to contend with the Hendrick Motorsports contingent of Kyle Larson and William Byron, settling into battles with Tyler Reddick, Kevin Harvick and Kyle Busch at the back end of the top five.

On the final restart of the day, which proved to be a natural green-white-checkered, Keselowski was fighting for second before getting edged at the line by both Byron and Christopher Bell.

It was the kind of performance that can launch Keselowski from his relative underdog status to a championship contender yet again.

“We had the car balanced really well with the Discount Tire Ford on the long runs,” Keselowski said. “The last few times we have been here you get 40- or 50- or 100-lap runs at the end but today, geez, we didn’t run more than two laps at a time for the last 45 or 50 laps. That is just not what we needed. We needed the long runs to be able to keep them honest.

“We had long run speed but the [Nos.] 5 and 24 were just blistering fast on the restart and drove away from me. I just wanted some laps to let their stuff wear down.”

Even if he couldn’t catch Hendrick Motorsports on Sunday, the showing has to be encouraging knowing that Kansas Speedway, another smooth mile-and-a-half, sits ahead as the next track on the schedule.

Keselowski’s playoff results hadn’t been terrible, but they weren’t exactly electric either. Aside from his runner-up finish at Talladega, his best three finishes were a sixth-place result at Bristol Motor Speedway and seventh-place efforts at both Darlington Raceway and Las Vegas Motor Speedway.

Now, momentum appears to be on his team’s side, if only momentarily. What his team does this coming weekend at Kansas will almost certainly dictate his playoff fate, barring a win at Martinsville Speedway on Oct. 31.

The most significant hurdle Keselowski and Co. will have to leap, though, remains his lack of playoff points. With no extra cushion, Keselowski has to remain on attack mode from here on out.

What’s more troubling is he gained just one point on the cutoff line at Texas despite picking up an additional seven stage points and remains 15 points outside of advancing.

Again, survival is the theme in these playoffs. Keselowski is 1-for-1 with crew chief Jeremy Bullins atop the pit box in getting to the Championship 4, heading into Phoenix Raceway with a chance for title No. 2. So it should come as no surprise that he remains optimistic heading into Kansas.

“We gained a point, but we moved up from eighth to sixth [in points] so that is a nice little win for us and gives us a better pit stall for next week,” Keselowski said. “If we can keep running like that and scoring high 30s or low 40s in points, then I think we will transfer in.”

It’s a daunting goal but not impossible by any means whatsoever. While Larson is locked in and Ryan Blaney sits P2, 17 points ahead of the cut line, Denny Hamlin is only nine points to the good, while Busch, his Joe Gibbs Racing teammate, is in by eight points over Chase Elliott.

Then comes Keselowski, who sits seven points ahead of Martin Truex Jr. and 28 ahead of his Team Penske teammate Joey Logano, whose blown motor at Texas instantly puts him into must-win mode.

Keselowski is one of the most methodical drivers in the field, but he’s flown under the radar nearly all season. This playoff format allows drivers to show up when it matters most.

Perhaps Keselowski is finding a way to master his timing en route to a second championship.

Like Rusty Wallace in the #2 car before him, Brad will be known for his consistency, both as a winner, and as a championship contender. I’m not sure he can dig himself out of the hole he’s in, but he sure had a fast car at Texas.