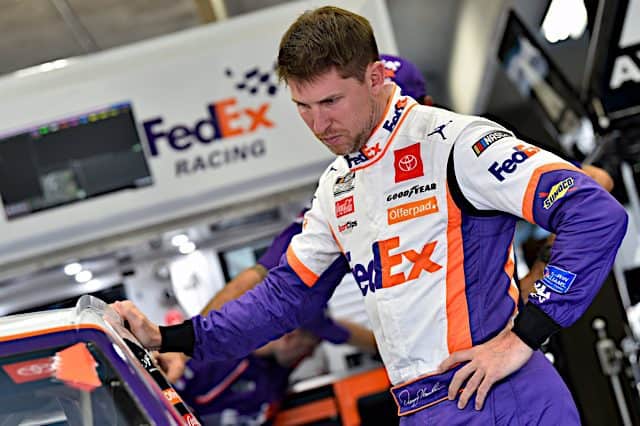 We’ve seen it time and again: Denny Hamlin makes the playoffs only to fall flat in the season’s most critical moments.

But fast forward to the 2021 season and we’ve seen the No. 11 team strike first in the Round of 16 and the Round of 12, winning at Darlington Raceway and Bristol Motor Speedway in the opening race of each round to secure his spot in the next. At Texas Motor Speedway, though, he didn’t show the same kind of speed or dominance that he did in the first two rounds. Leading just two laps during a round of green flag pit stops toward the end of stage one, Hamlin limped home 11th.

On the surface, an 11th-place finish isn’t something to write home about, and the No. 11 team certainly doesn’t sit in a comfortable position. Hamlin is currently third in the standings but has a slim nine-point advantage over fifth-place Chase Elliott.

“I think we went a different direction with our car and we weren’t just as fast as we were in previous mile-and-a-half races. I thought we were kind of a third-to-fourth place car on the long run, seventh-to-eighth on the short run. Just weren’t ourselves today in that case, and then obviously getting in two wrecks at the end didn’t help, but the fact that there was a lot of attrition and the fact that the team did a phenomenal job fixing the car got us back up to P-11.”

The good news for Hamlin, though? He’s run a strong playoffs so far, finishing outside the top 10 just once, and that was the 11th at Texas. But the story the numbers don’t tell about that result is what the No. 11 team needed to recover from along the way.

Could that rebound after a pair of incidents be the difference-maker when it comes to moving forward to the championship race (assuming he does qualify for the Championship 4)? It’s certainly looking like Hamlin is making the case that he can and will produce the results he needs in a high-pressure situation after not being able to for so long.

2. Why exactly are we using a 550 hp engine package next season?

Is it any real surprise to Kyle Larson took the 550 hp engine package and dominated, leading 256 of 334 laps at Texas, including the final 218? It’s nothing new with this particular aero package and is something fans and drivers have both criticized.

Well, Sunday at Texas was no different.

“Every time you run somebody down, they accordion you backward,” Kyle Busch said when asked about those comments after the race. “It’s terrible. It’s a joke. But sign me up for more, I guess.”

Thankfully, this weekend’s Hollywood Casino at Kansas Speedway marks the final race this season NASCAR will use the 550 hp package. The bad news, though? It’s coming back …

And that is the big question. NASCAR is banking on feedback from manufacturers that consideration to coming could depend on horsepower. But no guarantees. I understand philosophy but so far no results makes it frustrating. I'd prefer more horsepower. https://t.co/UucaOQUlUl

Maybe the sanctioning body is banking on it working differently with the Next Gen cars? One can only hope.

3. Keep an eye on Team Penske over the next couple of weeks

After a blown engine at Texas, Joey Logano is essentially in a must-win situation to keep his championship hopes alive. I mean, mathematically, he’s still eligible to point his way into the Championship 4, but let’s be real here. You’re not going to see major mistakes from more than half of the playoff field over the next two races that will make it possible for Logano to get a spot in the top four on points. Instead, to overcome that, he’ll need a win at Kansas or Martinsville Speedway over the next two races.

The good news for Logano is he’s the defending winner of the fall race at Kansas, but the bad news is his team hasn’t shown the kind of speed needed to race for a championship, especially in recent weeks, having led just 13 laps this entire playoffs. So unless the No. 22 team can pull something out of its hat to give Logano what he needs to wheel his way through the field, the Round of 8 isn’t going to end the way he wants it to.

Meanwhile, Ryan Blaney sits second in points, albeit a not so comfortable 17 points ahead of Chase Elliott in fifth. But there’s been a different air of confidence emanating from the three-time winner this season. Running what’s been his best Cup Series season to date, he’s had some decent speed on the intermediate tracks this season, though Kansas isn’t one of his best tracks. In fact, he’s finished inside the top 20 just once over his last five races at the mile-and-a-half oval (seventh last fall).

But the Penske driver I’m not sure anyone is paying a ton of attention to is Brad Keselowski. He was one of the few that showed the kind of speed needed to keep up with Larson on the flurry of late-race restarts at Texas, and he’s quietly put together a decent playoff run. In fact, he’s finished inside the top 15 in all of the playoff races but the Charlotte Motor Speedway ROVAL last weekend. That doesn’t sound terribly impressive until you look at the his finishes of 35th, 24th, ninth and 33rd in the final four races of the regular season.

With all of that said, I’m not convinced any of the trio of Penske drivers has run a strong enough season to be a true championship contender, even considering their most recent performance. But we all know that all they need to do to keep their title hopes alive is to make it into the Championship 4, where anything can happen.

4. Don’t expect the No. 5 team to relax over the next two races

After another dominant victory, this time at Texas, it was Larson who struck first and put himself into the Championship 4, giving the No. 5 team the advantage of having the next two weeks to take it easy and prepare for Phoenix, right?

Well, yes and no.

“I think part of what helps the Phoenix focus is just the timing of the schedule,” Larson’s crew chief Cliff Daniels said after the victory. “Since it’s a Friday, Saturday, Sunday show, the truck is going to leave like Tuesday of that week, and the way these race formats go, our hauler didn’t leave until Friday morning this week, so you’re just going to have two less days that week.

“So now we are very fortunate that we have a little bit more time just to really plan out the way the next three weeks can go with emphasis on Phoenix.”

There’s that advantage in getting ready for the championship race. But at the same time, Daniels has also made it clear that “changing anything from our perspective now would be a mistake.”

“We’ve had a very common mindset every race throughout the year,” Daniels continued. “It’s what’s got us to this point, so even though we’re locked in, I’m sure my team is going to get a little grumpy at me on Tuesday because I’m going to walk in and tell them we have to win Kansas. That’s just the mentality that we’ve had all year, so we’ll keep it going.”

And at this point, anything short of winning the championship would be a disappointment for Larson and the No. 5 team. With eight wins, 18 top fives, 24 top 10s and a whopping 2,267 laps led — and still three races to go — it’s without a doubt the best of his career with or without the title.

But the whole season will just feel incomplete without hoisting the championship trophy in a few weeks at Phoenix.

Chase Elliott was one of six drivers forced to give up his sixth-place starting position and start at the rear of the field after multiple inspection failures Sunday morning at Texas. But by the time the competition caution flew, he’d already raced his way through the field to eighth, rendering the penalty essentially pointless.

It’s not the first time we’ve seen a pre-race “penalty” that put a driver at the back of the field only to see them make quick work of moving through the field, and it’s likely not to the be the last, either. But as long as the damage is minimal, teams will continue to push the envelope and use multiple attempts to make it through pre-race inspection, knowing the consequences don’t have much affect.

The sanctioning body needs to find a way to put its foot down if it wants the teams to stop using the gray area of the rule book.

Championship form? Yeah, if you consider caressing the side of each car he tries to pass as his form.

Yes, na$car is salivating thinking about the big Jordan/Hamlin/ minority scene as the champion. I would not be surprised if the tech inspection was very lenient on the 11 car. Anybody that can think knows they can “adjust” as needed. It happens.