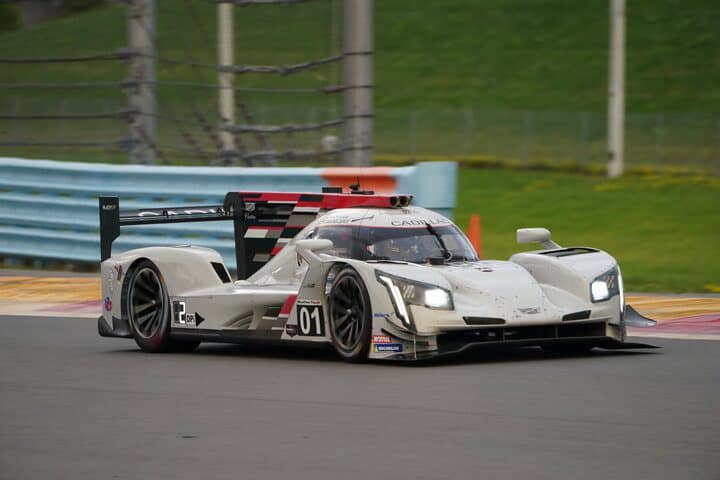 Chip Ganassi Racing announced Tuesday (Oct. 19) that they will be doubling down on their commitment to the IMSA WeatherTech SportsCar Championship in 2022.  The team will be expanding to two full-time Cadillac DPi-V.R.s next season.

Renger van der Zande will stay with the team for a second full season.  He’ll be joined by three new teammates.  They are Sebastien Bourdais, Earl Bamber and Alex Lynn.  The individual driver pairings were not announced, nor was the number for the second car.  Given Ganassi’s history with the Daytona Prototypes (fielded from 2004-2016), the likely number choice for the new car will be No. 02.

Van der Zande is very happy to be back with the organization for another year.

“It is great news to have Sebastien, Alex, and Earl as new teammates,” van der Zande said in a press release.  “They are all high-class, proven race car drivers.  I think they will be a good fit with the team.  Sebastien has done everything in the world, he has a lot of raw speed.  I know Earl very well from our junior series and he’s an LMP1 overall winner.  Alex comes to us from Formula E and has a lot of sports car experience.  I feel great about coming back with the Chip Ganassi Racing team.  I feel more at home than ever with them.  They put a lot of responsibility on everyone.  Chip and Mike Hull run a great operation, that is why they have been successful.”

Of the new drivers to the team, only Bourdais has raced the Cadillac DPi-V.R. this year.  The INDYCAR veteran has served as JDC-Miller MotorSports’ third driver in the No. 5 Cadillac sponsored by Mustang Sampling.  Bourdais led the team to victory in the Mobil 1 12 Hours of Sebring back in March despite a rear wing that was trying to fall off of the car in the closing laps.

Bourdais’ primary ride in 2021 was the No. 14 ROKIT-sponsored entry for A.J. Foyt Enterprises in the NTT IndyCar Series.  Bourdais struggled for a chunk of the year, earning two fifth-place finishes (Barber Park and Gateway) for his best runs of the year.  Bourdais ended up 16th in points.

“I’m super excited to reunite with Chip Ganassi Racing,” Bourdais stated.  “We have had our fair share of successes in the past and I can’t wait to start working with the drivers like Renger, Earl and Alex.  This is obviously a bit of a turning point in my career, that will see me transitioning most of my attention to sports car racing, but I remain in the GM family.  I can’t thank everyone involved enough for their trust and continued support.  I am convinced Cadillac, Chip, Mike [Hull], [team manager Steve Eriksen], and the entire team will give us all the tools we need to drive our cars to victory lane.  Bring on 2022!”

Lynn comes to Chip Ganassi Racing after spending this year racing in the ABB FIA Formula E World Championship for Mahindra Racing.  In 15 races, Lynn won the second London e-Prix event and scored third-place finishes in the first London e-Prix and the second race at Valencia.  An energy overuse disqualification in the first race at Valencia took away a fourth-place finish.  Lynn ultimately ended up 12th in points.

In sports cars, Lynn, 28, has years of experience in both prototypes and GT cars.  Lynn was a factory driver for Aston Martin Racing in the FIA World Endurance Championship for two seasons (2018-19 and 2019-20).  Due to the COVID-19 pandemic, this meant that he was with the team for roughly 2.5 years.  In that time, Lynn scored two GTE-Pro class victories, including the 2020 24 Hours of Le Mans.  He also had five podium finishes in 15 starts.

In the IMSA WeatherTech SportsCar Championship, Lynn’s experience is much more limited, but quite appropriate.  In 2017, he signed with Wayne Taylor Racing to serve as their third driver for the final three endurance races of the year.

It didn’t work out that way.  Ultimately, Jordan and Ricky Taylor ran the Sahlen’s Six Hours at the Glen as a twosome while Ryan Hunter-Reay returned to the team for the Motul Petit Le Mans.

As a result, Lynn has one career IMSA start, but it was a successful one.  It was in the 2017 Mobil 1 12 Hours of Sebring for Wayne Taylor Racing when the team was fielding a Cadillac.  Lynn, along with the Taylor, ended up taking the overall win.  While they were running a larger engine at time (6.2 liters, as opposed to the current 5.5 liter powerplant), his experience should still be relevant.

Bamber is the unknown in this equation since he is the only one of the four drivers announced that has never raced a DPi car.  However, Bamber does have top-flite prototype experience.  In 2017, Bamber drove full-time in the WEC for Porsche’s factory team in the Porsche 919 Hybrid.  Sharing his car with Timo Bernhard and Brendon Hartley, Bamber won four races and the World Championship.  He is a two-time overall winner at the 24 Hours of Le Mans (2015 and 2017).

More recently, Bamber has raced in the IMSA WeatherTech SportsCar Championship, primarily in the GT Le Mans for Porsche GT Team (run by CORE autosport).  Bamber has six career class victories in the GTLM class and won the class championship with Laurens Vanthoor in 2019.  With Porsche dropping their factory team for this season, Bamber was planning on racing full-time in the GT Daytona class this year in the No. 99 Porsche for what was then known as Team Hardpoint/EBM alongside Rob Ferriol.  Due to sponsorship issues, this partnership ended after Sebring.  The partnership between Bamber’s team and Hardpoint Motorsports has since been severed completely.

Van der Zande and 2021 teammate Kevin Magnussen are currently fourth in the DPi point standings with a victory at Detroit back in June.  They are currently three points out of third.

No additional drivers were announced for the four Michelin Endurance Cup events.  Those drivers will be announced at a later date.