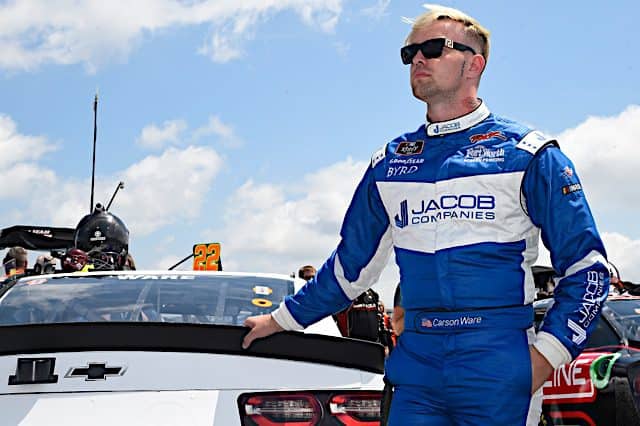 The arrest of Ware, 21, was for misdemeanor charges of assault on a female, simple assault and injury to personal property. The arrest happened in Salisbury, N.C., at 3:12 a.m.

“This morning, we became aware of a situation that involved Carson Ware,” SS Green Light said in a release. “Upon further information, we have indefinitely suspended Carson Ware as a driver at SS Green Light Racing. We are taking this matter very seriously and will continue to monitor the situation as the facts come to life.”

“This morning, I was notified of a situation that involved Carson Ware. At this time, Carson has been indefinitely suspended by SS Green Light Racing and NASCAR,” Rick Ware Racing said in a team release. “While I am frustrated by the actions of Carson, I am even more disappointed for [SS Green Light owner] Bobby Dotter and his entire team.

“Bobby has been a great ally through the years, and I hate to see SS Green Light Racing under scrutiny due to actions that do not reflect the reputation and image that Bobby has worked hard to uphold over the years. My hope is that Carson will get the help that he needs during this difficult time.”

Here we go again, guilty before your day in court. A misdemeanor and $1000 bail. That’s like a very fast speeding ticket.