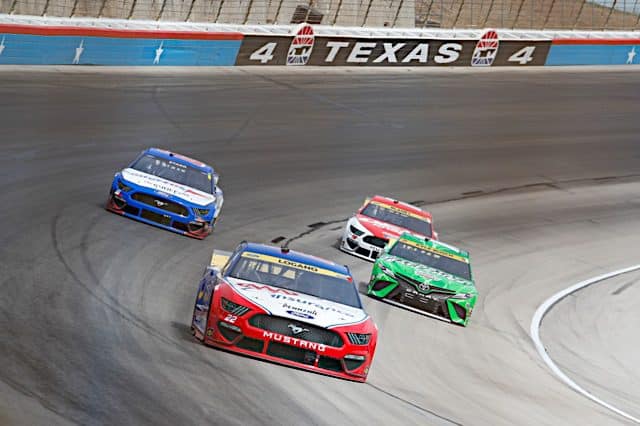 Sunday’s race was a snoozefest. Can we take Texas off the schedule already? – Patty K., Sedona, Ariz.

With no disrespect to the fine folks at TMS … I wish we could.

Ever since the repave and reconfiguration, Texas has been downright horrible. In the NASCAR Cup Series specifically, it’s been wide open all the way around, one dominant lane, little passing and no real tire wear. Some of it falls on Goodyear, some of it falls on the sanctioning body for the package presented, but the buck stops with the track itself.

There are plenty other intermediate tracks that put on better racing than Texas. Kansas Speedway this upcoming week for one, Las Vegas Motor Speedway (despite getting the west rating in The Athletic’s Jeff Gluck’s “Was It A Good Race?” poll earlier these playoffs). Atlant– nope, that’s getting reconfigured too, oh well. Charlotte Motor Speedway is … fine?

Okay, so maybe there aren’t as many 1.5-mile tracks that put on great racing nowadays in NASCAR … and maybe that blame can actually be placed on the package rather than the venues themselves?

I was entertained watching the final 50 or so laps from Texas on Sunday (Oct. 17). But that was because of the drama with playoff contenders, not the actual racing on track. That’s not necessarily a bad thing, but I would assume it’s preferable for all parties involved for the product to be a compelling parallel to the storylines that come along with it.

As NASCAR President Steve Phelps alluded to last week, tracks being removed from the schedule entirely is not off the table moving forward to 2023 and beyond.

It seems NASCAR is also listening to fans more than it ever has (for better and for worse). Could that mean removing a date at TMS in favor of Circuit of the Americas and another date elsewhere in the state?

Or as spotter Brett Griffin alluded to on Dirty Mo Media’s Door Bumper Clear this week, the property value of TMS is skyrocketing similar to that of Kansas Speedway and Chicagoland Speedway. Would it be possible for the land to be sold to another party entirely, SMI takes their lump some of cash, presumably invests it at other properties *cough Nashville Fairgrounds Speedway and/or North Wilkesboro Speedway cough* to add #MoreShortTracks and remove a stale intermediate from their arsenal?

It’s possible. Not a certainty or even probability, but if the racing stays this stale at Texas, the end could be be near.

Regardless of if he wins the championship or not, is this season one of the best in modern history from Kyle Larson? – William S., Winnipeg, Canada

As Jeff Gluck pointed out on Reddit, Kyle Larson has led 100 or more laps nine separate times this season, putting him inside the top five for single-season laps led with three races to go in the 2021 season.

Kyle Larson has now led more than 100 laps today, doing so for the ninth time this season. Per this Reddit post from earlier this year, he'll rank at least No. 5 in single-season laps led after today. https://t.co/1R35RwlY5S

Would you bet against Larson to not win at Kansas, Martinsville Speedway or Phoenix Raceway? I wouldn’t. He’s tallied career-high marks in almost all statistical categories in his first season racing with legitimate title-contending equipment.

But let’s not totally ignore Denny Hamlin here, either. Despite only winning twice thus far to his seven victories last season, he’s on pace for career-bests in top fives, top 10s, average finish, laps led and races running at the finish, having already surpassed his career highs in some of those categories.

Larson’s eight wins to Hamlin’s two have him not only locked into Phoenix, but would have had him sitting prettier than the No. 11 should Larson not have won at Texas. Playoff points mean a lot, yes. But consistency is in fact not dead in this playoff format.

Entering Kansas, Hamlin and Larson would be tied with the old season-long points format. Why does that matter, you may be asking? Well … it doesn’t. NASCAR isn’t ditching the playoffs in favor of the season-long battle. Not now, not in the next decade, probably not ever.

But it does show that consistency still matters. And it can be rewarded. Hamlin doesn’t have his spot locked in for Phoenix. But getting this far shows that top-fiving you to death still could work.

When it comes to the Championship 4 race itself, though, Hamlin may have to put his FedEx suit on and deliver, as every driver since the introduction of this format (2014-present) has won the finale and title.

First off, I’m not a Texan. But given the huge building boom in the area in and around the track, and its pretty good crowd this weekend, Nascar would be crazy to move out of metro Dallas to go to Portland or Canada or NYC. Plow it under and build a different track, maybe, but leave, no. Having 2 horsepower levels and 2 aero packages is an expensive solution to the problem in an era where Nascar appears to have constant cost concerns. Having everybody close on the track, but unable to pass is a show, not a race.

You PASS in a race because you are fastest and have skill, not because of who is building condos in Austin. As I posted earlier, passing sucked in the 90s. It was the same thing as today, hectic restarts, aero push, etc. NASCAR should and needs to go back to the formula they had when fans watched, but of course, there will always be naysayers and negative articles–just now, with the kiddy generation and there constant cellphone use, the reading of negativity is prevalent versus finding a bad article on a random Monday. Less sensationalism and more building and better coverage on the cable networks.

I agree that Tex-ass wouldn’t be missed if removed from the schedule, but perhaps for the interim they could remove it from the playoffs and place it into a nondescript, insignificant portion of the schedule–maybe mid to late April? It’s old Playoff spot would go to the 2nd Atlanta date currently ran in early July(?!)…just a thought.

Nascar needs to leave tms on the schedule.its a super fast track an puts on a 500 mile race which is great but rare these days if people want better races nascar need to look in the mirror give the teams there horsepower back.an if the drivers don’t like or fear the speed let them go to a slower series.they also need to loose the 10in spoilers in the back an let the greatest in the world race