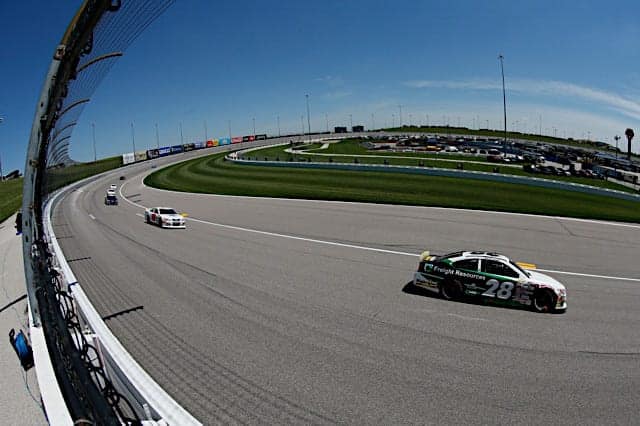 One more race remains for Ty Gibbs to clinch the 2021 ARCA Menards Series championship. All Gibbs must do to win it is start the Reese’s 150 at Kansas Speedway. So what storylines are there other than Gibbs’ inevitable title in the season finale?

Gibbs has won 10 times this season, accrued the most laps led and pole awards. His success has vaulted him up the ARCA all-time rankings. He is tied for 14th most victories and already has led the third-most laps in ARCA history. It has been a dream season for Gibbs, including winning three times in a part-time NASCAR Xfinity Series campaign.

Earlier this season, Gibbs led all 100 laps to capture the victory in the first ARCA race at Kansas.

With his championship all but clinched, Gibbs is hoping to win once more to cap off what has been a historic season in ARCA history.

Will @TyGibbs_ get another chance to punish his General Tires after next week’s championship race at @kansasspeedway? pic.twitter.com/NS4HTHamt0

Corey Heim sits second in the points and has impressed this season as well. He has scored six wins, led the second-most laps, and has finished inside the top 10 in every race this season. Yes, his championship hopes faded due to his last podium finish coming in his victory at the Illinois State Fairgrounds. But Heim has finished on the lead lap in all but two races, with only one DNF. Heim showcased his talents as a wheelman this season, leading the points for most of it.

“It’s obviously not what we wanted,” Heim told Frontstretch about not winning the ARCA championship. “Regardless of that though, we’ve had a good year. Six wins, counting last year makes seven, had a whole 365 days with Venturini Motorsports. It’s nothing to write home about this year regarding championships, but we’ve had a really successful year as far as race wins.”

Heim’s rise to championship contender began last year at Kansas. He led a race-high 82 of the 100 laps to score his first career ARCA win and used that momentum to finish second in the ARCA points this year.

“Just going to go out and try to win the race,” he said. “Can’t really do a whole lot else other than that. Points situation is not where we want it to be of course. We’re going to try to go win that race.”

Nick Sanchez will finish third in the points and has been third-best both in top fives and top 10s. Sanchez’s experience bodes well for next year when he will return for another full ARCA slate.

Sanchez told Frontstretch he will be driving the same car his team used at Michigan International Speedway, where he finished third behind Gibbs and Heim.

“We bent a right front frame earlier this year at Kansas and still finished ninth,” Sanchez said. “I think we’ll finish either first or second.”

Sanchez has been pleased with his performance at tracks on the NASCAR series schedules. Indeed, those tracks matter for his career and Sanchez landed a part-time Xfinity Series schedule next year with BJ McLeod Motorsports.

Sanchez will have Rajah Caruth as a full-time teammate in ARCA next year too.

Caruth finished third in the ARCA Menards Series East points and has contested a part-time main ARCA slate, finishing a career-best third in the most recent ARCA race at Salem Speedway.

“The goal is to run all the laps and learn because this is my first time at racetracks like this, so I’m not going to learn if I wreck at lap 2,” Caruth told Frontstretch. “Run all the laps and we’ll see where we finish. I don’t want to tear anything up running for more [spots].”

Kansas will be the largest track Caruth has raced thus far in his budding career.

High wide and handsome at Kansas soon. To the fr6nt? pic.twitter.com/7iKdImO69r

His year can be summarized with one word: learning.

“Just getting adjusted to the length of races, having not a lot of practice, radial tires, heavier cars, a lot of things to get used to in addition to not having tests and experience in these cars like everyone I’m racing against,” Caruth said.

Brad Smith will finish a career-best fifth in the points. Smith told Frontstretch he is marketing this season to potential sponsors. For this Kansas race, it already has paid dividends.

Entering his 21st Kansas ARCA race, Smith has one goal: “Keep the car in one piece.” He has used the same car for the past three years, working hard to repair it and prepare it for every race.

Zachary Tinkle wrecked out of the Salem race, but this ARCA newcomer has earned one top 10 and filled in as the replacement driver for the injured Tim Richmond. In its debut year, the No. 27 team is eighth in the owners’ points.

Only seven of the top 15 in the ARCA points are entered in Reese’s 150.

The Reese’s 150 will take place on Saturday, Oct. 23 at 7 p.m. ET with TV coverage provided by MAVTV and available on TrackPass on NBC Sports Gold.

Correction: Frontstretch previously reported Tinkle would be running a brand new car gifted to Tim Richmond’s team from DGR. In actuality, the car gifted from DGR to Richmond is a plate track car that Richmond will drive next year in the season opener at Daytona. Tinkle instead will be driving a car for Wayne Peterson using his car and crew while using the No. 27 owners’ points. Frontstretch apologizes for the mistake.

Oh yes, it will be a historic season for Ty Gibbs to win the ARCA championship in what is basically a NASCAR Cup car with Cup technology and some special “tricks” thrown in for good measure.

No car that sits on the pole almost every week, pulls away from all the others on restarts, leads all the laps and wins almost every race can be completely legal.

So go ahead and win your championship but we all know how you did it.

I feel like a broken record stating this but there has been no proof that the No. 18 team is cheating. It’s arguably the most funded team in the ARCA garage with regular brand new equipment, a superbly talented driver, & a smart crew chief in Mark McFarland. So unless you can cite actual proof, please stop falsely claiming Gibbs & Co. are cheating.