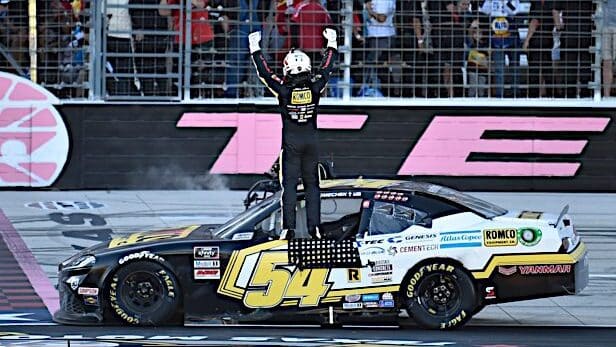 During a week in which an actual topic of conversation from NASCAR’s top series has been how hard is too hard to race a driver in the playoffs, the Xfinity Series continues to show itself to be the opposite. In the last four races, three of the winners have been non-playoff drivers: Josh Berry at Las Vegas Motor Speedway, Brandon Brown at Talladega Superspeedway and John Hunter Nemechek at Texas Motor Speedway. The only outlier was AJ Allmendinger at the Charlotte Motor Speedway ROVAL, and the Dinger at the ROVAL is like racing Bill Elliott in the 1980s at Michigan, to be honest.

In the latter parts of both last weekend’s (Oct. 16) race at Texas Motor Speedway and in September at Las Vegas, a stage was set — one for a driver running second that would clinch a spot in the next round with a win. All that needed to happen would be for the driver in front of them, which just so happened to be a teammate, to casually let them by.

It didn’t happen on either occasion. At Las Vegas, Berry took the win, just ahead of JR Motorsports teammate Justin Allgaier. Last weekend at Texas? Daniel Hemric‘s Holy Grail-like quest for a win was denied again with Nemechek taking the victory. It was a bit of déjà vu for Hemric, who saw a win vanish again just like at Atlanta Motor Speedway in July, where another Joe Gibbs Racing teammate took the late-race win by way of Kyle Busch.

“Thankful to know that I can leave it all on the like the few weeks with Joe Gibbs Racing,” Hemric, who is driving for Kaulig Racing next year, told NASCAR.com. “That’s what we’re going to do.”

Very, very easily, both race leaders at Vegas and Texas could have eased up and given way to their teammate running behind them. Obviously, taking an oddly-timed pit stop from the lead would have been too obvious. Insert your own Clint Bowyer arm-itch punchline anytime…

But what if either race leader, Berry at Vegas or Nemechek last weekend, would have mistimed a corner entry ever so slightly? After all, it would have certainly done Allgaier a huge favor at Vegas to have a win and not have to survive Talladega and the ROVAL for a spot in the next round, and Hemric wouldn’t be reaching for that Tums bottle this week when thinking about what his team has to do to make the Championship 4.

Like Allgaier, Hemric has to simply find a way in these next two weeks at Kansas and Martinsville to make it to the next round. He’s in that situation for one reason. That drivers in the Xfinity Series are not folding at the end of the season. They are not mailing it in. They are not content for a decent finish. They are bound and determined to win, and could care less if it means racing a playoff driver too hard.

One criticism that many feared when the playoff format was introduced in NASCAR was that it’d make all the other drivers irrelevant and make all that happened in the final races all about the title chase and nothing else.

Everyone in the garage has something to race for. Some are racing for a championship, others for an owner’s points finish, others for a job next year. That drive to succeed is magnified by part-time drivers like Berry and Nemechek with good pieces of equipment beneath them that are capable of winning.

Nemechek showed that on Saturday, that’s for sure. Remember, this is a car that’s won with almost every driver that has driven it this year. It’d be believable to think that Nemechek had a King Kong-sized burden on his shoulders given the car’s track record.

“Man, I can’t say enough about this whole team,” Nemechek told NBC Sports. “The 54 has been fast every single week. My goal coming in was to win. I had to win to prove to myself I can do this.”

When you blend together both drivers and race teams that are bound and determined to win no matter what, you get situations like the past few weeks where the racing is oh so much more than what goes on in the playoffs, and that’s exciting for race fans everywhere.