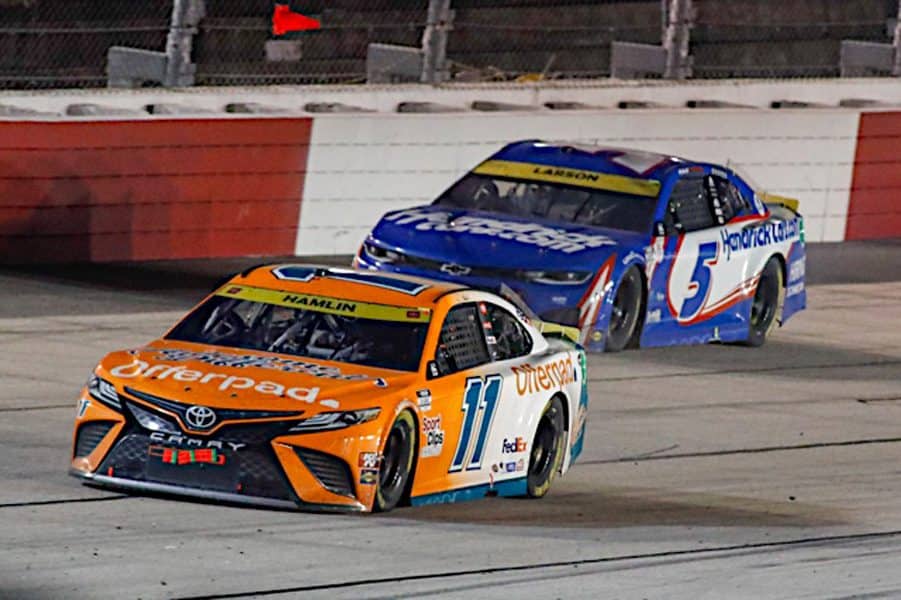 Way back in 2004, NASCAR devised a playoff system with hopes of one thing: attracting a demographic whose attention span, raised on information meted out in colorful bursts, was decidedly shorter than that of the long-term, traditional fans. The sport was riding a high as the water-cooler fad of the moment and wanted the wave to keep growing.

Having to follow a point system that took place over a whole year, they decided, was too much, and while it’s been changed several times, morphing into its current configuration, the playoff era was born.

With it came a new point system that was also designed to keep the field closer together. They threw in some extra incentives in stage points.

But was it overkill?

When the national touring series pull into Phoenix, they do so with a clean slate, because the playoff system includes a reset that sends the four contenders in each series into the final race in a tie, so that the title simply goes to the top finisher.

But here’s the thing: under the current points system but without the playoffs, you have that tie in the Cup Series right now. Kyle Larson and Denny Hamlin are deadlocked at the top in the traditional, season-long standings.

What you wouldn’t have is the four-way battle, as they’d be on top by more than 200 points.

But would you need it?

One of the biggest fan complaints in recent years has been NASCAR not always letting races play out organically, with liberal use of the caution flag to tighten up the field. So why not let the championship play out the same way? The one-point tally will keep contenders close — if they’ve raced well enough. Looking at the entire 2021 season, does anyone other than Larson or Hamlin really deserve a chance at the title? Realistically, no.

But Larson and Hamlin have been neck and neck all year long. Hamlin’s consistency has kept pace with Larson’s dominance. Why, then, should there be anyone else?

The simple answer is t-shirt sales and hopes of making more fans tune in to watch their favorites. They may or may not be selling fans short. Loyal fans of a driver are going to tune in and hope he wins no matter what. Casual fans might not tune in regardless.

Hamlin is actually in danger of falling out of the Championship 4 if he has a bad finish in the next two races. Like Kevin Harvick’s early exit last year, the drama that creates isn’t necessarily good for the sport. At this point last year, Harvick held a 140-point lead under a non-playoff tally, a number that would all but guarantee him the title.

And yes, it’s absolutely true that teams would approach the season differently under a different system — we’ve seen that happen with every change to the playoff system since 2004.

The one-point system does keep things appropriately close, and with tweaks it could reward winning a little more. Does NASCAR need both that and the playoffs?

It seems strange that fans would rail against unnecessary cautions, whether in the form of stage racing or phantom debris, but not against a point system that basically does the exact same thing to the championship race over the entire season. Is that actually happening (and if it is, seems hypocritical to say the least), or is that only NASCAR’s version of what fans want and not the full reality?

It all seems disingenuous. The best, most exciting races often happen because they play out organically, regardless of whether there are late cautions and restarts. Sure, you see some clunkers too, where a driver rises to the occasion and dominates. But that’s part of racing, and it’s preferable to having the race manipulated with cautions that aren’t caused by an on-track incident or visible debris.

So too, then, should the season play out. If there are two or more equally great cars in any given race, they usually show up at the end and create an exciting finish. And two or more drivers having the season of their lives are capable of doing that too.

The 2021 season has played out as it should with two drivers rising to the occasion, but we all know that phantom debris caution is just around the corner, and it’ll set off the restart NASCAR thinks it needs at Phoenix Raceway. Under the current points system the playoffs are nothing more than debris on track — that nobody but NASCAR can see.

To my way of thinking. Matt Kenseth was the last real Champion.

The chase/playoffs was an attempt to turn a sport into more of a reality television show or, maybe a fairer appraisal, a stick and ball sport. I’d love to see them get rid of the whole mess but I don’t think that is in consideration so we make the best of it.

The “REAL champion” is the driver that wins in the given system at that time. There have been multiple ways points have been accumulated throughout NASCAR history. The prior system may be your preferred system, but it was no more “real” than the current system. NASCAR also determined championships by paying points on track length. Points have also been awarded by the purse size. The notion that there’s one “true” system is like a phantom caution.

The law of unintended consequences when they changed the format to the stupid “playoffs”. NASCAR isn’t a stick and ball sport. It has never worked and how many less fans does the sport have now as a result of BZF’s “brilliant” ideas.

Bill B
Reply to  bob hartford

So if what you say is true, “that GM will win at all costs” thanks to NASCAR fixing it that way, then you are pretty much saying that the management at Ford and Toyota are idiots.
What else would you call a company that keeps spending money trying to win a championship that they know they can’t win because it’s fixed?

How can it be a “playoff” when some of the teams aren’t eliminated? I don’t see 32 teams on the field for the Super Bowl.

So some fans do see 32 teams on the field for the Super Bowl?

Actually before the playoffs drivers that had early success in the season would points race the second have of the season and if your driver wasn’t in the top 5 the fans stopped watching. I like the playoffs

Adding a contrived playoff remains the worst decision NASCAR ever made. Not so much because the original “Chase” format was a monumentally stupid idea, even though it was. At the end of 2003 NASCAR polled fans about the idea and the fans overwhelmingly rejected it. Jeff Gordon laughed at Brian France suggesting the idea…he genuinely thought it was a joke. Bill Jr. told Brian he was nuts for considering it.

Brian ignored the fans, one of the sport’s most popular drivers, and his father handing him a phenomenally successful sport, and went through with it anyway, because after all, he’s the marketing genius and knows better. His reputation as a sport’s leader among fans to this day is still mud because of it.

I don’t hate the current incarnation of playoffs as much, but they could have easily improved the points system to make for closer battles without potentially depriving one or more drivers having the season of their life of a well-deserved title. Let me design the points system and we’ll have great battles to the end for a title with at least two drivers.

Overall I was happy with consistency and hate playoffs where 1 race gets it all in last race; however I do like the stage racing, keeps the field from just following the leader and provides alot more action. I would like to see them intergrate the best of both. Not a believer in a regular season winner and a championship winner either.

There is a reason why F1 and Indy has been more popular in recent years. Sadly Nascar has become like WWE.

I had idea about this mess of a championship. Why not break the season into quarters and the winner of each quarter is the final four for the championship. If the same driver wins two quarters and two different drivers win the other two then there is only three drivers for the championship and so on. So if the same driver/ team won all four quarters then there are champion. That would make the whole season count again not just one or two races in the regular season and then final ten.