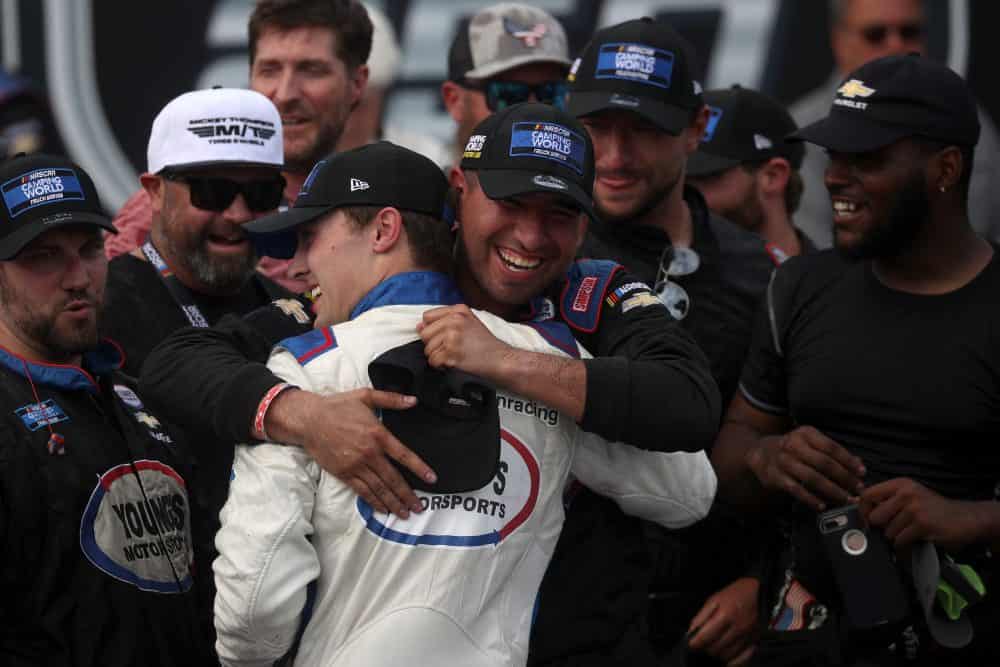 Just a few weeks ago, Tate Fogleman shocked the Camping World Truck Series and kicked off what became a weekend of first-time winners at Talladega Superspeedway. Now that he’s had a couple of weeks to let that victory sink in, he sat down with Frontstretch to talk about his career so far with Young’s Motorsports, what the win means for him and his future in the sport.

Beth Lunkenheimer, Frontstretch: Start with Talladega. Can you take me back through those last two laps on that last restart?

Tate Fogleman: That was crazy for sure. I’d raced three superspeedway races before and hadn’t finished one of them, so we weren’t really sure of the plan going into it. But we started like mid-pack — 20th, I’m pretty sure — and just trying to play it safe and work our way through there. Then there towards the end, we were sitting in good position.

We were running sixth before that last caution and then restarted third on the inside line the last restart. Coming through (Turns) 3 and 4, the outside line wrecked and went into the outside wall. It just left the (No.) 38 (Todd Gilliland), the (No.) 4 (John Hunter Nemechek), myself and the (No.) 56 (Tyler Hill) was behind me. The 4 got under the 38 and then it was just me and the 4 truck after that, and I knew if I got him off the bottom I’d have a shot at it. I went to the outside and saw him coming off the bottom and back down to the bottom. Then he started coming back down the track and then I didn’t want to go under the yellow line so I came back up just a little bit. We made contact there and then I was able to go on and win after that.

Lunkenheimer: You probably didn’t have time to think and it was just a matter of reacting. Now that you’ve had a couple of weeks kind of step away and look back on it, I’m sure you’ve thought about it. Would you do anything differently?

Fogleman: No, I really don’t think I would. Everything did happen so quick, I didn’t really even have time to think about it. I guess it’s just instinct at that point. I’m not really sure what kicked in, but whatever I did there I probably would do the same thing if it happened again.

Lunkenheimer: Of course a lot of people were critical saying you turned up into Nemechek. What do you say to those critics?

Fogleman: I mean, I never want to win a race by wrecking anybody. I know how hard it is to win these races, and if I was in his position, I wouldn’t want to just get wrecked like that. But you’re also coming down to the end of our race. He’s going to try to block, I’m going to try to get by him, then you come together eventually and that’s what happened. I definitely wouldn’t take back what I did, because nothing was done intentionally. It’s just part of superspeedway racing. There’s been countless wrecks coming to the checkered flag at Talladega and Daytona [International Speedway], so it’s just part of this type of racing.

Lunkenheimer: You’re in your second full-time season and now you’re a Truck Series winner. Now that it’s been a couple of weeks to sink in, what does that mean to you?

Fogleman: Yeah, it definitely means a lot. I mean growing up, I just raced short tracks a lot, [but] my family, they’ve been racing forever. I raced super late models since I was 13, so just to have a ride in the Truck Series meant a lot to me. Then to go on and win, it’s meant a lot and it’s definitely taken a while to sink in and realize that I have become a Truck Series winner. So it’s definitely special. I know it means a lot to my family, Young’s Motorsports and everybody that’s helped me get here.

Lunkenheimer: How did the deal with Young’s come about?

Fogleman: In 2018, I had met Tyler Young at super late model races. My dad had raced against him in the Hooters Pro Cup series. So I’d known of him, and then he actually watched me win the Thanksgiving Classic in 2017 at Southern National (Motorsports Park) in a super late model and we were able to talk after that.

Then in 2018, they had a few openings for a driver and they called me in middle of the summer. I ran the first race in 2018 at [World Wide Technology Raceway at] Gateway and then I ran two more races the rest of that year. In 2019, I just ran super late models because they already had a driver for that year. Last year, they had an opening so I ran the full season last year and then I’m gonna finish out the full season this year.

Lunkenheimer: How has it been coming into the Truck Series with basically no experience and having to adapt to not having the time to practice and qualify because of COVID restrictions?

Fogleman: A lot of people go the route of ARCA [Menards Seres] and stuff like that to get experience on bigger tracks, but I came straight from super late models, so it took a little bit to adjust. Then my first full-time season and after was probably the first race they started limiting everything. We didn’t get practice and definitely made it tough, especially for a team like Young’s Motorsports.

We definitely use the practice sessions we get to fine tune the truck because we don’t have all the resources the big teams have, a sim and everything to get the trucks dialed in. So practice really meant a lot to us and especially for me being a rookie and seeing these tracks for the first time, it would help a lot to have practice. But we did the best we could with what we had, and I think we did a pretty good job last season. Then to go get a win this year, I’m pretty happy with that.

Lunkenheimer: Do you have plans to be back with Young’s next year?

Fogleman: Right now, I just signed a deal with a late model stock car, so I’ll be doing that whenever I’m not, hopefully racing trucks. We’re still trying to figure out what I’m going to do next year if it’s trucks or not, but I know for sure I’ll be racing late model stock cars so I’m looking forward to that. It takes a little bit of the stress off when you’re looking for a ride, knowing that you’ll at least be racing something.

Lunkenheimer: For people who looked at you as the winner at Talladega and wondered who you are, what would you say to them? Who is Tate Fogleman?

Fogleman: Growing up racing, I’ve loved racing. I told people that even if I raced super late models the rest of my life, I’d be happy with that. I’ve just been around it for so long, it’s been part of my whole life really, something I really care a lot about and put a lot of time into. Just to be able to be in the Truck Series, like I said, has been a huge deal to me. And then to go on and win, it’s been crazy experience. Just to sit back and see how fast things have progressed over the last few years, it’s been humbling, and I can’t think that people that have helped me throughout this journey enough.

Lunkenheimer: Aside from those at Young’s, is there anybody else in the garage area, whether it’s drivers, other teams, maybe former drivers that you look up to where you lean on for advice and recommendations and suggestions as you’re trying to get used to each track?

Fogleman: In 2018, my teammate was Austin Hill, so I became pretty good friends with him. And he’s obviously been really successful in the Truck Series, so I’ve reached out to him quite a bit. He’s helped me out a lot going to these different tracks. And especially when I haven’t been able to see them for the first time, or I’m seeing them for the first time and I haven’t been able to race on them before, I go to him and just see what his thoughts are. I mean, just to get thoughts and ideas flowing from somebody else that’s driving it too, especially that has experience that I don’t have, I think it’s a benefit.

Fogleman: So I’m currently in my senior year at High Point University, Business Administration major. And then I also have a minor in marketing. I think it’s important in today’s society and racing just to be able to market yourself to sponsors. I know that driving and talent is a lot of it, but also just being able to get sponsors is a lot. So I think it’s important to be able to market myself and be able to talk to sponsors and just do the deal that you need to be able to do as sponsors showcase their companies and just be there for them just how much they are there for you.

Lunkenheimer: With just two races left, what are your goals to close up these last two races?

Fogleman: We’ll probably have a good starting position at Martinsville [Speedway] after winning Talladega. Track position will mean a lot there, so to get a good finish there after winning I think would mean a lot and show that I still can be competitive even in other tracks besides Talladega and Daytona. So just to finish out the year strong, I’d really like to get a good run at Martinsville and then a decent run at Phoenix [Raceway]. I mean, top 15s I think we’d be happy with those.

Lunkenheimer: Have you thought long term about your NASCAR career? I know you said you’re just happy to be racing in general, but is your ultimate goal to head to Cup?

Fogleman: Once you get to this point, I think everybody, or most people, want to make it to the Cup Series. I mean, especially for me, I’ve worked hard for this. I’m happy where I’m at in the Truck Series. But if somebody called me and wanted me to race an Xfinity car, I’d be happy to do that. Everything you do is to get to the Cup Series, but it comes down to sponsorship funding, stuff like that. So for me, I realized that it’s tough. There’s so many people that are trying to get there, so I’m happy with the opportunities that have been given.

Lunkenheimer: What’s fun for you outside of racing?

Fogleman: I always enjoy going to the lake. I’m an avid outdoorsman. I like bow hunting, bass fishing. Racing is an escape from everything for me, but when I’m not racing, I go to the lake. That’s kind of the same thing as racing for me. It’s just you can go there, relax and enjoy the outdoors. I’ve always loved hunting and fishing. So I just go into the lake and being able to fish them in the winter going out hunting trips is pretty fun for me.