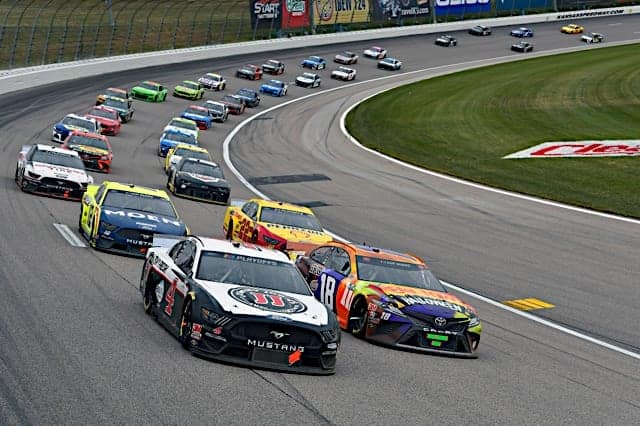 Who will come out on top between F1 and NASCAR?

This Sunday will mark a big test for Formula 1 as it goes head-to-head with the NASCAR Cup Series race on cable, and the National Football League when it comes to television in general.

Before the speculation, it should be obvious that NASCAR will outdraw F1 when it comes to overall viewership. They are the McDonald’s of this battle. The 18-49 demo, precious to TV advertising, will be where the real battle begins.

NASCAR should win that battle as well, but what F1’s rating this week will be will tell us a lot of what exactly this new boost in fandom has been.

A lot of people have subscribed to the theory that almost all of it is due to Drive To Survive, the Netflix reality show shot like a documentary. I don’t necessarily believe that is fully the case, because if these were mainly reality show fans, F1 would have women watching at more of a 40%-45% range rather than around a third of their audience being women. Just look at this chart from ShowBuzz Daily and just how dramatically skewed females 18-49 are to the top performing reality shows on cable and how that really isn’t the case with F1.

What else could that boost be?

My own theory is that, with the NASCAR 18-49 audience largely staying even or slightly up in the last year, at least part of this boost in F1’s demo viewership comes from new NASCAR fans branching out and becoming more overall motorsport fans.

Keep in mind just how popular Bubba Wallace is. Regardless of the people down below in the comments complaining about him, the reality is that Wallace moves merchandise and is one of the most popular NASCAR drivers active while also being its lone black star. Ditto with Lewis Hamilton, who is all of those things on the F1 side of things. Sky Sports also understandably builds its broadcast around Lewis if he is not leading the race, so it wouldn’t be out of the question for those new Wallace fans to pick up F1 without some of the preconceived bias a lot of the older NASCAR fans have towards open wheel.

Adam Silver is the smartest person in professional sports in America right now. He knows exactly what his audience is and what they like. Young, diverse, social media savvy. It’s no coincidence that the NBA has entered a promotional partnership with F1.

It’ll be very interesting to see if NASCAR fans pick the F1 race over a Cup playoff race. Or if the new F1 fans are actually more loyal to NASCAR and decide to tune in to Kansas.

If F1 were to actually win the day and outrank NASCAR in 18-49? I don’t personally think they do so, but if they were to pull the upset, we’re essentially back in the 1980’s when it comes to motorsport in America. Back then, NASCAR was still behind CART when it came to overall popularity. But they had signs of a lot of momentum incoming, and after a decade of things building, the moment when everything changed was when one superstar, a kid named Jeff Gordon, chose stock cars instead of Indianapolis. The resulting big bang blew stock cars past open wheel machines for decades to come. Perhaps that is going to play more in reverse here in the coming years, especially if F1 can get the piece to the American puzzle that it has found in countries like the Netherlands- a winning American driver.

"The way this has all gone the last four, five years with the new generation coming in has completely ruined it from what it used to be. It might be more exciting for the fans, but all you get it more torn up stuff." – @KyleBusch

Now, part of this quote can be attributed to Busch being a couple of generations now behind the newer drivers. Older veterans in any sport will complain that the new generation coming up takes things too far. But he’s not wrong in this case.

The ARCA Menards Series finale will be held on Saturday night (Oct. 23). That is a race where I think going in there’s almost certainly going to be somebody wrecking somebody. That is not something anybody should be thinking going into any racetrack, especially a track like Kansas.

As I have written before, this current incarnation of ARCA and refusal by both ARCA and NASCAR to actually curb out wrecks by penalizing drivers that do them in the spirit of “personality” and “boys having at it” is going to hurt the development of drivers long-term. Why should a driver in ARCA not pay somebody back at a high speed racetrack? What real repercussions are they actually going to face? If anything, NASCAR/ARCA should pay them because they’re going to use that footage for the next few years in highlight footage. Even though there is a racing series, F1, that has doubled its television audience in the last year and sold out Circuit of the Americas over a month before the race without relying whatsoever on building its brand around wrecks or fights. Gee, wonder how they did it?

Who will win at Kansas?

This week’s race at Kansas will be the third to last race in the playoffs, and must-wins for certain playoff drivers.

For Joey Logano and Ryan Blaney, this weekend is a must-win. Yes, even though Blaney is only behind Kyle Larson in points, it’s hard to feel comfortable heading into Martinsville Speedway next weekend. Why? Because they’d be racing against at least four of the five best short track drivers at the venerable Virginia short track- Martin Truex Jr., Denny Hamlin, Busch, Chase Elliott and Brad Keselowski– to get into the championship round. That’s a tall order for anybody in this series.

My pick to win this week is actually Keselowski. The two-time Kansas winner knows his way around this track, having led over 100 laps and nabbing three top five finishes in his last three starts there. Having watched the playoffs closely, Keselowski strikes me as a driver who is going to go all the way to at least Phoenix Raceway this year. He’s up front every week, he’s getting clean finishes, that car went from just 10 top 10 finishes in the regular season to five out of seven in the playoffs so far. And obviously, everybody on that team would like to see Keselowski, who played a key role into so much of Team Penske’s NASCAR success the past 10 years, go out well in his final starts with the team.