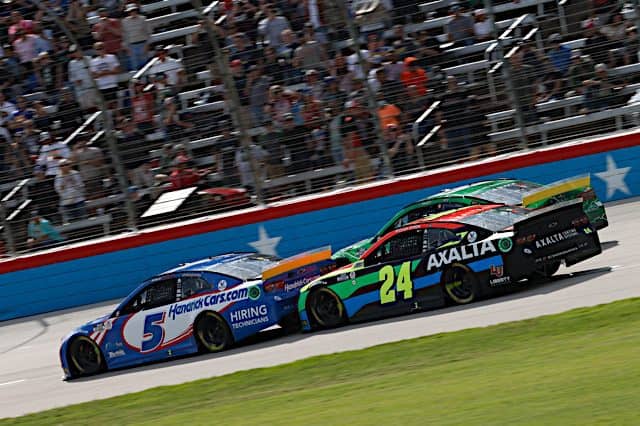 The NASCAR Cup Series heads to the final 1.5-mile racetrack of the year in the Sunflower State. Let’s set your daily fantasy NASCAR DraftKings rosters for Sunday’s (Oct. 24) race at Kansas Speedway.

It’s the second playoff weekend in the Round of 8 and second intermediate track in a row. Last week, Kyle Larson dominated at Texas Motor Speedway to claim his place in the Championship 4 finale, held Nov. 7 at Phoenix Raceway.

It’s also the second go-round of the season at Kansas, as Kyle Busch won the Buschy McBusch Race 400 in May. However, the results then don’t necessarily reflect each driver’s performance for much of the event. Some late cautions bunched the field back up, causing a few poor restarts from front runners in the sprint to the finish. It’s why you should look at loop data statistics like fastest laps and average position, seeing how the drivers performed at the 1.5-miler over the full course of the event.

Rain is also in the forecast on Sunday and could affect the competition on track. If it comes late in the race (after stage two or 134 laps, the halfway point), drivers might run a bit harder to ensure a good finish before precipitation comes. There might not be as many underdogs near the front if that happens, so you would need to have those stronger cars in your lineup.

Before I move onto my picks for Kansas, let’s see the results from last week’s race at Texas Motor Speedway.

Bubba Wallace crashed out early, and Denny Hamlin had a couple of run-ins with a few competitors, hurting this score. Hamlin’s car wasn’t fast enough this week to keep up with Larson, one of a handful of disappointing performances in this lineup.

A fantasy score of 275.65 was needed to double your money in the $1 Double Up contest, while 294.8 was the minimum cashing score in the $1 Happy Hour tournament.

How does the scoring work for this game? DraftKings lowered the points for each fastest lap to 0.45 this season, as well as the points awarded for first place to 45. DraftKings has also put more emphasis on drivers who finish inside the top 10 and top 20. For example, the gap between 10th and 11th place is now two points instead of one: 10th gets 34 points, while 11th gets 32, etc.

I didn’t want to make the same mistake as I did last week, so I’m playing the driver who’s an overwhelming favorite to win. Larson led 256 laps and posted 104 fastest laps en route to his win at Texas, resulting in a DraftKings score of 155.8. He also led 95 laps at Las Vegas Motor Speedway a few weeks ago, another 1.5-miler, although he wound up 10th.

At Kansas this year, the No. 5 Hendrick Motorsports driver looked to be well on his way to another victory but ended up trapped behind Ryan Blaney on a restart. Larson pushed Blaney a bit too hard, and they both lost several positions on the racetrack. Though he finished 19th, Larson was out front for 132 circuits and tagged on 67 fastest laps, salvaging his DraftKings score somewhat.

The California native also has a few good results at other Kansas races. In the 2019 fall race, he led 60 laps but ended up 14th. The year before, Larson earned two top-five finishes, leading 101 circuits in the spring 2018 event. His most recent top 10 came in the spring of 2019, earning an eighth-place finish.

Larson should have another strong car this week at Kansas. Don’t miss out.

Larson’s Hendrick teammate may not be in the playoffs anymore, but he still has a fast car. Byron led 55 laps and notched 57 fastest laps on the way to second place at Texas. As a result, he scored 91.4 on DraftKings, his highest amount of fantasy points since Michigan International Speedway in August. It was also the most laps led for Byron since his win at Homestead-Miami Speedway earlier in the year.

At Kansas, Byron has a streak of four consecutive top 10s going in his No. 24 Chevrolet. He was fifth in the fall 2019 playoff race, 10th and eighth in both 2020 races, respectively, and then ninth earlier this year. He also led 27 laps in the July 2020 event.

Though the statistics are not spectacular, Byron should still run up front and finish well. The bonus points for fastest laps should boost his DraftKings score, helping you cash your daily fantasy contests.

Reddick is also out of the playoffs, but that hasn’t stopped him from charging to the front. He’s earned top-10 finishes in three of the last four races at Las Vegas, the Charlotte Motor Speedway ROVAL and Texas. He also recorded 20 fastest laps in the last two 1.5-mile courses.

So far this year, Reddick wheeled the No. 8 Richard Childress Racing car to six top 10s out of the eight 1.5-mile intermediates NASCAR runs at. One of those was the Coca-Cola 600, where he recorded 18 fastest laps en route to a solid ninth-place result.

Reddick has only run four races at Kansas in the Cup Series, but he scored two top 10s there: a ninth in spring 2019 and a seventh earlier this year. Reddick also added 12 fastest laps in the latter event.

He’s a bit more pricey on DraftKings this time around at Kansas, however; Reddick’s last salary at the $8,000 mark was at Darlington Raceway last month. DraftKings knows how good this sophomore has been, raising the price accordingly. Still, it’s hard not to veer off course from picking him since he’s run well lately.

Last week at Texas, Hamlin squeezed Briscoe up the racetrack coming off a turn, causing the Cup rookie to drift into the wall and cut a tire. Briscoe still was able to finish 15th, his fourth top-15 performance in the last five races. Though the entire Stewart-Haas Racing stable has struggled much of the year, the Indiana native has earned several top 15s and 20s, including three top 10s in his first full-time season.

Briscoe doesn’t usually have very many quickest laps, so you won’t get a whole lot of points for that. Still, he’s reasonably priced once again and starts 19th, so he could have a good DraftKings score if he adds a little position differential bonus.

Suarez is starting Sunday’s race 16th thanks to some good finishes as of late. He’s earned three top 15s in the last four races, including a 15th at LVMS and a 10th last week at Texas. Plus, earlier this year Suarez crossed the line 11th at Kansas, 10 positions further up from where he began. While it has been an inconsistent year with this new organization, Trackhouse Racing Team, he drove the No. 99 to several finishes in the teens in the last couple of months.

The 29-year-old has three other top 20s at Kansas in nine races, which isn’t all that great considering six starts were with two top-tier organizations. Still, Suarez was seventh in his Kansas Cup debut in 2017, 14th in the spring 2019 race and 18th last July.

Chances are Suarez can sneak through a top-20 finish for your roster. Trust his recent performances with this first-year team building toward future success.

Buescher led 13 circuits at Kansas this spring before ultimately coming home eighth. Unfortunately, he’s been very up-and-down with Roush Fenway Racing over the last month or so. He was third at the Charlotte ROVAL and sixth at Talladega Superspeedway, but finished worse than 20th in four of the past six events. Still, he obtained a 15th at Michigan, 16th at Atlanta Motor Speedway and eighth at Charlotte in May, showing some decent strength on intermediates.

In other Kansas races, Buescher grabbed several top-20 finishes, including a sixth in fall 2017 and 10th in the spring 2019 event. An ability to advance his position may come in handy this weekend, as he’s starting 21st.

Buescher’s No. 17 Roush Fenway Racing team may be more focused on the Next Gen car and 2022. But he could still pull off a good result if the team has the right strategy.