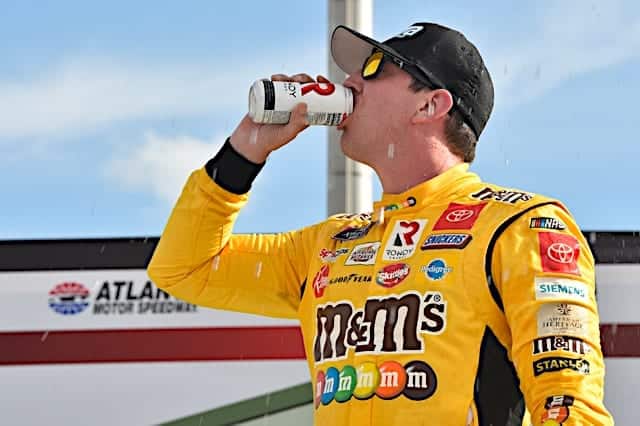 Kyle Busch is in the midst of a battle for his third NASCAR Cup Series title. But in a couple weeks, he’ll start his campaign for a championship in another racing discipline.

Monday Night Racing announced on Wednesday (Oct. 20) that Busch’s company Rowdy Energy would be the title sponsor for the series’ fourth season, which kicks off on Nov. 1. MNR also revealed that Busch himself will pilot his No. 51 full time in the series.

We're getting a little Rowdy?

Busch had dabbled in the series throughout its first three seasons but had never been full time.

“It’s cool to be able to support what the guys at Monday Night Racing have built,” Busch told The Racing Experts. “It’s a great group of iRacers from all backgrounds of the racing world that put on one hell of a show.

“Rowdy Energy has been supporting the iRacing community since we started, and we see it as an ideal fit from all the positive responses we’ve gotten from the fans and racers. Tune in, and let’s get Rowdy on Nov. 1.”

See also
Up to Speed: Kyle Busch Beyond 600 Starts

Now you might be asking yourself “What is MNR?” or “Why would KFB invest his own time and money into a league for a video game?”

Well, if you called iRacing a video game, then you just triggered a whole bunch of people (it doesn’t bother me), as it is a simulation and not a video game. And MNR just so happens to be one of the fastest growing sim racing leagues.

MNR started in 2020 during the time NASCAR was shut down for nearly two months due to COVID-19. iRacing got a lot of traction during that span, as eNASCAR Pro Invitational Series, featuring nearly the entire Cup field, started and was broadcast on national television. Interest in the Pro Invitational Series dwindled once real racecars could hit the track again, but MNR has continued its upward trajectory.

There’s also been pro athletes in the league from outside of racing, like former NFL player Bernard Pollard Jr. And joining this season is Oakland A’s pitcher Cole Irvin.

But what makes this league special is that it also includes others with jobs across the racing industry. There are crew guys, including Team Penske spotter TJ Majors, JD Motorsports’ Kase Kallenbach and Gabe Wood and Kyle Busch Motorsports’ Max Kennon. NASCAR employees Matt Stallknecht and DJ Cummings compete in the league as well.

Oh, and there’s also Frontstretch‘s very own Justin Melillo and … me. That’s right, you can catch yours truly getting up on the wheel of the No. 27 machine every Monday night.

Ugh, @justinmelillo beat me by that much … for 18th place.

Really fun @MonNightRacing throwback race though. I had a strategy that put me on the front row at one point and would've settled in at fourth for a while, but I got too tight and nailed the wall. pic.twitter.com/IfoBDOeCOC

This season, Frontstretch Motorsports will have three drivers in the MNR field: myself, Drew Welker and Garrett Miller. Welker works for an OEM supplier while Miller works for Goodyear.

In what other scenario do we see athletes and the media who cover them going head-to-head in competition on a weekly basis? And now it’s not even just an amateur competition.

MNR has become a professional league where cash prizes are given out. It has a broadcasting partner, Podium eSports, that has enlisted commentators such as Darrell Waltrip, Larry McReynolds, Adam Alexander and Dave Moody. Some of the late Bob Jenkins’ final calls were MNR events.

These broadcasts have reached five digits worth of viewers. It appears the eNASCAR Coca-Cola iRacing Series championship race got just over 28k views.

This league gets enough views that there’s actually sponsors willing to pay to get their brand on different MNR drivers’ cars. Eric Beaudoin served as my primary sponsor and a handful of other drivers’ sponsor last season.

With Rowdy now coming on board for the upcoming season, the league has become a very legitimate sporting league. It’s come a long way from where it was when Ford Martin and Paul Sutton created it.

Sutton, who works for Theory Communication & Design on the Mobil 1 Factory and Grassroots Racing program, told Frontstretch that it’s been crazy to see the growth of the league in just a year and a half.

Melillo has covered eNASCAR and sim racing for the past three seasons and has sim raced since 2006. His sim racing coverage is so in depth that he’s earned the nickname “eBob Pockrass.” Melillo told Fronstretch that landing Busch was not only great for the series, but sim racing in general.

“Kyle Busch is a name that race fans want to watch,” Melillo said. “And given his pervious races in the series, the camera will be on him a ton. It’s great exposure. I’ll be sure to race side-by-side with him as much as possible.

“Rowdy Energy signing on as the title sponsor continues to legitimize what sim racers have been craving for decades. Monday Night Racing does a great job of networking and bringing together many areas of the motorsports world on the iRacing platform. And this is just the next big step. I’m excited to be a part of it.”

I’ve been in MNR since the very first race. I didn’t even know Martin and Sutton before they started the league. I just happened to stumble upon a tweet where Martin was seeing if any motorsports industry people had interest in forming an iRacing league.

So I’ve seen first hand the growth MNR has experienced, and I’ve been in awe every step of the way. It’s gone from being lucky to get over 20 drivers to show up, to now it has a full field and a B-league, the Road to Pro Series, for drivers to get a chance to race their way into MNR.

Joining the league is one of the best decisions I’ve made. Not only is the competition intense, but the different car and track combinations the league uses always keep things from getting stale.

With today's announcement, @MonNightRacing has altered the 2021-2022 @rowdyenergy Season 4 schedule.

More importantly, I’ve formed some fantastic friendships from being in MNR. They’re all with people I either never would’ve met or spent quality time with otherwise.

Thanks to the relationships built from this league, I now have to run a West Virginia paint scheme the first race of Season 4, just because Affaunt and I bet on the West Virginia-Virginia Tech football game and I was on the losing end. But hey, racing against Busch, Lyons and Van Gisbergen on a weekly basis has gotten me pretty used to losing.

I’ll just happy with beating my “rival” Wilner this season.

Before our season gets started, we asked our drivers who their biggest rival was.

Interesting. I was a proponent of “sim” racing back when the first Papyrus came out in 1995 or so. My parent bought an IBM turtle of a computer and we raced, me in my favorite number, 59, Dad was 87 and she was 58 (her birth date year) we raced and raced and bought a wheel with pedals and all until they divorced. Then I moved on to Nascar 02, 03, 04, etc until CONSOLE gaming destroyed the computer industry for racing games. I heard of IRacing when it was founded but never had the $$$ to invest in racing in it but I did get the change to race with Dale Jr. in 1999 because he had a special account (being a celebrity). My server’s name was “Jill’s Shootout” in honor of a friend that passed on when I was younger–we even had a team that featured schemes of her sillouette and angels on the hoods. It was fantastic. Now, sim racing has gone to a point that I cannot keep up with the $$$ or the equipment. I wished I could. Anyone else remember Coca-Cola Speedway from N2K3? I haven’t been able to play a sim racing game since 2018 (thanks lightning storm and a faulty friggin’ surge protector) but I have still remember the thrill (since I am never going to be rich enough to race a real car, though have done a few dirt races in NC). Thanks for the read and good luck!

i will only watch real racing, i will play a video race game, but i will never waste my time watching someone else play a game