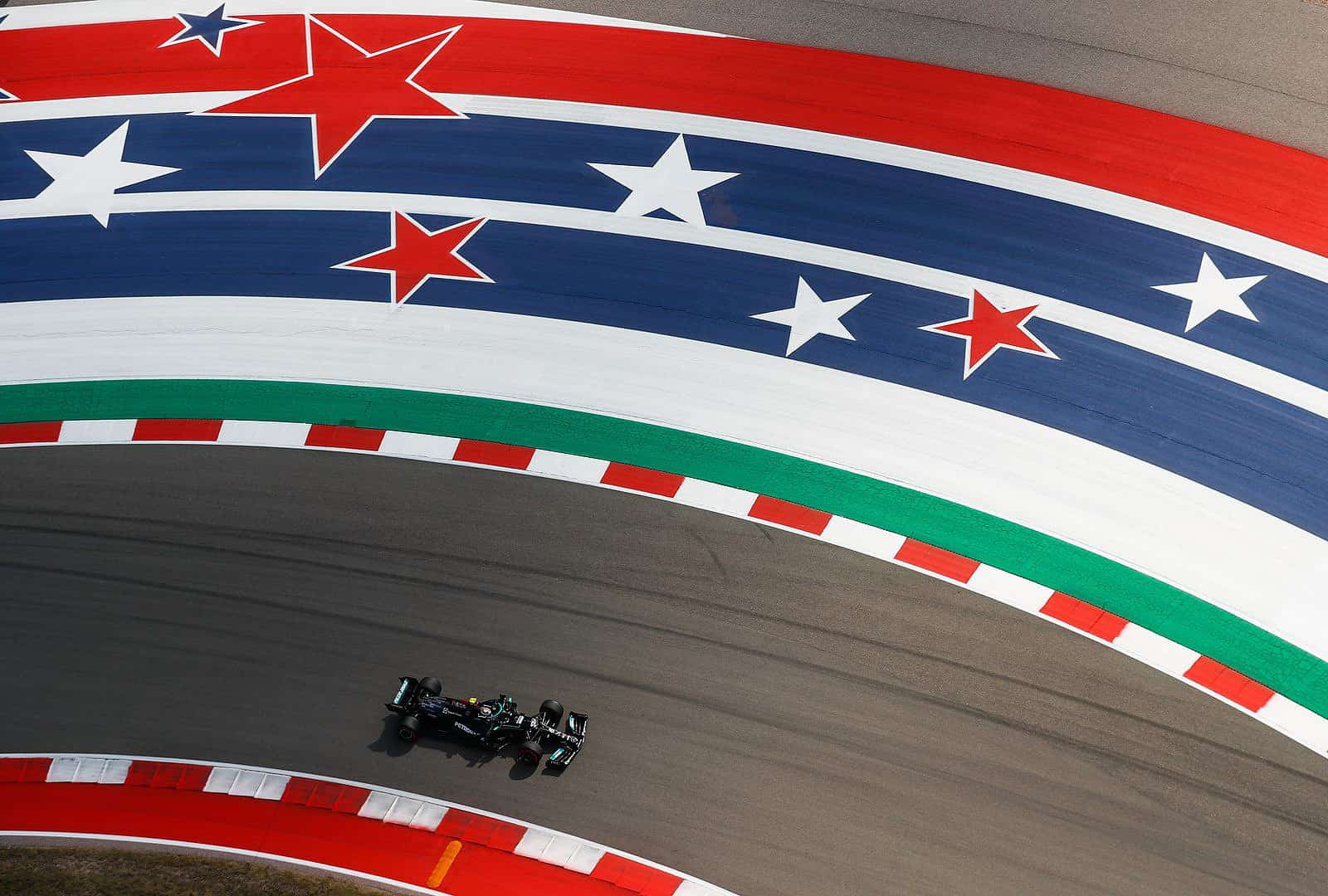 After a hiatus brought on by the COVID-19 pandemic, the series has returned and brought with it the drama of a close title battle. While Lewis Hamilton and Max Verstappen may be stealing the spotlight, that does not mean that the lights are not shining on other parts of the series.

Take, for instance, that the top two on the leaderboard after FP2 were Sergio Perez and Lando Norris. Neither name is a surprise, and it shows that Hamilton and Verstappen may have some company in snagging the pole for the race on Sunday, Oct. 24.

The bright spots for everyone are that the crowds at Circuit of the Americas look bountiful and the race on Sunday is a sellout.  Whether it is because fans missed the race, new fans are coming because of the Netflix show Drive to Survive or because it is compelling racing does not matter. Because having a successful weekend such as this one will be encouraging for the sport to hold more races in the U.S. beyond Texas and Miami next year.

Odds & Sods for the USGP Weekend

– Has Mercedes figured out a new trick? According to Red Bull team principal Christian Horner, Mercedes has found a way to increase their straight-line speed and Red Bull is unable to match. He noticed the change in Turkey but feels it is more apparent in Texas.

Speaking with Sky Sports, Horner said, “I think that Mercedes are obviously optimising a straight-line device that they’re able to do at that type of circuit. If you look at the rear of their car, you know, how it lowers. I think [Turkey] played to their strengths.”

Innovation is the name of the game, but for Mercedes to break out such a device, as Horner calls it, would seem rather stunning. The investment of resources to develop such a device would go against their focus on 2022 and would remove resources while also opening itself to penalties that might derail 2021.

Whether the team has found a way to have such movement occur or Red Bull is simply blowing hot air is still up for debate. Mercedes has been crafty before, note the implementation of the dual-axis steering component in 2020, but Red Bull has been griping about anything it can for the entire year.

Maybe both teams are just playing to their strengths.

– The long season is wearing down resources and can be found in how many engine replacements came about for the beginning of the USGP weekend. Valtteri Bottas will endure his third penalty in four races for an engine replacement. While Bottas will only move five spots back, Sebastian Vettel of Aston Martin and George Russell of Williams will start from the back after taking new Mercedes power units.

Mercedes is nervous regarding their engine reliability, and the moves are the best way to protect against DNFs, but hardly offer confidence for Hamilton as he moves forward. In another blow to the team, Mercedes saw Bottas finish FP1 in first and will be disappointed that he will not be able to capitalize on what looks to be a strong car.

– Fernando Alonso, the only F1 driver in the field with NTT IndyCar Series experience, was asked what he thought about Colton Herta, the 21-year-old who earned three wins during the 2021 season. Herta had himself in contention for the Astor Cup but stalled out with three races to go and wound up fifth. Driving for Andretti Autosport, he looks to be the new star of the team.

Rumors continue to circulate that Andretti is in the process of acquiring Sauber–Alfa Romeo. The move would come through Islero Investments, which runs the team, but would lead to Andretti being the controlling force behind the team.

Bottas has stated that he was unaware that Andretti might be taking over the team but came across as non-plussed by stating, “…as long as the team has the right people, key people, in there that I believe can do a great job – that’s the main thing for me.”

Bottas is choosing to focus on the things that matter to him, and in this case, it is that S–AR is an underperforming team that currently sits ninth in the standings and has scored a paltry seven points. The goal is to bring the team from the depths of the grid and make it competitive, and if a new owner is going to supply the resources to make that happen, it is what any driver would want.

His comments about the matter avoid another surprise element of Herta joining the team should the Andretti acquisition go through. Bottas makes no mention of the idea. But Alonso was happy to share how he feels about the notion.

“He would be a good fit for Formula 1 for sure,” Alonso said. “But each of us has a different plan in his career, and I don’t know what Colton’s is in his head at the moment. Because I’m sure that he’s happy with IndyCar, same as Alex Palou, who won the championship this year, and he’s really committed to the U.S. racing and enjoys racing here in the States.”

Alonso touches upon the big question surrounding such a curious idea: what are Herta’s plans? He has yet to speak regarding the Andretti takeover or the opportunity to race in F1. His silence may not be surprising, but there is another question that surrounds such a move.

Would he actually want to go? Marshall Pruett questions such a move, noting that driving for Andretti in IndyCar gives him an opportunity to win every time he shows up at the track. Driving for Alfa Romeo, however, relegates him to racing for finishes outside the top 10 and scrapping just to be able to see any points on the season.

If the goal is a long career in F1, AR may be a good stepping stone, but if the goal is to win races and cement himself as the mega talent he seemed to be, then IndyCar is his best bet.