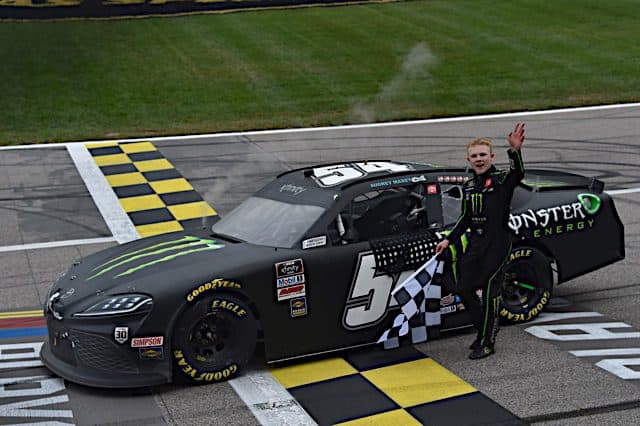 The No. 54 Joe Gibbs Racing Toyota once again showed off its rockets as Ty Gibbs cruised out front late in the final stage to secure his fourth win of the season. Gibbs became the youngest driver to get four wins in the NASCAR Xfinity Series.

Austin Cindric was the most dominant driver of the day but finished in second.

“I just feel like he got a little bit free and just kind of slowed down a little bit in (turns) 3 and 4,” Gibbs said after the race. “I could just get to his left rear and just side draft him and get away from him. Luckily I pull out with it. I got loose a couple of times over there but I was just trying to give it my all. Just trying to come back with the win. To have four wins this year in the Xfinity Series is just unbelievable.”

AJ Allmendinger finished third after a tough day with handling issues. Justin Haley, who also struggled during the race, finished fourth and Ryan Sieg was fifth.

Daniel Hemric led the field to green to lead the opening lap. However, it didn’t take long for Cindric to take command in his Team Penske Ford. Stage one had some good battles in the top five but stayed clean until after the competition yellow. With 17 laps remaining, the No. 48 machine of Jade Buford made contact with Dylan Lupton and took a hard spin into the wall.

Buford was able to walk away under his own power. pic.twitter.com/6kI4fKoUE9

The race restarted with nine to go in stage one and a sprint to end the stage was underway. Hemric and Allmendinger battled and swapped the lead and Allmendinger got it and kept it with one lap remaining to win the stage.

Cindric captured his 11th stage win in stage two of the 2021 Xfinity season. Cindric commanded the lead for the stage but faced a challenge in the final portion from Gibbs. Weaving and cutting through lap traffic increased the intense battle as the Joe Gibbs Racing Toyota that’s been fast all season stalked and waited for a mistake to capitalize. However, the reigning Xfinity champion held on for the stage two victory.

Starting the final stage, Hemric led the field to green after Gibbs won the race off of pit road but was sent to the rear of the field for speeding. Coming out of turn 2, Hemric got loose and spun as well as Noah Gragson. Myatt Snider was able to avoid contact.

Daniel Hemric and Noah Gragson have some damage after this crash exiting Turn 2 at @KansasSpeedway!

Cautions were the theme in the back half of the stage. After the race went back to green, Harrison Burton, who needed a win to advance to the Championship 4, battled for the lead with Cindric. Burton just about had the pass made until the caution flew for Joe Graf Jr. spinning. Pit stops cycled through and shortly after green, Mason Massey spun around to bring out another caution.

Trouble right in front of the leaders!

Graf and Brandon Jones had separate issues after restarts; Graf lost a tire carcass and Jones went around on the following restart.

This could have been SO MUCH WORSE!

Things remained calm as Cindric drove away from the field. However, an intense battle for third between Gragson, Burton, and Sam Mayer resulted in Burton getting hit by Mayer after an aggressive pass and collecting Gragson into the wall for a hard hit. Mayer survived and made it out with no damage.

Burton and Gragson both are able to climb out of their cars after big hits for the two #NASCARPlayoffs contenders. pic.twitter.com/KRlgdbXXJa

The @JRMotorsports driver takes ownership for the crash that took out playoff contenders Harrison Burton and Noah Gragson. #NASCARPlayoffs pic.twitter.com/EwDIdMCMWF

Cindric and Gibbs battled for the lead after the final green flag. Gibbs took it away and cruised into his fourth win of the season.

The NXS’ penultimate race of the season is at Martinsville Speedway on Saturday, Oct. 30 at 6 p.m. ET. NBC Sports Network will provide television coverage.

Young Mayer is an unguided missle

Very true but they say it’s easier to slow a guy down than to speed him up and that seems to be the task for the team with Sam. I hope he gets it together though, because I see him as a great foil to Gibbs and we’ll need something to break up all the fawning over him we’ll be forced to endure next year. That said – he won’t spend much time in the B league.

My dead grandmother would win in the 54!

Why couldn’t Ty Dillon do anything in Car 54?
A lot of credit and recognition should go to the builders of Car 54.

If I were to hazard a guess, I’d say it’s because his last name is Dillon and not Gibbs.