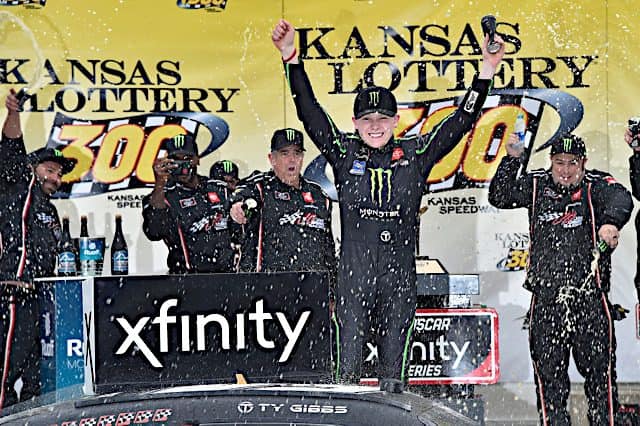 There’s no place like Kansas. Since the playoffs were introduced to the NASCAR Xfinity Series in 2016, Kansas Speedway has been a Round of 8 race. And every year since 2016, no fewer than five playoff drivers have suffered issues. Saturday’s (Oct. 23) Kansas Lottery 300 saw six drivers experience something that put a kink into their day.

On top of that, Ty Gibbs won the race, his fourth win of the season. For the second race in a row, a non-playoff Xfinity Series driver won the race. Gibbs’ victory was achieved on lap 190. He passed 2020 Xfinity Champion Austin Cindric for the lead, keeping the Team Penske driver from securing his spot in the Championship 4 to defend his title.

NASCAR has made multiple attempts in a variety of ways to lower costs to Xfinity Series teams in recent seasons. One of which has been tire allocation for each race. In some races in 2021, teams have only been given four sets of tires for the whole race, and one goes on the car to start the race. That left the strategy game at a non-existent level. If teams were given four sets of tires and one went one to start the race, that meant that a set was going on at the end of stage one, at the end of stage two, and somewhere in the middle of the third and final stage.

In Saturday’s race, teams were given five sets. One of these sets teams put on to start the race. Five sets opens the door for crew chiefs to tinker with when to change tires. The front running teams changed tires during the two stage cautions. Some were forced to make an unscheduled tire change for spinning, but overall, the door was left wide open to make two tire changes in the final stage.

Races in the Xfinity and Camping World Truck series are more interesting when five sets of tires are allocated to teams. Not only can crew chiefs go off sequence but there is a mulligan set in there too. When Hemric and Gragson spun at the beginning of stage three with just over 100 laps to go, they had to change tires. Without the extra set, each would have put scuffed tires somewhere in the middle of the stage.

Having five sets afforded the struggling Kaulig Racing teams of Allmendinger and Haley to stay out during a caution with 46 laps to go. They banked that another caution would come out. If that caution came out, which it did, they would pit and put their last set of tires on. When that caution came out, it turned Allmendinger and Haley’s top-10 runs into a top-five day.

Allmendinger’s point situation primarily benefitted from Gragson and Harrison Burton crashing, but Haley was nowhere near a top-five car. The ability to save a set of tires for a late-race caution vaulted Haley from having a double-digit points deficit to the cutline to less than 10.

More tires may be expensive, but they make the races far more exciting to watch.

It’s been five weeks since Nutrien Ag Solutions announced it would not return to Kaulig in 2022. It has sponsored Jeb Burton this season, who confirmed the news to Frontstretch on Oct. 11 that he would not return to Kaulig next season. After an early exit at Las Vegas Motor Speedway in September essentially prevented Burton from advancing out of the Round of 12 in this year’s playoffs, Burton has finished seventh, 13th, 11th, and 12th in the four races since.

Those finishes aren’t horrible by any means, but since his win at Talladega Superspeedway in April, Burton has struggled to put more than two or three top-10 finishes in a row together. For a driver looking for a ride next season, he needs to not only knock out top-10 runs but also make noise by competing for wins. Arguably, Kaulig Racing’s biggest weakness is its intermediate track program, and all of Kaulig struggled for speed at Kansas on Saturday.

Burton was eliminated from the playoffs after the Charlotte Motor Speedway ROVAL, and broadcasters tend to only focus on the championship-eligible drivers at this point of the season. That makes contending for wins that much more critical, yet Burton was essentially an also-ran this weekend. Even running better than teammates Allmendinger and Haley would have been a great day, but that didn’t happen. While his teammates averaged top-10 runs, Burton spent most of the day outside the top 10.

The debate over the past two weeks has been how non-playoff drivers should race drivers in the playoffs. That debate will continue this week. Aside from Gibbs’ aggressive but clean driving, the troubles suffered by playoff drivers and teams were isolated to themselves. That changed on lap 178.

Gragson was valorously holding off fellow playoff driver Harrison Burton and non-playoff driver (and JR Motorsports teammate) Sam Mayer for several laps. The trio raced three-wide multiple times at all points around Kansas Speedway. Gragson maintained second by keeping his car on the high side through the corners. His car was wounded and was on older tires compared to Burton and Mayer.

Their battling brought Gibbs to their bumpers. Gibbs’ stronger car quickly passed them, leaving the trio to continue their battle. A few laps after Gibbs went by, Burton had a full head of steam and split Gragson and Mayer down the frontstretch. Mayer drifted up to get behind Burton but misjudged how close the nose of his Chevrolet was to the rear bumper of Burton’s Toyota.

The slight contact from Mayer was enough to turn Burton to the right and into Gragson. Both crashed into the outside wall – Burton head-on. Each climbed out of their cars under their own power but lost a significant amount of ground on the cutline. Burton was already facing a must-win situation at Martinsville Speedway, but Gragson was flirting with a single-digit point spread to the cutline. At the time of the crash, he was above the cutline.

Mayer’s misjudgment, while not malicious, severely altered the playoff landscape. Gragson was on the verge of being able to race for points at Martinsville. Burton may have been able to do the same, should enough drivers suffer issues in the opening stages next week. However, Burton leaves Kansas 51 points below the cutline, and Gragson, while only 24 back, could make it in the Championship 4 if one or two drivers above him suffer issues early in the race.

In a post-race interview with NBC, Mayer owned his mistake that triggered the crash.

See also
Xfinity Championship 4 Still Up for Grabs After Kansas

Ryan Sieg played the same strategy that Kaulig teammates Allmendinger and Haley did: save a set of tires and gamble on a caution. That caution was the one involving Noah Gragson and Harrison Burton. Sieg pitted during the caution, and his team put his last set of sticker Goodyear tires on. Sieg would restart 15th.

Sieg was having one of his better days of 2021, running around the top 15 mark for most of the race. His only top five was back in April at Talladega. Taking advantage of the fresh tires, Sieg marched toward the front behind Allmendinger and Haley. Using tire strategy to take his 13th-15th place car to fifth is equivalent to winning this season for his team, who captured a career-high seven top-fives in 2020.

Saturday’s Kansas Lottery 300 was also the first time since June at the Mid-Ohio Sports Car Course that Sieg has finished in the top 10.

“We’ll go to Martinsville and try to kick their tail.” – Harrison Burton

“I’ll get the situation from today handled, and we’ll go to battle next week as a team.” – Noah Gragson

“I’ll take full credit for it (the crash)…It was my fault. My mistake.” – Sam Mayer

Kansas Speedway has quickly become just as big of a wild card as Talladega or the ROVAL for the Xfinity Series. There were pit road struggles for Allmendinger and Allgaier. Hemric and Gragson tangled to start the final stage. Jones spun with 42 laps to go on old tires. And Harrison Burton’s day, along with Gragson, ended in a crash. The ability to strategize tires saved Haley’s day. Cindric was the dominant car but ultimately finished second to non-playoff driver Ty Gibbs.

No playoff driver had a perfect day. Maybe that’s why NBC Sports put this race on the big NBC. It was drama-filled. Even when it would mellow out, the Kansas Lottery 300 found a way to inject crazy back into the race. Next season the race moves from late October to early September. Warmer temperatures are likely. A slicker track will only make this race more exciting.

We know at least three drivers will advance to the Championship 4 race at Phoenix Raceway on points. With no driver clinching their way to Phoenix on points Saturday, stage points will be necessary at Martinsville for some, while others are driving to win. Cindric and Allmendinger are both 47 points above the cutline. If they score stage points and finish in the top 10, they will likely race for a championship at Phoenix.

Gragson, Jones, and Harrison Burton will arrive at Martinsville with one goal in mind – win. That’s their best shot at staying alive for a chance to win the title. The hot seat falls to Allgaier, Hemric, and Haley. Allgaier is nine points above the cutline, followed by Hemric, who is plus seven. Haley is seven points below the cutline. Their teams will monitor the points situation throughout the race at Martinsville.

The 2021 season has been an exciting one, and it’s only fitting that no driver is safe from elimination heading into the penultimate race.

It’s crunch time for the Xfinity Series playoff drivers. Two hundred and fifty laps around Martinsville is the only thing standing between four drivers and the Championship 4. The Dead On Tools 250 is next Saturday, Oct. 30, with coverage beginning at 6 p.m. ET on NBC Sports Network and MRN. The season will conclude the following weekend, Saturday, Nov. 6, at Phoenix.

The whole playoff/nonplayoff driver debate just emphasizes how silly a playoff is when everyone is still competing.